For years the two widows, one Hindu and the other Muslim had battled false accusations of being Bangladeshis 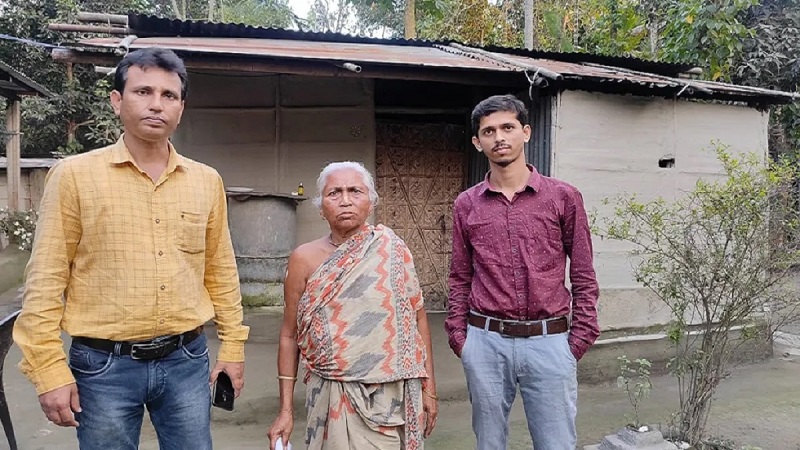 Two more Indian women have been prevented from the dreaded plight of statelessness by the prompt and timely interventions of CJP’s Team Assam.

The first, Jamila Khatun, belongs to the Bengali-speaking Muslim community in the state; the second is Usha Baishya, who belongs to the Bengali-speaking Hindu community. Both of them are widows and have been targeted by an insensate state. On December 18, 2022, CJP’s Team Assam delivered them the copy of the judgements declaring them to be Indians!

It was the legal battle led and supported by the CJP’s team at the Foreigners’ Tribunals (FTs) that restored their Indian citizenship. Jamila Khatun was served a “suspected foreigners” notice from Bongaigoan FT through the Bongaigoan Border Police who also summoned her to prove her citizenship. The CJP’s para-legal and legal team stood by her at the FT to ensure that she got justice. Jamila is a daughter of Joynal Sheikh and Mayjan Bibi.  She was born in the year 1950 at village Nagarjhar under Dakshin Bijni of the previously undivided Goalpara district (presently Bongaigoan District).  She was later married to Kuddus Ali of Naitara Beel under undivided Goalpara District in the year 1973. Again in 1985 she shifted back to her birth place with her husband. During the hearings, the Tribunal authenticated the documents submitted by Jamila Khatun in support of her statement. The tribunal found that the names of her parents Joynal Sheikh are recorded in the 1965 voter list. This proved unequivocally that they were sons of the soil. The Tribunal also examined the Jamabandi Copy of the land owned by them, in which Jamila Khatun’s name has been recorded as a Pattadar. Apart from these documents, the Panchayat Certificate issued the Secretary of Gaon Panchayat also established the linkage between daughter Jamila Khatun and her  father, Joynal Sheikh.

The very process of “proving her citizenship” however affected her mental health, she suffered from trauma and sleeplessness, unable to live a normal life. Unable to accept that she could ever be declared a foreigner in the country of her birth, she was actually admitted to hospital for treatment when the judgement of the FT was delivered. She has become frail and weak; the trauma of receiving a “Foreigner Notice” and the dilemma of non-citizenship affected her deeply. Durning the hearings of the case, we at team CJP compiled her documents and legal team member, advocate Dewan Abdur Rahim argued her case before the Foreigners Tribunal. Finally, she was then declared Indian. 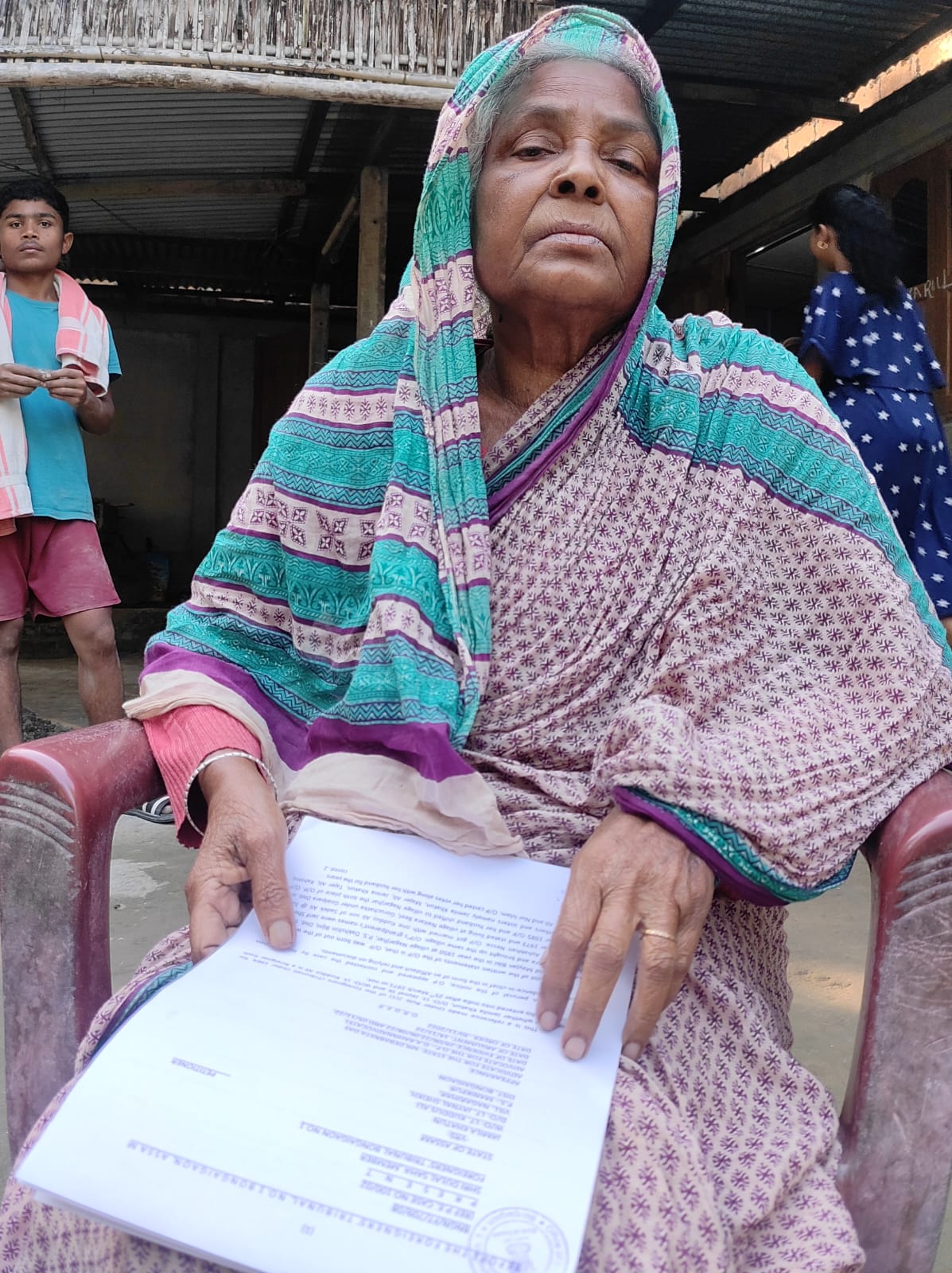 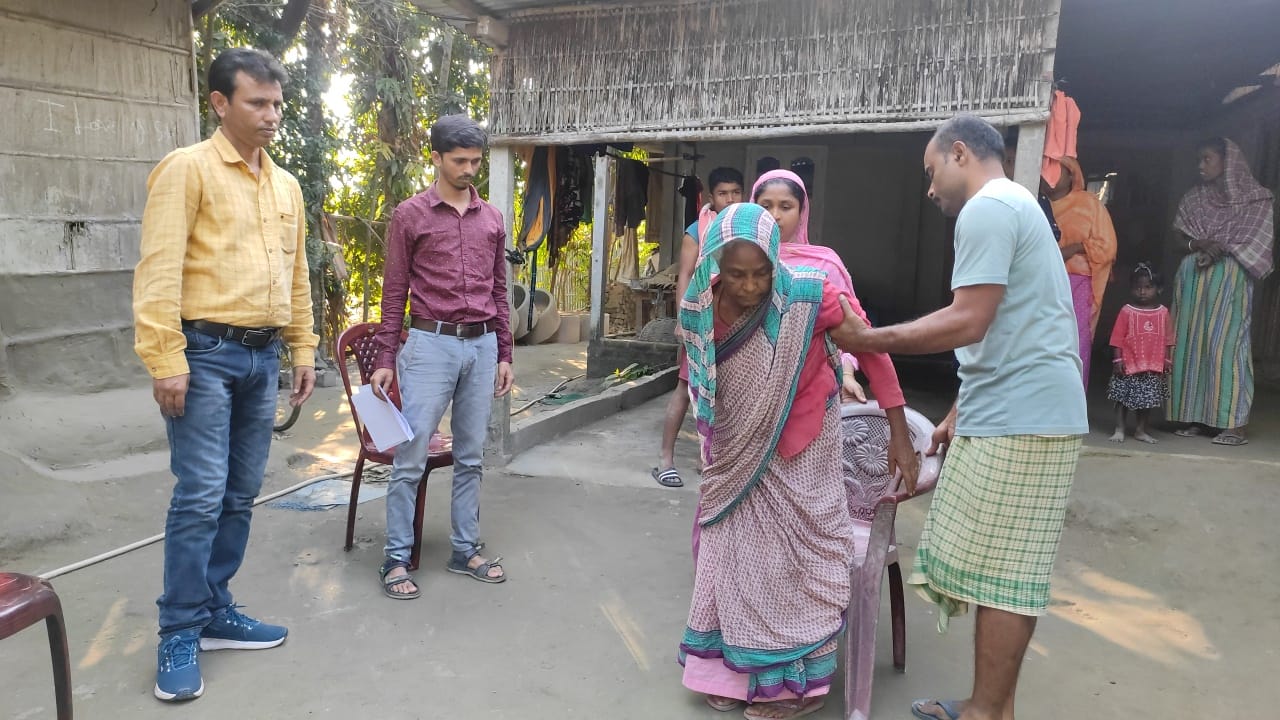 Usha Baishya is another Foreigners tribunal victim who got  a FT notice from Bongaigoan Foreigners tribunal.  Usha was born at the Kuslaiguri village that falls under the Manikpur Police station  of Bongaigaon. Her father Adhar Baishya @Adhar Chnadra Baishya was also a resident of the same village. Her father had cast his vote from 1966 until 2008, the year of his death.

Not only does Usha hail from an economically deprived section, but these conditions precluded her from accessing school education. She was married to Gopal Baishya in the year 1970. Her husband was a simple man, who worked hard throughout the day to keep his family secure.  Like all persons, Usha also wished for a prosperous married life at 2 No Patkata, which falls under the same police station and same district i.e Bongaigaon.

However, life started to test her patience from the early 1980s. Those were the tumultuous years of the Assam Movement, when their little hut was set on fire; she along with her family had to flee run leaving everything behind. They couldn’t save any document, only their lives. Usha Baishya still recalls those frightening  days, “We couldn’t save anything, people were screaming fire, fire!” “I picked up my children and ran. We took shelter far away at a school with just the clothes on our back, that’s all. ” Usha then added, “There is a village some distance from here. We first fled there for shelter; local Muslims, some Sheikhs fed us till government took us to a shelter/relief camp.”  Like thousands of Indians, Usha Baishya and her husband, Gopal Baishya devoted their lives to keeping afloat feeding their family and building a future. The first blow was when they returned from the shelter/relief camp to their village after some months: they found their home burned to ashes. Then follows the shock and trauma of being served a foreigners notice. 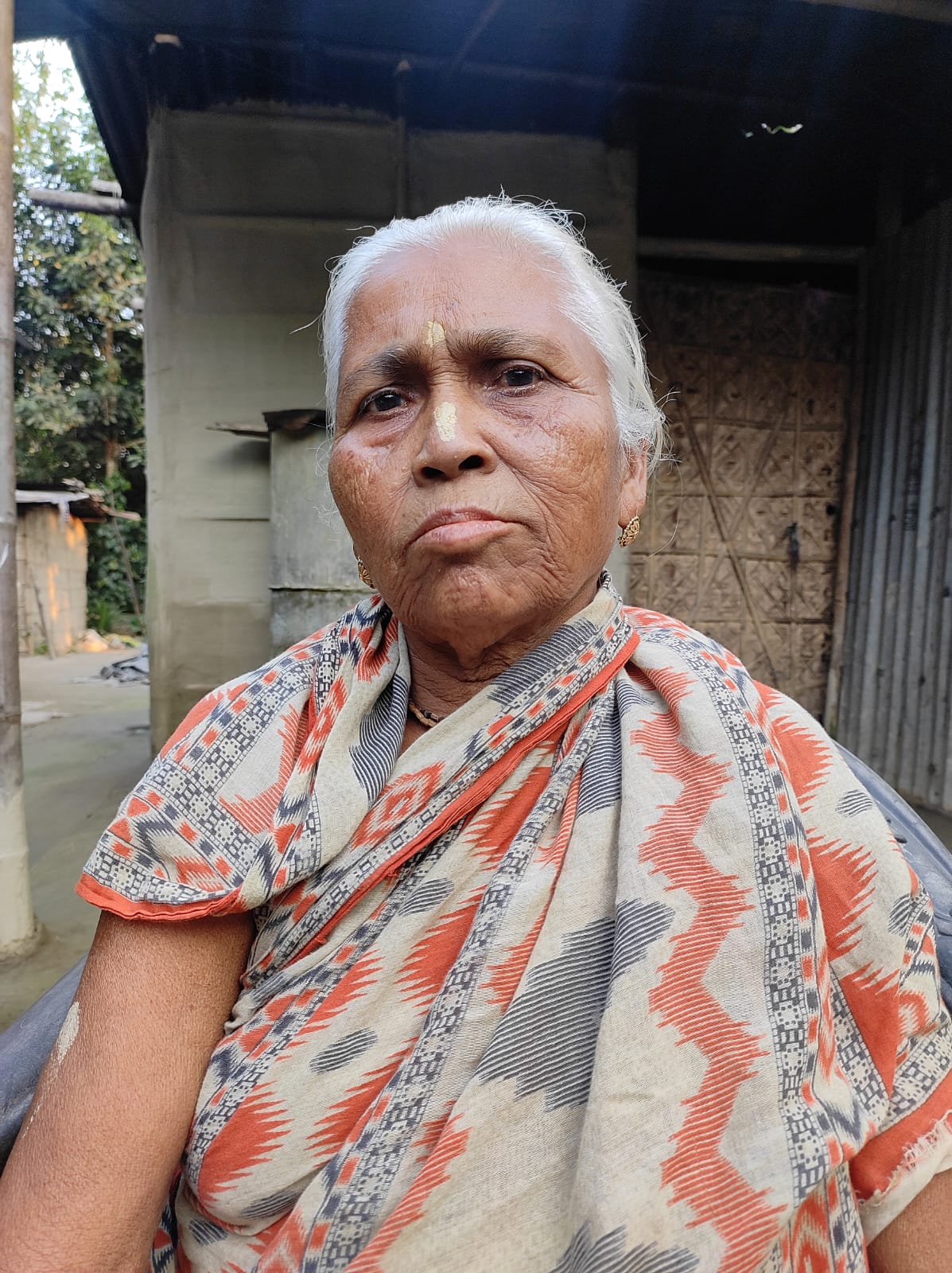 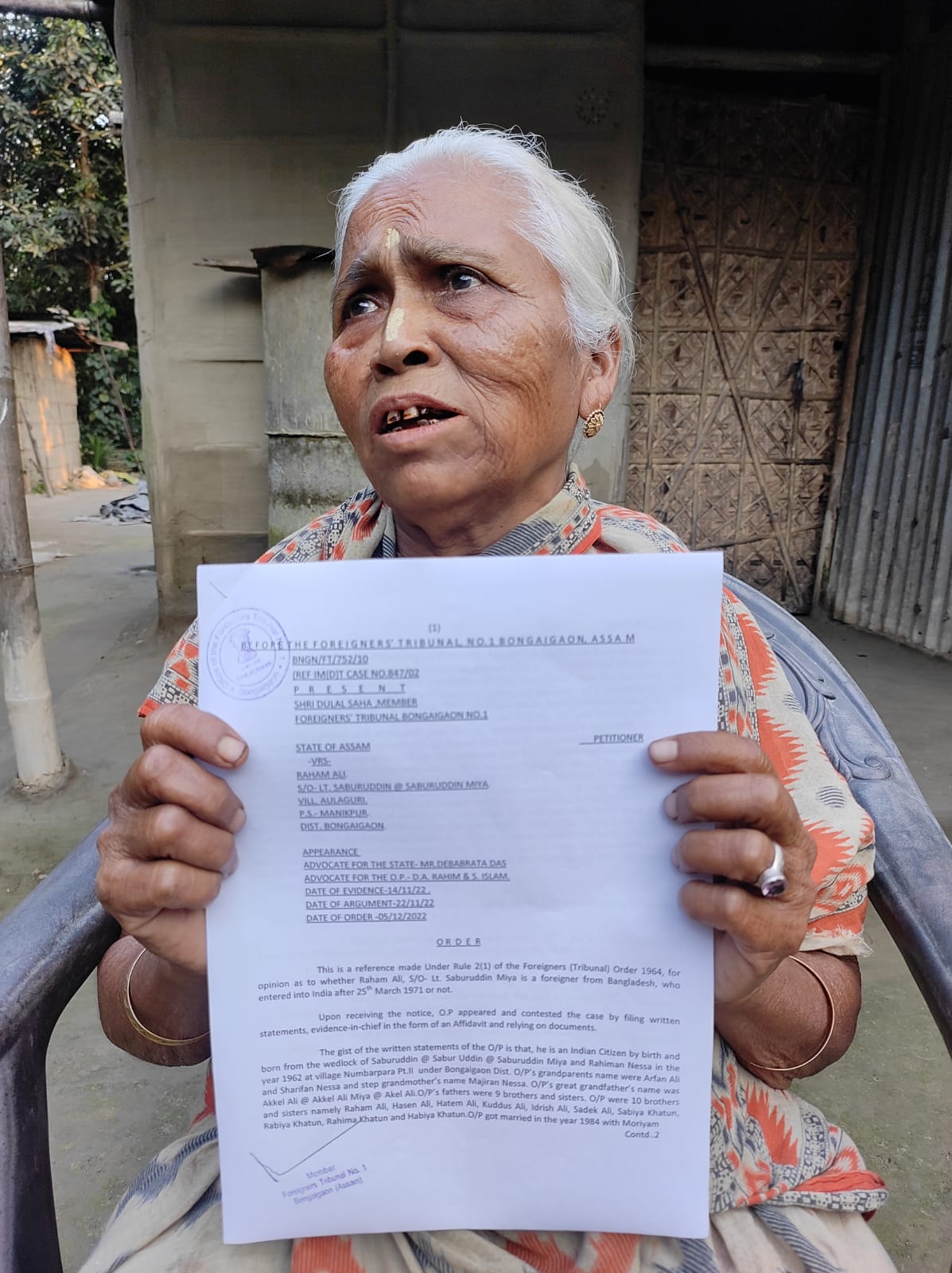 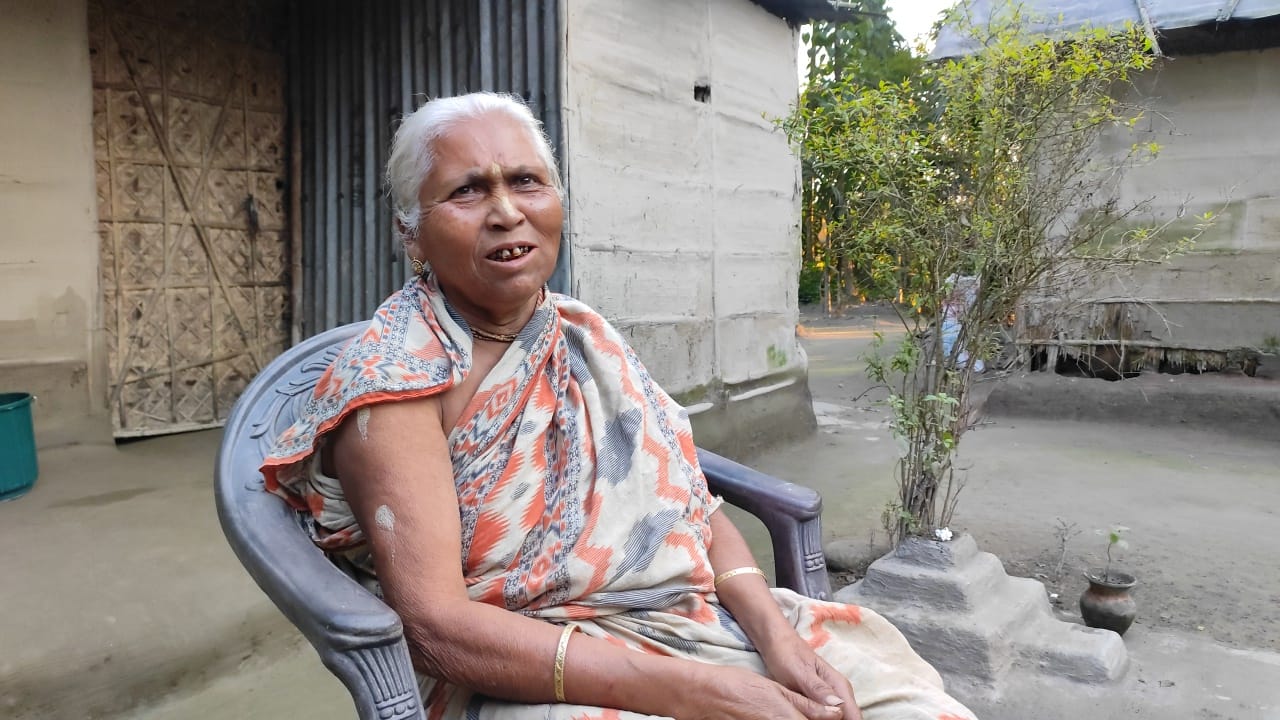 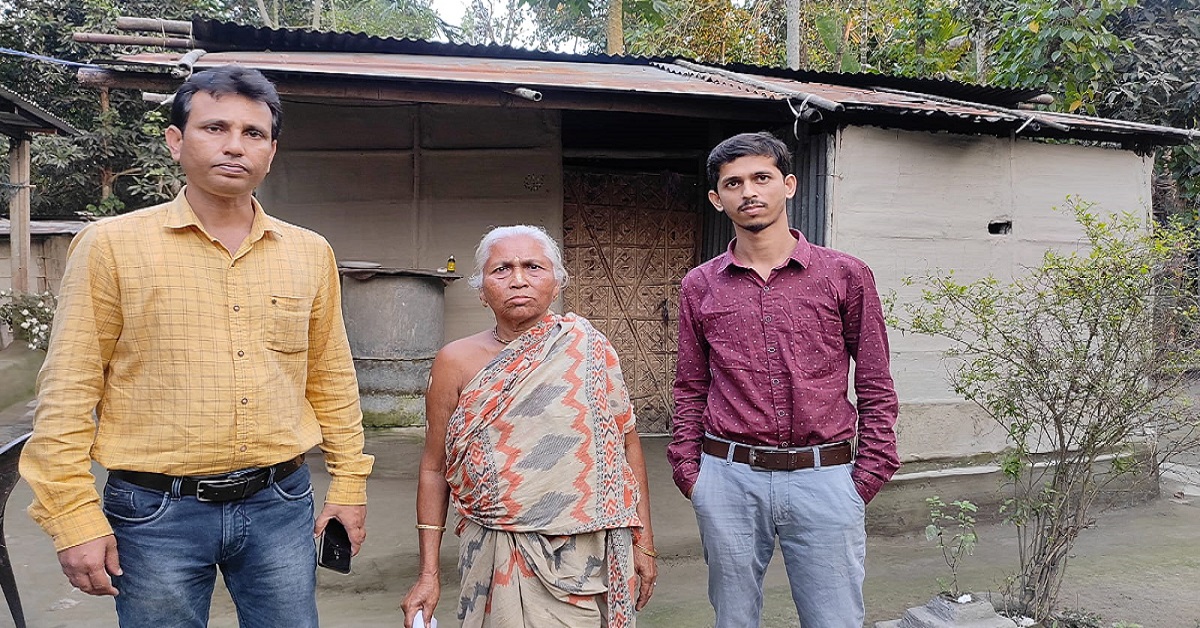 It is at this crisis point that the CJP team stepped forward to lighten her burden and fight for her rights. Her written statement before the tribunal declared, with evidence and documents that she is a Indian by birth and her parents are also citizens of this country. She has submitted the voter list of 1966 where her father’s name Adhar Baishya was clearly recorded. She also produced the ration card with the family details of Adhar Baishya. In its findings, the tribunal commented that the 1966 voter established the existence of Usha Baishya’s father Adhar Baishya. The Tribunal Member also thoroughly examined the Inspector of Food, Civils Supplies & Consumer Affairs to the test, and establish, the authenticity of the ration card. The Tribunal found the claims of Usha Baishya to be correct.

Advocate Dewan Abdur Rahman, part of CJP’s legal team, who argued the case for Usha Baishya said, “It was a challenge case. Her father was a voter in 1966, she was married in 1970 but they did not have proper documents to place before the tribunal. Later, through dint of CJP team’s hard work, a linkage was found in the government-issued ration card where Usha Baishya shown as a daughter of Adhar Baishya.”

She was overcome with happiness when advocate  Dewan Abdur Rahim and Nanda Ghosh, CJP’s team in charge in Assam, handed over the copy of the judgement to her on December 18. She insisted on serving the team simple refreshments, all the while speaking exuberantly, “I am in my last days, I don’t know whether we will meet again or not. So drink some tea or milk.” While offering these refreshments, she was praying, “I pray to my Gopal(God Gopal) that he grants you a successful future, that your organisation grows and helps many others too!”

Usha’s  judgement  has already been done but due to her illness, she was at a relative’s house for treatment.

There are hundreds of thousands of such affected persons in Assam. Like Jamila and Usha, they are being subject to day to day trauma and torture in Assam, all in the name of citizenship! We are Team CJP are doing our best to strengthen the struggle of the most marginalised; be it those detained in detention camps; those just released, those sent notices by Foreigner Tribunals, those declared ‘D’ Voters. Our team feels deep satisfaction when, case by case, the day to day troubles of these hapless persons are lifted, they are declared Indian citizens; bringing a smile to their faces and allowing them peaceful and long nights of sleep.