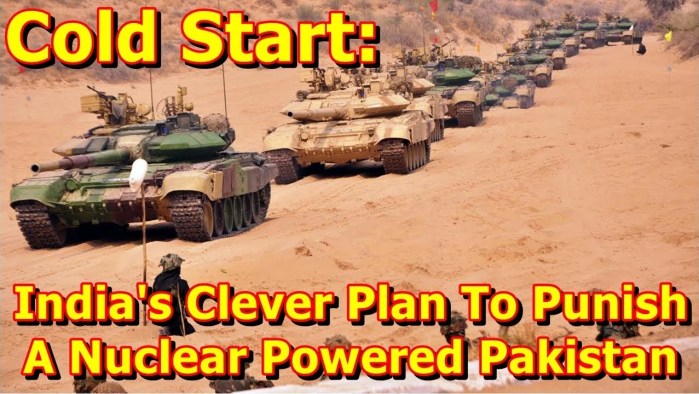 The most used and discussed term in the context of India’s Cold Start Doctrine (CSD) is Tactical Nuclear Weapons, specifically regarding “counter” to the CSD. In a nutshell, the Pakistanis love it while the Indians hate it. They both have their reasons.

A country that topped off its usual US $40 billion defense budget to the whopping US $55 billion with possibilities of adding the further US $100 billion in the future would not like to see a Tactical Nuclear Weapon shatter its master plan. CSD for conventional military operations was designed as a maneuvering tactic to hit and run without giving the adversary a reason enough to respond with a nuclear attack. Now with the development of battlefield nuclear weapons or TNW’s the nuclear threshold has been brought down by Pakistan. The development means that even a short and quick attack can be countered by a nuclear weapon without indulging in a full-fledged nuclear warfare. This to some extent shatters the credibility of CSD.

There are always different ways to look at a situation. Some argue that the development of short-range ballistic missiles upsets the stability of the region. The counter-argument for this is that the TNW’s do not upset the strategic stability of the region rather it restores deterrence prospects for Pakistan which were somehow challenged by the development of CSD. Deterrence is the best shot we have at regional strategic stability. Due to the developments of CSD or as the Indians like to call it a proactive doctrine, the stability has been threatened since Pakistan has felt vulnerable to an attack or limited warfare. It is the right of every state to take suitable steps for their national security, and NASR is doing just that. As stated by General (Retired) Mahmud Ali Durrani, “deterrence of all forms of external aggression through an effective combination of conventional and strategic forces.” This clarifies the fact that the adversary may make a conventional attack, but the response from Pakistan’s side may come in any form, conventional or nuclear. The TNW’s have been declared the country’s extension of its conventional deterrent capabilities. It would be safe to say that these weapons are designed to facilitate the conventional weapons in a limited war. There are three levels of the broad deterrence of Pakistan as described by Air Commodore Adil Sultan. These are tactical, operational and strategic level. Tactical Nuclear Weapons deal with limited intrusions. Operational level deals with a military offensive of considerable size whereas at the strategic level an all-out war is handled.

The development of Tactical Nuclear Weapons leads to two important aspects: the shift by Pakistan to a full spectrum deterrence and the lowering of the nuclear threshold. Both are in direct response to the Cold Start Doctrine, and both can have devastating impacts on the proactive military doctrine of India. As opposed to the popular narrative of Full Spectrum Deterrence (FSD) being a full out blow to the strategic stability, it is merely a way to stabilize the expansionist adversary from any provocative ambitions. As for the lowering of the nuclear threshold, it is purely for defensive purposes. The development of TNW’s equips Pakistan for a defensive attack rather than an offensive one.
Coming towards the second part of the question, how effective is the CSD after the development of tactical nuclear weapons? The whole idea of the Cold Start Doctrine was to make use of the loophole in Pakistan’s deterrence policies and indulge in limited warfare without pressing Pakistan’s nuclear buttons. In this aspect tactical nuclear weapons have minimized the threat of this doctrine. The surprise element, the maneuvering tactic and the idea of poking the adversary but not giving it enough reason to poke back in an even bigger style has been negated. India’s previous military doctrine, Sunderji Doctrine, included the strike corps. The Cold Start Doctrine, on the other hand, has evolved the strike corps into integrated battle groups (IBG). The amounts of tanks provided to IBG’s is less than those provided to the strike corps. Now, it will take only 37, 15kt weapons or 57, 8kt weapons to destroy the Indian IBG. This right here is exactly the reason why Indians have been so actively opposing the Tactical Nuclear Weapons on every international forum. Ever since 2004 India has carved out this military doctrine and put all their faith into it. Now with 37, TNW’s the great strategy can be reduced to ashes.

From Pakistan’s perspective, tactical nuclear weapons are a major achievement. They are the final strand in the completion of deterrence and also an effective defense mechanism. It might not have been Pakistan’s first choice since the country is well aware of the cost of war and the damages it incurs, however, the expansionist plans coming from the other side of the border have justifiably forced Pakistan into resorting to such purely defensive measure.