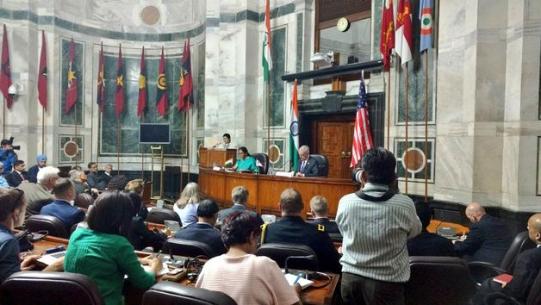 On 26th September, India said that it wouldn’t send its troops to Afghanistan. There would be no Indian boots on the ground, Defence Minister Nirmala Sitharaman stated, while addressing a joint press conference with U.S defense Secretary James Mattis in New-Delhi. (1)

In a speech on 21st August, U.S President, Donald Trump announced his new Afghanistan strategy; “We have been paying Pakistan billions and billions of Dollars at the same time, they are housing the very terrorists that we are fighting, but that will have to change, and that will change immediately” (8)
Trump wants India to do more in Afghanistan. (1)

China formally opened its first overseas military base in Djibouti. The event was timed to coincide with the celebration of the 90th anniversary of the establishment of China’s military, the People’s Liberation Army on August 1. (3)

Djibouti is a tiny nation in Africa sandwiched between Ethiopia, Eritrea, and Somalia. It is at the Southern entrance to the Red Sea on the route to the Suez Canal. (3)
China’s agreement with Djibouti ensures its military presence until 2026 with a contingent of up to 10,000 soldiers. (3)

The possibility of another Doklam like stand-off with China in the very near future cannot be ignored; furthermore, Pakistan is always trying to cause unrest in India.
Therefore, Indian Army needs to be combat ready and experience various terrains to maintain its sharpness as well as fighting edge.

Taliban has increased its footprint by about 15 percent in Afghanistan since 2015. The Afghan government of Ashraf Ghani controls approximately 60 percent of the country’s territory. (9)
The Afghan National Security Force (ANSF) neither has the military equipment nor adequate training to function as an effective counter-insurgency force. Despite, an estimated $780 Billion spent by U.S over 15 years, the Afghan army remains under-equipped and poorly trained. (9)

Daniel Davis, a former Lieutenant-Colonel in the U.S Army, who served in Afghanistan stated that even with more than 100,000 U.S troops in Afghanistan during the peak of American forces presence in the country, there were massive swaths of Afghanistan, which constituted no-go territories for U.S as well as Afghan forces. (9)

Davis added that as long as Pakistan refused to stop the Taliban from using Pakistani territory as a haven, U.S will never succeed in Afghanistan. (9)

In February, General John Nicholson stated that the Taliban and the Haqqani Network were the greatest threats to security in Afghanistan. Their senior leaders enjoy freedom and safety in Pakistan. (9)

During March General Joseph Votel said in his statement before the Senate Armed Services Committee that out of 20 U.S designated terrorist organizations operating in the Afghanistan-Pakistan sub-region; seven are based in Pakistan. (9)

Pakistan is punishing Afghanistan for being India’s friend and for its policies towards India. (9)

This is an excellent chance for India. Indian Prime Minister, Modi must commit massive numbers of Indian troops to Afghanistan, in return India should ask U.S to cut all military along with financial aid to Pakistan thereby declaring Pakistan, a state sponsor of terrorism, for its support of terrorism in Afghanistan as well as the Indian province of Jammu & Kashmir.
Indian troops can fill in the void left by the U.S. troops. Americans would be more than happy to withdraw from Afghanistan and ‘out-source’ the security aspect as well as infrastructure building of Afghanistan to the Indian army.

This will result in a ‘win-win situation’ for everyone involved.

It would be easier for the Indian army to stabilize Afghanistan since a majority of Afghans view India quite favorably compared to the U.S.
Indian army will gain valuable experience through its long-term involvement in Afghanistan. A large number of Indian youngsters may be drafted into the army to make up for the numbers of Indian troops to be stationed in Afghanistan.

Indians professionals can also be employed in big numbers for the herculean task of rebuilding Afghanistan and turning it into a safe, peaceful nation.
The measures above will go a long way in resolving one of the biggest headaches of ‘job-creation’ for the Modi government. (7)
Trump could boost his domestic as well as international popularity immensely by withdrawing U.S forces from Afghanistan. The vast amount of money which U.S provides in the so-called ‘war on terror’ to Pakistan would be saved from going ‘down the drain.’

A fraction of these U.S. funds will be sufficient for the Indian army to do a much effective job of stabilizing Afghanistan.
Finally, it would expose the hypocrisy of the Pakistani establishment of ‘running with the hare and hunting with the hounds’ regarding their pretentious façade of fighting terrorism while harboring all shades of terrorists through active state connivance. (6)

Modi must make a paradigm shift in India’s foreign policy and dispatch Indian Army to Afghanistan. This will constitute the biggest diplomatic victory for India and herald the country’s arrival on the world stage while completely isolating and exposing Pakistan in front of U.S and the NATO alliance.