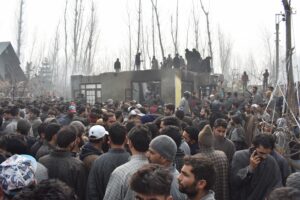 What else can be said about the suffering faced by Kashmiris, facing bullets from several sides? Kashmir issue, unfortunately, falls in the bracket of those sensitive as well as controversial issues over which communal frenzy can be aroused among sections in other parts of India. Muslims represent the majority of the population in Jammu & Kashmir. There still prevails the trend to easily tag Pakistan-label with Indian Muslims, which is more enhanced about Kashmiri Muslims. Fake “news” being circulated gives importance to Kashmiri Muslims’ soft approach towards Pakistan. Sadly, a rudimentary survey indicates that quite a number of Indians take such “news” fairly seriously.

Kashmir is clearly viewed as one of those political cards which right-winged, extremist parties can bank upon to whip up communal frenzy particularly when the going seems fairly dismal in other areas. Recent developments, Covid-impact, farmers’ protest, and the Lakhimpur-Kheri case among several others have not helped the party heading the central and Uttar Pradesh governments gain a favorable image at various levels. Notwithstanding all the noise made about Indian media acting as pawns and puppets of ruling politicians, coverage earned by rival parties on these issues has probably proved fairly taxing for the former. Added to this is the failure of this party to forge ahead in West Bengal assembly polls.

So, communal strategy is apparently being tried once again on the Kashmir front. Clearly, the trend to easily label Indian Kashmiri-Muslims as militants cannot be sidelined. Though secular Indians’ have generally not taken long to raise their voice against communal atrocities committed against minorities in other parts of the country, a rather subdued approach is visible regarding bias exercised against Kashmiris in general (Muslims and Pandits). Surprisingly, hardly any action is visible from Muslim organizations and groups from the rest of the country.

The preceding attitude is apparently based on caution and perhaps fear linked with the Pakistan tag associated with Kashmiri Muslims. Little importance is given to deliberating upon its actual prevalence and questioning the same. The bitter truth that Kashmiri Muslims in India have been as hard hit by militants as non-Muslims needs to be seriously pondered over. The decision of a few Muslims to take to “militancy” does not imply that each Kashmiri and/or Muslim in other parts of the country, as well as the world, should be viewed as a terrorist. In fact, it is erroneous to link any person with terrorism simply on account of religion or the group he/she pursues. Describing the entire Hindu, Sikh, or any other religious community as terrorists/communal activists only if certain members of these groups engage in such activities is as erroneous as is the trend to generally hold a biased approach along this line towards Muslims.

In addition, why should any criminal be believed for what he/she claims, including the attempt made to justify his/her criminal activity in the name of religion? Besides, it is indeed ironic that the so-called militants are described as militants and also shot down in “encounters” even prior to their being judicially viewed as militants. Of course, the country’s defense and security demand forces to be extra-alert and also active regarding possible as well as actual threats from militancy. So, it may not be appropriate to deliberate on such moves.

Indian Kashmiris may not have been subject to bullets from militants as well as forces in “encounters” if there did not prevail diplomatic controversy over the global status of their geographical terrain. It is fairly pathetic that diplomatic lapses and/or deliberate moves of certain involved parties lead to the suffering of people who are hardly a party to these. At times, their sufferings lead to deliberation on whether they are being used as pawns for no fault of theirs.

The preceding point may be viewed from another angle, with reference to Indian Kashmiri Muslims. Over the decades, an increasing number of Kashmiri Muslims have given the Indian civil services examinations. Quite a few coaching centers are being run by successful Muslims to promote other Kashmiri Muslims in this venture. There are also reports of their moving to other parts of India for higher education, jobs and also promote their business. These are just a few indicators. Statistically, there are no reports of Kashmiri Muslims choosing to cross the border for similar purposes. Yes, reports of a minor percentage being influenced by terrorism and taking to militancy cannot be ignored. However, the infiltration of militants from across the border cannot be ignored. From what angle are Indian Kashmiri Muslims to be blamed for an increase in militancy in the state?

Little importance is given to young Indian Kashmiri Muslims’ achievements as Indian representatives in the field of sports, their success in administrative examinations, and other areas. And barely any to sufferings they face.

Against this backdrop, when Kashmir militancy hits headlines, it is imperative to deliberate upon the issue a little more elaborately than go by only what is propagated. At times, just as what is advertised doesn’t project the genuine picture, “news” of controversial issues also may be incomplete, partial, and/or biased. It is possible, loss of rhetoric to silence farmers’ protest, subdue anger over the Lakhimpur-Kheri case, failure to check economic woes, as well as the negative impact of the Covid-phase, have served as strong political reasons to try and turn attention to Kashmir-front. Ayodhya-card can no longer be politically cashed on as effectively as it used to be earlier. But, as recent developments indicate, certain right-winged politicians are still hopeful of making electoral use of controversial Kashmir-card tagged with an anti-Pak label. The close linkage of the timing of key elections in India and militancy in this area stands out a little too markedly to be ignored. Sadly, little concern prevails about Kashmiris being used as pawns in the process. The same may be said about humanitarian and democratic ethics being simply ignored!