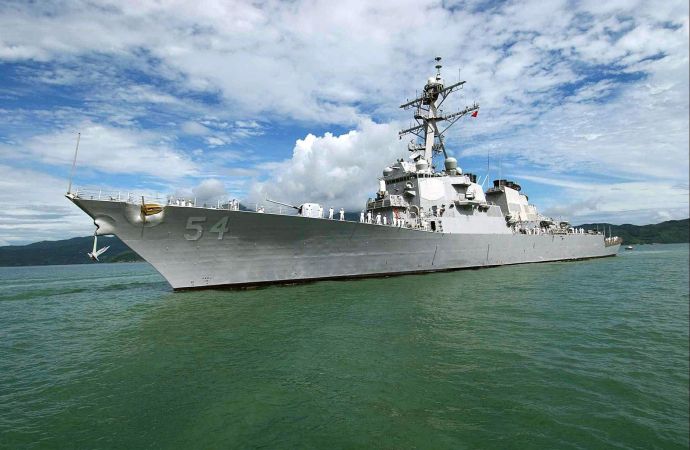 On January 30, USS Curtis Wilbur, a US missile destroyer, went tantalisingly close (12 nautical miles) to Triton Island (which is a part of the disputed Paracel Islands) without any prior information to the countries in dispute. This is on the back of a similar move by the US in the South China Sea (SCS) in October last year. These moves by the US have not deterred China from building sovereign archipelagic structures in the SCS or issuing warnings to foreign vessels even in routine patrols asserting “freedom of navigation” in maritime areas claimed by it. A recent study has claimed that the SCS will become a de facto Chinese lake by the year 2030. Since early 2010, the Chinese regional maritime assertion has sought to destabilise Washington’s intended rebalance strategy in the region. One of the main reasons in US’ inability to formulate a consistent regional rebalance strategy to the Asia-Pacific is the evolutionary strength and its non-static nature of Chinese regional power projection. For Washington, this has been further compounded by a set of assumptions about Chinese behaviour upon which Washington continues to base its Asia-Pacific strategy. These assumptions broadly lie on the foundational belief that under present circumstances the possibility of the two countries going to war is almost negligible. However, China has stood to benefit vastly from that understanding of great power relations in the Asia-Pacific. To add to Washington’s predicament, a recent Congressionally mandated study has pointed out that a “consistent confusion about the rebalance strategy and concern about its implementation” persists in Washington.

The developments certainly do not augur well for US’ anticipated role in the Asia-Pacific region for the coming times. Despite growing Chinese bearing in the region, Washington’s response to unexpected recent developments in the South China Sea (SCS) has not exceeded posturing. But regional strategic and political trends tellingly suggest that the US might be subtly evolving a new strategy to deal with the Chinese challenge in the region. This developing strategy, if not already, could be towards galvanising a multilateral approach led by the US and involving three key regional players besides some other small countries; India, Japan and Australia. Much of the US’ future strategy and maritime cooperation is likely to be played out in the Indo-Pacific, a region that these concert of democracies want to be pitted demonstrably against the SCS vis-à-vis international maritime laws and freedom of navigation.

Even as strategic complications grow for the US in Asia-Pacific region with new trends in Chinese power projection in the South China Sea, the US could well be the process of shifting its Asian pivot westwards, in the Indo-Pacific. The move is likely to benefit the US in two clear ways: first, refurbish its Asian alliance by finding new partners in South East Asia and South Asia, and second, provide extra manoeuvring space for itself and its partners by creating a maritime buffer zone between the unruly South China Sea (SCS) and the Indo-Pacific as a modular UNCLOS abiding maritime region commanding greater regional democratic consensus between stakeholders. The maritime buffer zone between the SCS and the Indo-Pacific would also mitigate the Chinese opposition by diluting the locus standi in Beijing’s narrative of maritime threat perception emanating from US maritime collaboration in the Asia-Pacific. Recent developments in the maritime region of the Indo-Pacific have exhibited the potential for a security quartet between the US, Japan, Australia and India. Overtime, the growing legitimisation of the Indo-Pacific would also devitalise Beijing’s opposition to the four countries coming together in maritime cooperation. The unheedingly perfunctory approach by these countries to Beijing’s apprehensions over recent inclusion of Japan as a permanent member in the Indo-US Malabar Exercises and Australia’s participation in the first AUSINDEX-15 are trends in that direction.

As the Indo-Pacific sits at the heart of Beijing’s much sought Maritime Silk Route, it portends the region’s immense future significance. That certainly seems to be the consideration in Washington’s growing emphasis on the region, most importantly through its Indo-Pacific Maritime Corridor and the Lower Mekong Initiative. These initiatives also find consonance with Washington’s growing outreach to New Delhi and the latter’s reciprocity in willing to don the role of a regional “net security provider” in the region extending from western Pacific to parts of the Indian Ocean. The US has emphasised that the Indo-Pacific will shape future of trade and connectivity in the region through the Indo-Pacific Economic Corridor, combining its efforts in the region with that of other regional organisations such as the ASEAN and the East Asia Summit (EAS).

The Indo-Pacific has given countries such as Japan, India and Australia the necessary strategic space to collaborate with the US without a direct confrontation with China. The allegiances of US’ non-NATO allies which somewhat stands tested in the Asia-Pacific region would get the desired strategic flexibility in the Indo-Pacific. This is particularly true of Australia which has off late pendulated between traditional loyalty to Washington and its growing dependence on Beijing. The Indo-Pacific also lessens confrontational categorization of US and its allies pitted against China by allowing for the possibility of a “strategic triangle” in the region between the US, China and India. Most assessments regarding the triangular possibility of cooperation between these three nations are accorded to the Indo-Pacific, only few for the Indian Ocean and almost none for the Asia-Pacific.

In such geostrategic circumstances, Washington seems to be in the process of moving its Asian pivot to the Indo-Pacific, making it easier for itself to simultaneously use the best geostrategic advantages of two very significant maritime domains of Asia; the Asian Pacific and the Indian Ocean.