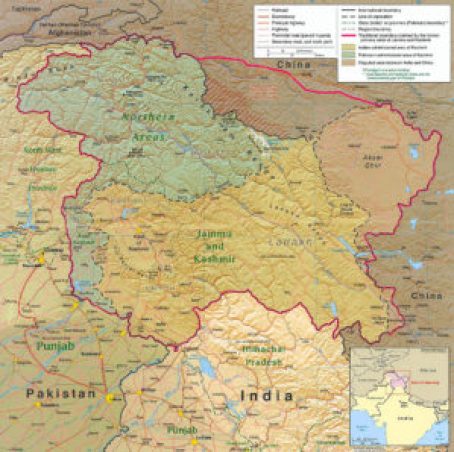 India and Pakistan have been in conflicting and aggressive relations since the 1947 partition. The both nuclear-armed neighboring countries also being the two dominant key players of the politically unstable & unbalanced South Asian region are still lingering from their long pending differences and other unsolved bilateral issues. Without denying the facts that there were several attempts’s happened in the history between the two countries that were too enough to gear – up better India – Pakistan relations, like the historic Agra Summit which took place in July 2001, between the then President Parvez Mushraff and former Prime Minister Atal Bihari Vajpayee at Agra. In this two day summit, various issues were highlighted and discussed between the two countries which include the prolonged Kashmir issue, cross-border terrorism, nuclear reduction, release of prisoners of war but at the end, it failed to bring both on common ground. However, this failed summit followed the Islamabad declaration in 2004 ( 12th SAARC Summit), in which top leaders of both the countries highly welcomed the steps towards normalization and agreed for the common objective of peace and prosperity, development and the overall progress of the South Asian region. One could argue that the main purpose and the fundamental principle of these talks between the two countries was to look forward to a prosperous and progressive future and to develop a good & friendly relations with each other but as usual, we are known how one little incident would derail the relations of both countries for a long. It was deadly 2008 Mumbai terror attack that blows – down all the relations between the two countries as India blamed Pakistan sponsored militants carrying out this terror strike. It was after this deadly terror strike India followed the “strategic restraint” policy vis-à-vis Pakistan which from time to time fuelled more and more hostilities and confrontations between the two nuclear-armed countries; Uri base camp attack, Pathankot attack have added more hostilities. Does it mean that the two nuclear-armed neighboring countries are unable to create peacefully and the silent borders? Does it mean that the conflict-torn people of Kashmir will never see a day without bloodshed? Will Peace remain elusive for another century in the region? Doubtlessly, while keeping in view the prevailing political instability and political depict between India and Pakistan, these questions aren’t easy to be answered.

Since the British – India partition almost 70 years have been passed, and in these years the two neighboring countries had fought many wars which brought incalculable troubles, miseries and have claimed tens and thousands of human lives across the warmongering borders, especially in the Kashmir region. Moreover, the relations between the two remain strained, aggressive, volatile and hot as the daily border civilian and security casualties on both sides are continuously adding more fuel to the fire. Thus, One can say that due to the wrong and aggressive attitude of both the countries, the sealed borders remain bloody, bullets and motor shells continue to fly over Himalayan mountains, back-channel process initiatives, people to people contact and the trade relations between the two countries remains discorded and disturbed.

I and many others, being the citizens of South Asia firmly believe that war is not an option nor a tact for a permanent solution that will bring stability in India – Pakistan relations or a way out for a long pending Kashmir issue. Let me tell, if the wars were meant for peace, development, and prosperity, then those wars which were fought between India and Pakistan would have done much more. But as we know wars only create more violence, aggression, and hostilities between the conflicted parties instead of reconciliation, conflict resolution and a peaceful negotiation. The main purpose of the war is to halt and erase the much-needed peace processes and peaceful negotiations, more or less the immediate & outcome of the war is negative and deconstruction. As someone truly said, ” A Peace for a war not a war for peace”. Let both the countries follow this quote with letter & spirit.

Since decades there is a common perception that the longtime undecided Kashmir conflict is the main bone of contentions between India and Pakistan. Undoubtedly, time & again festering and boiling Kashmir issue has muddled and derailed the roads to prosperity, economic development, diplomatic ties and peaceful negotiations of India and Pakistan. On the one hand Kashmir is to both India & Pakistan a drain of resources, but on the other hand, it is also a bone of contentions & coercions between the two. It is important to note here, that it is because of the undecided Kashmir issue both India and Pakistan are spending millions rather trillions of dollars only for their defense and security purposes because there are deep political distrust and mutual suspicions between the two countries.

However, to bring peace and normalcy internally and externally there is much need to solve this long pending Kashmir dispute with the involvement of principal stakeholders of the issue. Because without the involvement of actual stakeholders there is no better scope of hope and peace between India and Pakistan, and so-called the normalcy in Kashmir which in the true sense is burning every single day with the blood of innocents, no matter whose gun it is.

On the one hand, Pakistan claimed Kashmir a disputed land and considered it as one of its main issues rather declared so-called its “Integral Part or Jugular Vein” Simultaneously, India, on the other hand, remain politically arrogant and repeatedly denying Kashmir as an undecided offshoot of 1947 partition. History bears witness, Kashmir is neither the Jugular vein of Pakistan, nor it is an integral part of India.

However, to build peace and confidence building measures between India and Pakistan & give a dignified life to people of Kashmir, then there is much need of sincere and constructive political dialogue; both the neighboring countries must understand that nothing can be settled in the battleground or through wars but a lesson that the two must have learnt that after fighting so many wars with each other nothing has been settled rather more and more hostilities and aggressiveness was born between the two that only brought troublesome days & nights and leave a woeful and pathetic tales to tell.

So, sooner than later there is need to start many rounds of talks between the top of the ministries of the two countries, allow people to people contact and more importantly the exchange of bilateral sports between the two should take – off because in past we have seen and witnessed that how the bilateral sports between India and Pakistan have largely reduced barriers and blockades and sowed the seeds of love and affection between the people of two countries. Moreover, there is need to stop this offensive and aggressive military and security doctrines from both sides of the borders for the greater purpose of peace and stability in the Sub – Continent, especially in the troublesome and yelling Kashmir region. There is need to shun limited war policies, cold start doctrines, border infiltrations, surgical strikes and ‘tit for tat’ policies at diplomatic levels during the regional and International summits across the world.

In short, before it gets too late, the sane leaders which I believe are present in both the capitals, New Delhi and Islamabad must acknowledge the prevailing political crisis, large difference between the two countries and the discorded diplomatic ties including the festering Kashmir issue which with each passing day is getting bad to worse is not a good sign to both neighboring countries. Frankly speaking, the majority acceptable resolution of Kashmir issue would be beneficial to people of Kashmir in particular and India & Pakistan in general.