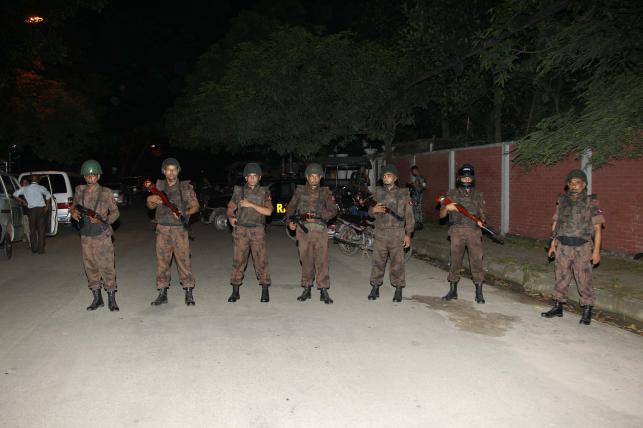 On July 1, Islamic State-backed militants opened fire in the Holey Artisan Bakery in Dhaka, Bangladesh. After a standoff that lasted almost 12 hours, the six gunmen and 22 hostages were dead.

This isn’t the first time Bangladesh has suffered from religiously motivated slayings. Since the start of 2015, militants have killed six secular bloggers and publishers in Dhaka and Sylhet. Islamic extremists have also carried out violent attacks against religious minority communities. Hours before the Dhaka attack, a Hindu priest was killed in Bangladesh’s southwestern district of Jhenaidah.

First, some background on Bangladeshi politics

Since Bangladesh won its independence from Pakistan in 1971 through a bloody civil war, the pro-independence Awami League Party, led by Sheikh Hasina, has clashed with the pro-Pakistan Jamaat e-Islami movement. The Awami League has maintained power in Bangladesh since 2009 by creating a broad-based coalition of Bangladeshi nationalists, moderate Islamists and secularists. To keep its diverse support base intact, the Awami League has combined quasi-democratic elections with pervasive political repression.

Jamaat e-Islami followers can be divided into two wings: political Islamists and Islamic extremists. Political Islamists seek to transform Bangladesh from a secular to an Islamic state governed by sharia law. Islamic extremists within the Jamaat e-Islami seek to eradicate all un-Islamic elements from Bangladeshi society and have cooperated with international terrorist organizations for decades.

Many Bangladeshi Islamic extremists fought for the mujahideen in Afghanistan during the 1979-1988 war with the Soviet Union. In 1998, a senior Jamaat e-Islami leader in Bangladesh, Bulbuli Huzur, openly praised the Taliban’s takeover of Afghanistan and forged a personal relationship with Osama bin Laden. This radical Jamaat e-Islami faction has stayed politically relevant even after the Taliban’s fall. Many Bangladeshi intelligence experts believe this faction helps al-Qaeda in the Indian Subcontinent (AQIS) carry out religious murders in Bangladesh.

This year’s religious violence can be attributed to three Bangladeshi government actions that strengthen the Awami League’s position relative to its Islamist rivals and push marginalized Islamists toward extremism.

1. The Bangladeshi government denies the threat posed by ISIS and al-Qaeda

Despite compelling evidence of a growing al-Qaeda and Islamic State presence, Bangladeshi authorities consistently deny that these organizations are instigating religious violence within Bangladesh. Instead, the governing Awami League has blamed religious murders on its principal opponent, the Bangladesh National Party (BNP), and the Jamaat-e-Islami.

The Awami League has made more accusations against opposition factions since the Dhaka attack. In fact, Bangladeshi national police chief Shahidul Hoque declared that the Islamic State wasn’t involved in the most recent attack. Rather, he insisted, the Jamaeytul Mujahideen Bangladesh (JMB) ordered and carried out the attack.

Why would Bangladesh refuse to acknowledge and confront al-Qaeda and the Islamic State? Here are two likely reasons.

First, Bangladesh wants to ensure foreign investment flows continue, because foreign capital is vital for the country’s economic development. Admitting the presence of jihadist networks could prompt foreign companies to withdraw their capital.

Second, the Awami League is trying to hold onto power by blaming domestic opposition parties for the increasing violence. It hopes that doing so makes the public distrust and fear Bangladeshi Islamists.

The Awami League also uses this violence as an excuse for mass arrests. In June 2016, Bangladeshi police arrested 14,000 suspected Islamic extremists to “prevent the destabilization of Bangladesh.” Even though the Bangladeshi government stated that the JMB was responsible for growing religious violence, 2,100 leaders and activists from the opposition BNP were arrested. This demonstrates the politicized nature of mass arrests.

As the Bangladeshi security forces’ arrests were arbitrary, they did little to curb religious violence. Nevertheless, the United States and India reward these “counterterrorism efforts” with financial support and direct military cooperation. And that international support further marginalizes the opposition.

But in fact, it does little or nothing to discourage terrorism. Al-Qaeda and Islamic State collaborators are rarely arrested. If they are, they frequently bribe security officials for early release. This means that Bangladeshi jihadists can continue to carry out acts of terrorism with impunity.

2. Bangladesh is executing war criminals from the losing side of the 1971 war for independence. That’s antagonized Islamists.

In 2009, the Bangladeshi government created the International Crimes Tribunal (ICT). The ICT is charged with prosecuting and punishing Bangladeshis who helped Pakistan commit war crimes during the 1971 Bangladesh War of Independence.

The ICT has indicted, prosecuted, convicted and executed a number of opposition BNP and Jamaat-e-Islami supporters. But many Jamaat e-Islami supporters see the ICT as an illegitimate tool of the Awami League’s nationalist repression. And that point of view is becoming more popular.

According to a 2013 AC Nielsen poll, 86 percent of Bangladeshis support the prosecution of the country’s 1971 war criminals. At the same time, two-thirds of Bangladeshis disapprove of how the ICT is handling the trials. Human rights violations, like the silencing of defense witnesses by the police and the harassment of defense lawyers, have undercut public confidence that the trials are fair.

Meanwhile, the ICT trials have convinced many Islamists that the Awami League government is persecuting them. These sentiments encourage radicalization and can help explain the rise in religious violence in Bangladesh. In fact, in February 2013, there were protests against the ICT trials. During these demonstrations, Jamaat e-Islami supporters openly called for the Awami League government’s fall and the expulsion of non-Muslims from Bangladesh.

Islamic extremist organizations like al-Qaeda and the Islamic State, have capitalized on these attitudes. Al-Qaeda has been especially successful in recruiting radical Jamaat e-Islami members who want retribution for the Bangladeshi government’s executions of their senior leadership figures.

In addition to bringing in Jamaat e-Islami elites, Islamic extremist organizations have rallied supporters against the “pro-India” Awami League and “pro-Pakistan” BNP. This appeal to Bangladeshi nationalism has incited Islamic extremists to perpetrate violence against non-Muslims and secularists who support these “unpatriotic” parties.

3. Islamic extremism could be a reaction to fears that the government might become increasingly secular.

In 2010, the Bangladesh Supreme Court restored secularism as a basic tenet of the constitution, more than three decades after constitutional amendments made Islam the country’s official religion.

Since that decision, secular civil society leaders and young Bangladeshis have pushed to remove Islam as Bangladesh’s official religion, a petition that was denied in March 2016.

The Bangladeshi Supreme Court’s reinstatement of secularism fueled an Islamist backlash. Islamic extremists have carried out extrajudicial killings that accord with a very strict interpretation of sharia law. For instance, in 2011, on a local imam’s orders, Hena Akhter, a 14-year-old girl in Shariaptur, was lashed to death for allegedly having an “affair” with a married man.

In April 2016, two gay rights activists were murdered on al-Qaeda’s orders for promoting homosexuality in Bangladesh with U.S. and Indian support.

The government is trying to find a middle ground. But it’s risky.

But that passivity has also fostered the belief that religious murders will go unpunished — which makes Bangladesh more vulnerable to Dhaka-style terrorist attacks.

The Dhaka attack has heaped international pressure on Bangladesh to curb growing Islamic extremist violence. But Hasina faces a difficult challenge if she wants to combat terrorism without fragmenting the Awami League’s political coalition.

[This article was first published on 21 July 2016 in The Monkey Cage at The Washington Post as “Here’s how the Bangladesh government is making religious violence more likely“. Reprinted here with permission.]