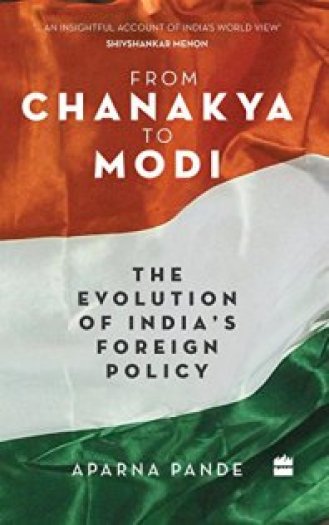 Aparna Pande’s “From Chanakya to Modi” leads one to a deeper understanding of Indian foreign policy with civilizational roots, traversing through two imperial administrations of foreign origin. Both Mughal and British rulers were a continuous phenomenon for an extended period that left a significant imprint in India’s present outlook. A coherent foreign policy cannot prevail in a vacuum and in the case of India; the foreign policy paradigm is as deeply ingrained by its civilizational heritage as it is by modern ideas about national interest. India’s engagement in the world from Chanakya in the third-century BCE to Modi in 2017 entails autonomy and independence in decision making. Seeking modernity in the contemporary world, a study of India in the context of its history and tradition is important.

In the year 340 BC, a Brahmin youth sets out to avenge a cool, calculated and cruel murder of his beloved father. In the process, he becomes the most powerful political strategist, succeeds in uniting a broken country against the invasion of almost mythical Alexander the great. Pitting one force against the other, he pulls off a wicked and astonishing victory and succeeds in installing Chandragupta Maurya on the throne of the mighty Mauryan Empire. The principal strategist Chanakya or Kautilya, also known as Indian Machiavelli then recedes into the shadows to write Arthashastra, the science of wealth. His treatise covers statecraft and management of kingdoms. The Arthashastrians were akin to Machiavelli’s “foxes” willing to use any of the four means to achieve its goals: Saam, Daan, Dand and Bhed meaning persuade, gift, punish and divide. The Arthashastra comprised over fifteen books, totaling 150 chapters covering all aspects from political philosophy and theory to public administration, diplomacy, foreign policy and intelligence gathering.

According to Kautilya, your immediate neighbor is your natural enemy, and the neighbor’s neighbor is your natural friend because he can cover your neighbor’s territory but cannot invade you until he becomes your neighbor. Other Indian philosophers believed, would be emperors or sovereigns must build an empire within the subcontinent and not outside. Like the British Raj, the advocates of imperial foreign policy would like to see India as a significant force in the South Asian neighborhood and expect them to believe Indian security needs are theirs as well. Nehru had a Curzonian mindset when it came to the subcontinent and India’s adjacent states. Similar to American Monroe doctrine, Indira Gandhi believed in the primacy of India making security decisions for its neighborhood which came to be known as Indira doctrine.

Chanakya’s treatise covered aspects like the King as a leader, the qualities of a king, given to seeing elders (Vriddhadarshi), being duty centric (Dharmic), (Dhirga-dura-dharshi) –the ability to see long and far and daily routine of the king. Every chapter contains an elaborate methodology of how to run the business of a state. The king has to set an example with a top-down approach. One has to walk the talk and lead by example. An active leader can make an inactive person active. While active followers can become lethargic if the king demonstrates lethargy. A king must be a visionary leader with the ability to see a situation beforehand and foreseeing the things yet to come in the future. This is the capacity to think and create a future where long term objectives are achieved. A king must be born in high family, endowed with good fortune, intelligence and spirit, given to seeing elders, pious, truthful in speech, not breaking promises, grateful,  liberal, of great energy, resolute, not having a mean-minded council of ministers, desirous of training – these are the qualities of one easily approachable. A good king must develop the right way of thinking (Aanvikshiki), self-study (Svadhyaya), being just by giving the right amount of punishment, association with elders (Vriddhasanyogah) and being disciplined and punctual.

Aparna Pande’s descriptions of Kautilya’s treatises were applied to the rulers of the modern times like Nehru, Indira Gandhi, and Modi amongst others. Kautilyan influence is evident when one contracts the rhetoric of Indian policies and their actual implementation. For example, Nehru offered a façade to present his policies in moralistic terms, when in reality he was instrumental in building a strong military. Despite a close relationship with the western world, India maintained ties with Russia to develop layered alliances. In line with the Mandala theory, he mistrusted the allies. Nehru’s non-alignment policy is simply Kautilyan realism adapted to the reality of the contemporary world. Nehru was well versed in Arthashastra as its influences can be seen in his writings. Chanakya’s portrait can be seen hanging on the walls of political science departments of various Indian Universities – an indication of how seriously the modern day politicians, political students, and academicians take him.

Like Nehru, Indira Gandhi did not lay her trust on alliances, and she led her strategists to believe that India’s security involved having the Indian neighbors follow pro-Indian policies which became known as Indira doctrine. Primary principals of this policy were; “no foreign power should be allowed to cross the crest of the Himalayas’. India would consider influence or presence of external authority in the region a negative phenomenon unless that power recognized Indian predominance.”

In Modi’s India, Indira doctrine is evident in that, the power of the United States is being applied in the region after the USA recognized Indian predominance in the area. Excess United States involvement would be tantamount to negating the Indira doctrine. Initially, Modi tried reviving the troubled India-Pakistan relations; the attempts ceased when there was cross-border non-state party (terrorist) attacks in Pathankot and Uri in Kashmir. Modi canceled the 2016 SAARC summit in Islamabad with Afghanistan, Bangladesh, and Bhutan following India.

One can state, the future of SAARC and any fruitful inter-state dialogue is doomed to failure. India’s founding elites believed South Asia is central to their external relations in which India needs to be a vital player in the region vis a vis the world. This evolved from the ancient philosopher’s views and is a consistent pillar of India’s foreign policy. The elites believe India is the socio cultural and economic center in South Asia and a dominant power. India would like to see the world powers like China, the United States, and the West to recognize this dominance just as is expected from her neighbors.

While Aparna Pande devoted her writing to elevate Indian leaders, her analogies did not include the thoughts and feelings of the people living in the neighborhood. Sending the Indian army to Bangladesh in 1971 is seen by the Indians as a benevolent task, freeing the people of the then East Pakistan. The Muslim leadership in South Asia have an opposite view point. “Enemy of my enemy is my friend.” People in East Pakistan were enemies at one time, however, due to turn of events are now friends; a great Kautilyan analogy. If the 1971 war is a chapter from the Chanakya’s Arthasharta, we are yet to see more of them in the future. India is getting more powerful militarily and with the help of the United States and Israel, is aiming to become a superpower. Shelving the 1948 plebiscite of the United Nations about Kashmir issue, India has fortified Kashmir with the largest concentration of army personnel to control the area internally and externally.

The award-winning Indian author Arundhati Roy’s recent statement says, even if India increases its military footprint from seven lakh to 70 lakh in Kashmir, it wouldn’t be able to wrest Kashmir where it matters, that is in the hearts and minds of ordinary Kashmiris. Roy has always maintained a strong, anti-establishment view on Kashmir, which is a far cry from the centrist liberal, mainstream view of Kashmir being an integral part of India, made her a routine target of virtual assassination, she continually receives governmental threats as well as intellectual assaults from those threatened by her outspoken analysis of the deep-rooted malaises ailing India.

Another award winning writer Pankaj Mishra wrote; “Roy faces potent antagonists in the courts of law and public opinion; their calumnies throttle her freedom of speech and also destroy the relative freedom from worldly encumbrance and anxiety that allows a writer to stay in a room of her own and write.”

The extended family of upper-caste nationalists plainly aim at total domination of the public sphere. But they don’t only use the bullying power of the leviathan state – one quickly identified by local and foreign critics – to grind down their apparent enemies. They pursue them through police cases and legal petitions by private individuals – some criminal complaints have been filed against writers and artists in India. They create a climate of impunity, in which emboldened mobs ransack newspapers offices, art galleries, and cinemas.

And they turn the medium into their message in a variety of ways. Big business cronies of Prime Minister Narendra Modi’s Bharatiya Janata Party (BJP) are close to achieving Berlusconi-style domination of Indian television. The Hindu nationalists have also learned how to manipulate the news media and shape instant opinion: they hire, to use Erdogan’s words, a “robot lobby” on social media to drown their audiences in disinformation – until two plus two looks five.

African American writer W.E.B Du Bois states, “India, which has turned 70, seems to have missed the appointment with history. A country inaugurated by secular freedom fighters is presently ruled by religious–racial supremacists.” Virtuous talk of diversity and secularism has been replaced by a bare faced Hindu nationalism after Narendra Modi came to power in 2014.

The time has come to use Kautilya’s philosophy sparingly as a technical guideline to run a state. The modern day democratic state was not envisaged by Kautilya and hence, his philosophy should not be followed in dictum.

The concept of democracy was born in Greece but did not come to maturity in that culture, mainly because of their poor concept of equality. The American Declaration of Independence, together with the Constitution and the Bill of Rights, can be considered as the prototype of the foundation documents of all modern democracies. It was based on the assumption that man has a God-given rational nature guiding his free will as self-ruling. So, it placed reason before will. Aparna Pande’s book fails to address this particular issue of democratic values where every person is counted as equal and not have a ruling class or tiers of classes imposed on them. She did not have to make a comparative study as the book title says; “Chanayka to Modi”, only describing Machiavellian diplomacy in running a nation and not applying Arthashashtra to include a democratic India.

Here lies the Indian challenge to breaking free from their caste system which is embedded in their minds even today. The lowest caste (Dalits) and the minorities are still having a hard time coping up with the system and be included in what the West calls the largest democracy in the world. Majority people in India belong to the lower caste and the scores of minority groups. According to Arundhati Roy, these groups are not represented in the mainstream India and subjugated to various forms of discrimination that is not addressed by the system. Unfortunately, Kautilya did not visualize a system where all people were equal, and the ruler was elected by the majority. Modern day Hindutva attempting to create a Hindu state partly adopting Kautilya’s preachings is not practical in the modern context.