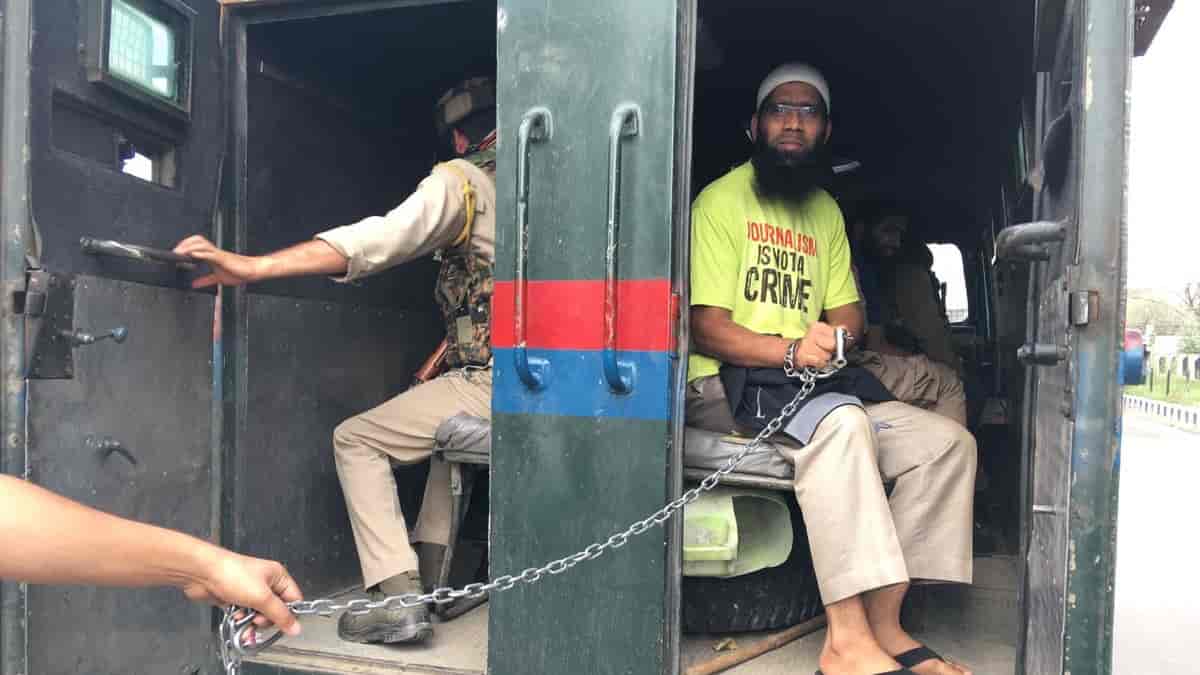 India, with seven journalists in jail, continues to invite criticism with its treatment of the media, in particular its use of the Jammu and Kashmir Public Safety Act, a preventive detention law, to keep Kashmiri journalists  Aasif Sultan, Fahad Shah and Sajad Gul behind bars after they were granted court-ordered bail in separate cases.

India with seven mediapersons (journalists) in jail, continues to remain at a record high for the second consecutive year since CPJ began its prison census in 1992;

India also continues to invite criticism die to, in particular, its use of the Jammu & Kashmir Pub,ic Safety Act, a preventive detention law, to keep Kashmiri journbalists Aasif Sultan, Fahad Shah and Sajad Gul behind bars after they were granted court-ordered bail in separate cases;

Six out of the seven journalists are being investigated under the counter-terror law, the UAPA;

7 Imprisoned journalists in India as of December 1, 2022:

The organisation, Committee to Protect Journalists (CPJ), had, in July 2022, also called on the European External Action Service to hold Indian authorities accountable for widespread and severe press freedom violations when they meet for the annual India-EU Human Rights Dialogue on Friday, July 15.

“The dialogue should be an opportunity for the EU to raise press freedom abuses with the Indian government, led by the Hindu right-wing Bharatiya Janata Party (BJP). However, statements from previous dialogues have been limited in scope,” said Tom Gibson, CPJ’s EU representative.

“As India seeks to gloss over its abysmal press freedom record, the EU must unequivocally condemn its harsh crackdown on journalists and media organizations, and make clear, verifiable demands, including the release of arbitrarily detained journalists,” added Gibson. “The EU should question what type of relationship it is building if critical journalists in India and Indian-administered Jammu and Kashmir cannot report without risking harassment, detention, abuse, or even death.”

Gibson also called on the EU to press India for action on the following press freedom violations and attacks on journalists documented by CPJ:

·Authorities’ use of the Jammu and Kashmir Public Safety Act, a preventive detention law, to keep Kashmiri journalists Aasif Sultan, Fahad Shah, Sajad Gul behind bars after they were granted court-ordered bail in separate cases.

·The ongoing pretrial detention of Gautam Navlakha (note: he is now under house arrest for the past month), Siddique Kappan and Mannan Dar under India’s draconian anti-terror Unlawful Activities (Prevention) Act.

·Indian authorities’ use of politically motivated charges to imprison journalists and their denunciation of critical journalists as attackers of traditional Hindu values. Full investigation into the deaths of five journalists killed in India because of their work in 2021 and prosecution of anyone implicated in the killings.

The entire report may be read here:

Kashmir: Journalist Aasif Sultan jailed under PSA, after getting bail

Does news of assaults on journalists not reach any minister’s reading list?