While Israeli consulate has apologized, the jury chair found it “disturbing” that the movie was in the competitive section 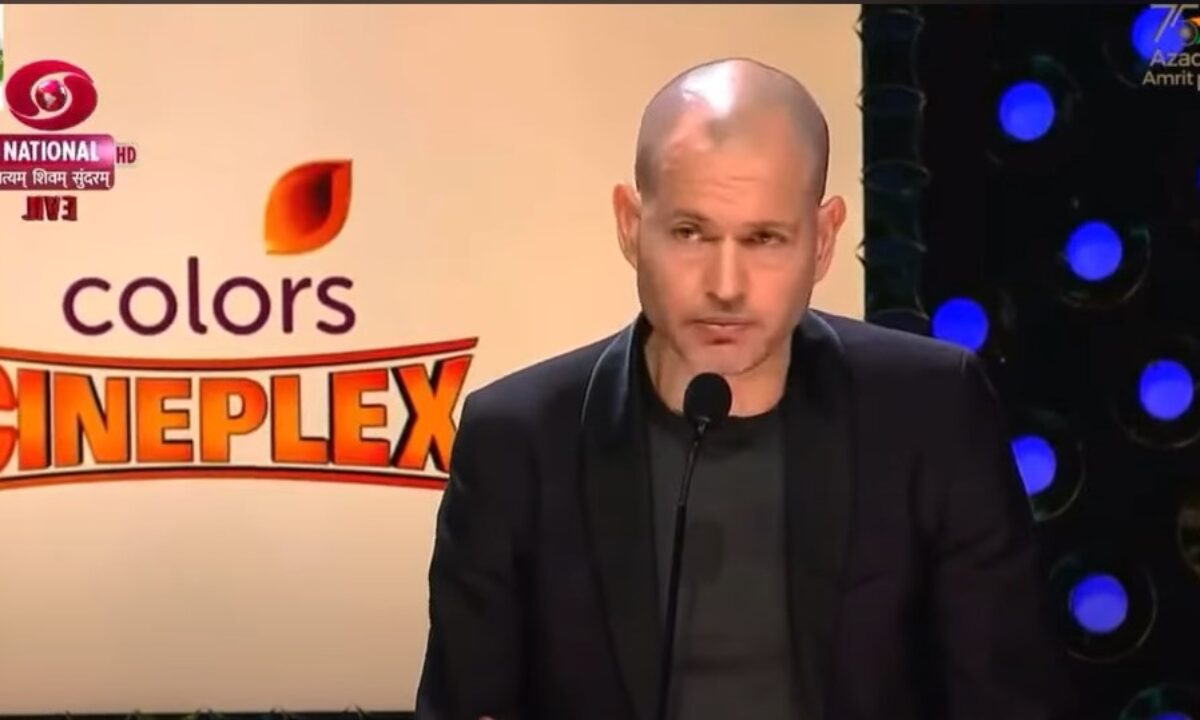 Israeli filmmaker and jury chair Nadav Lapid’s comments about Kashmir Files being ‘propaganda’ has caused waves. The comments were made at the 53rd International Film Festival of India (IFFI 2022). The foreign filmmaker claimed that Vivek Agnihotri’s film had the vibe of a “propaganda, vulgar movie.” He continued by saying that he was “disturbed and startled” that the movie was included in the festival’s competitive category.

In a video from the event, which has now gone viral on social media, Nadav Lapid can be heard saying, “We were, all of us, disturbed and shocked by the 15th film: The Kashmir Files. That felt to us like propaganda, vulgar movie, inappropriate for an artistic competitive section of such a prestigious film festival. I feel totally comfortable to share openly these feelings here with you on stage. Since the spirit of having a festival is to accept also a critical discussion which is essential for art and for life.”

The video can be seen here:

The statement had led to an uproar amongst the cast and supporters of the movie, and even stirred an upheaval in the central government, whose Ministers had openly promoted the said movie, which portrays the exodus of Kashmiri Pundits in the 1990s and allegedly holds Muslims solely accountable for the persecution of Hindus in the hill state. Anupam Kher, Mithun Chakraborty, and Pallavi Joshi play the film’s three main characters under the direction of Vivek Agnihotri. The film has received accolades from the government in India, with Prime Minister Narendra Modi and Union Home Minister Amit Shah both praising the acting and the storyline. Additionally, most of the states governed by the BJP proclaimed the movie tax-free.

The Kashmir Files, which was screened at the festival last week, was released in theaters on March 11. The movie revolves around the killings and exodus of Kashmiri Pandits in 1990 from the valley. While the film was a hit in India, many critics have criticized it and called out for its alleged propagandist tone.

Following the controversy, Israel’s Consul General to Midwest Kobbi Shoshani expressed his contrasting views on the film. He took to Twitter and wrote, “I saw the Kashmir files and met the cast. I have a different opinion than Nadav Lapid. After his speech, I told Nadav my opinion.” He also mentioned that he had been systematically trolled by supporters  of the film since last night.

BJP IT Cell chief Amit Malviya is one amongst the man who got offended by the remarks and responded via twitter that, “Israel’s Ambassador responds to compatriot filmmaker Nadav Lapid’s criticism of Kashmir Files. For the longest time, people even denied the Holocaust and called Schindler’s List a propaganda, just like some are doing to Kashmir Files.”

Referring to Nadav’s remarks, Anupam Kher, who received praise for his role in the movie, tweeted that “No matter how high the height of the lie is. It is always small in comparison to the truth.” He attached pictures from the movie with his tweet.

Meanwhile, Ashoke Pandit also slammed Nadav’s remarks. “I take strong objection to the language used by Mr Nadav Lapid for #kashmirFiles. Depicting the genocide of 3 lakh #KashmiriHindus cannot be called vulgar. I as a filmmaker & a #KashmiriPandit condemn this shameless act of abuse towards victims of terrorism.”

Media reports of people exiting the theatre showed how people were moved by the performances, regardless of the distortion of facts used to tell the story. Some people said that Indian Hindus must watch the movie that has told a truth hidden by the liberal groups.

However, the mood soon started getting heated inside the theatre halls where goons resorted to chanting slogans that often took an anti-Muslim hue.

Sanjay Tickoo of the Kashmiri Pandit Sangharsh Samiti (KPSS) had spoken out against the rank divisive propaganda in the film, while stressing the targeted violence faced by the Pandit Valley in Kashmir in the 1990s.

Genocide calls rung out in cinema halls, after the screening of The Kashmir Files. It was perhaps for the first time that open calls of hate against Muslims are being given in a public place. Video after video shows how some people rise after each show, in different cities, and claim that the movie has “revealed the truth to them.” Many have gone on to say that the movie is a “warning to Hindus to be careful” as if to indicate that Hindus are in danger. “Hindu khatre mein hain” was the slogan the Hindutva groups have been raising for years, even decades…

Video of one such incident can be seen here: (20) Kavita Krishnan on Twitter: “Calls for genocide of Muslims in theatres following the screening of #KashmirFiles. Will the film’s makers, actors, admirers including the PM appeal against such calls? You know the answer.” / Twitter

Singapore banned ‘The Kashmir files’, reportedly over its ‘proactive and one-sided portrayal’ of Muslims in Kashmir. The city-state’s officials fear it could provoke religious and ethnic tensions.

Veteran actor Nana Patekar had stated in an interview that this “is not right”, he stressed a message of communal harmony, pointing out that Hindus and Muslims live peacefully and harmoniously in India. He argued that people of both religions live here and the making and showing of such movies spoils the environment.

Actor Adil Hussain too expressed his views about the movie on Twitter. In his post, he said, “Truth must be spoken! No doubt about it. But must be spoken Tenderly. Else purpose of speaking the truth loses its beauty. And the impact is reactive.Not responsive. We, for sure, don’t want to fuel a reactive society but nourish a responve-sible one. Art Should not be reactive.”

Actress Swara Bhaskar and Gauhar Khan had also tweeted against the propaganda promoted in this movie. All the critics, mentioned above and more, were heavily targeted by the Right Wingers and suffered trolls.

In addition to this, Jammu and Kashmir Peoples Democratic Party Mehbooba Mufti had further condemned the manner in which the BJP had promoted this movie, especially Union Ministers. She had accused the ruling regime of weaponising Kashmiri Pandits’ pain and tearing apart old wounds. Another politician from the Opposition decrying the movie was Karnataka Rajya Sabha MP and Congress member Jairam Ramesh. He had described the movie as one inciting hate and propaganda.

Calls for genocide on social media

On March 20, 2022 Hindutva propagandist using the alias ‘Kattar Hindu’ on social media openly called for Islamic genocide. Citing a particularly gory scene in The Kashmir Files wherein a woman was made to eat grains soaked with her husband’s blood called upon “Hindus” to avenge the suffering of Kashmiri Pandits.

Using caustic language, he had instigated people to kill all “from young ones to old”. Making an ironic statement that he loves the country, he called upon people to wipe out the Indian Muslim community once and for all. He urged people to harass Muslims in any way possible stating that there is no need for a brotherly feeling among the two communities – once again, a singular statement considering the Indian Constitution’s endorsement of secularism.

Instead, he told his followed to abuse Muslims, sexually assault Muslim women of all ages, harass and torture them until they are forced to leave India.

“We won’t let them run from the country and we won’t let them live in the country. You all start harassing them,” he said in a video that has since been taken down from social media platforms. To top it all, he asked people not to engage in harassment publicly, openly accepting that the administration will arrest people because “the country is free and works on constitutional laws.” He further said, “The government will be forced to arrest you. Don’t do it openly. Think about whom you can target in a way that it doesn’t seem like you’re harassing them but they in fact do get harassed.”

With this, Kattar Hindu not only owned up to the illegality of the actions demanded, but also that such actions go against the constitutional sentiments of India. And despite all this, he encouraged people to message him if they could not think of ways of harassment. In the video he also threatened to slaughter 6-month-old Muslim babies into two pieces and give one each to their parents.

The Kashmir Files: Calls for Muslim genocide ring out in cinema halls, hate brews outside

Hate floods in the wake of ‘The Kashmir Files’

Kashmiri Pandits refute communal claims made in The Kashmir Files

Govt to Blame, Where is Security for KP Families in Valley, Asks Sanjay Tickoo, KPSS