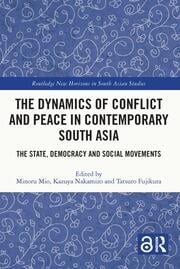 The Dynamics of Conflict and Peace in Contemporary South Asia The State, Democracy and Social Movements, a book edited by Minoru Mio, Kazuya Nakamizo and Tatsuro Fujikura. This book is a product of the symposium held in Kathmandu in January 2018, which was co-organized by the INDAS (Integrated Area Studies on South Asia) and Martin Chautari of Nepal under the title of ‘Peaceful Development of South Asia’. This book divided into three sections and including eleven chapters which examine and re-evaluate peaceful development in South Asian region. Peaceful development defined by the editors, they said, “Peaceful social development is defined here in a broad sense as the conditions under which the maintenance of social order and social development is achieved not by violent compulsion but through the negotiation of intentions or interests among members of society” (p. xi). Editors of the book try to argue for peaceful development and participation of all stakeholders to maintain social order not by violence but by negotiations of state and non-state actors through democratic principles and values.

South Asian states are more diverse than any region in the world and having high population density. One-third of the world’s poor population lives in this region, most of the people witnessed poverty and low rate of education. Per capital income in South Asian countries have only 16% of the world and very low in all human development indicators and socio-economic development. Democratization and deepening of democracy is still undergoing process but since Hindu right wing political party in India has captured state power through electoral process. They often bypass the constitutional morality. Most of the South Asian states claim to have democratic institutions but minority groups face more discrimination and violence in the name of religion, caste, and gender. State is more interested to counter the masses through violence than engage with more democratically to recognize their political and social rights, as minority groups. We can see in the case of Muslims and other minorities in India, Rohingya Muslims in Myanmar, and Tamils in Sri Lanka, etc. In this regard, resistance movements use violence means such as Maoism and religious groups while transcending the framework of state.

In this context, for peaceful development we must examine concept of democracy while keeping in mind the real socio-political condition of society.

This book also highlights some significant issues in South Asian’s democracies and majoritarian tendencies in the elected governments. For example Indian government with Hindutva ideology led by RSS-BJP shows discriminatory policy against minorities such as enactment of the Citizenship Amendment Act (CAA) and NRC. It has also been experienced in the case of Rohingya Muslims in Myanmar. In that sense both majoritarian governments continue to attack on cultural diversity, religious plurality and basic human rights to impose particular culture and ideology that is very conservative and non-democratic in practice.

The book has eleven chapters in three different sections; first part, which is about Democracy, State and Religion, has four chapters. First and second chapter examine the working democracy in India and Hindutva juggernaut, how RSS-BJP used caste and communal card against Muslim for gaining electoral mileage in 2014 election. In Uttar Parades in the name of Gau Raksha Dal, Hindutva groups play communal card against Muslims to polarize Hindu vote to get electoral benefits. Chapter third ‘Practicing the Right to Indifference: Secularism, Toleration, and Islamophobia’, analyses the emergence of anti–Islamic sentiment which inherited from colonial legacy. Idea of secularism also comes from western countries unable to resolve Hindu-Muslim conflict in long run in India. And Chapter four, ‘State and Violence in Burma/Myanmar: The Rohingya Crisis and Its Implication for South and Southeast Asia’, the study about Islamophobia from South to Southeast Asia to understand democratization process in this region. Particularly Myanmar state under the democracy and military rule treatment of Rohingya Muslim ethnic minority under Buddhist majority ruled state, now they become stateless and refugee.

The part second focuses on ‘Democratization and social movements’ how social movements have deep impact on process of democratization of society and state. In this section, we study particular cases of social movements in India, Nepal and Pakistan. This chapter underlined and gives account on five years of movements to understand Nepal state response of movement and in Pakistan well known Abdul Sattar Edhi for his philanthropy work by his Edhi Foundation. This is largest social network; provide range of social service in Pakistan. Chapter author Tahir observes that ‘Edhi embodied the values and the lifestyle of a Sufi. It is by embodying this traditional value that Edhi could transcend parochial religious divides that characterize so much of modern South Asia and become a true humanist’. And the last chapter in this book, Yoko Taguchi describes a case of citizen’s participation in the improvement of the urban environment. She observe how contemporary public–private partnership (PPP) an stress on de-politicization of citizen and promotion of free market oriented development this will create more tension between ‘political society’ and ‘civil society’.

Final part of book address how does a conflict end? This chapter, try to deal with conflict between Bengali and Jumma community in Chittagong Hill Tracts (CHT) in Bangladesh. Chapter gives details of the CHT Peace Accord of 1997 and how this accord tries to resolve conflict between deferent political stakeholders. Author also tries to explain conflict at grassroots level under the investigation of CHT Peace Accord of 1997. And he finds that lack of political will fail to resolve conflict and it will contribute more conflict in day to day life of stakeholders. And in the next chapter author Tatsuro Fujikura furthermore discusses how peace resolution failed to deal with political stakeholders in the context of Tharuhat movement in Nepal. After 2006 armed conflict these ‘Identity based’ movements gain more popularity to challenged national integrity in Nepal. After promulgation of new constitutions in 2015 this Identity based movement become inform of ‘class’ in local and federal election. Further author explains historical background with contemporary emerging movement which has not fit into the new federal setup. In this region, Tharu activist try to implement traditional method of self-governance called ‘barghar’ to resolve to socio-political conflict issues to make peace among all stakeholders beyond narrow interests.

In the last chapter ‘Maps, migration, melancholia’ by Pradeep Jeganathan, author starts with a personal visit to relative home in Jaffna in Sri Lanka. He discusses history of Tamil Vellalar community from 17th century to 1950s. Tamil Vellalar community dominated during the rule of Dutch and British. Tamil Vellalar community become very close to colonial rural because of high-status in civil servants and other dominated field which are very helpful for colonial masters. The domination of Tamil Vellalar creates conflict with Sinhala citizen in South region. During 1950s, the Sinhala leader Bandaranaike started the ‘Sinhala only’ campaign, which gave idea linguistic nationalisms in Sri Lanka. As the result anti-Tamil riots emerge in 1956 it led to one of the most violent conflict and civil war in modern history. After the end of conflict new socio-political and cultural relation emerge which reflect in contemporary cinema and literature. Jeganathan gives some example through film characters, how post-conflict life of Tamil people reflects hopelessness who neither part of separatist and militant in the Sinhala South.

South Asian region are still in the state making process. South Asian political system has different form of government like democratic, monarchy, military, majoritarian form of democracy. This kind of political system fail to address socio-political grievances of caste, class, minorities, gender, Adivasis, linguistic which create more conflict and ideological resistance movement against state in South Asia. The book successfully highlights and explains some new and old conflict in this context. And in my observation I could not find single article on Afghanistan and Maldives. The book tries to highlights a need to re-think concept, value and function of democracy in South Asia to address question of minorities, social and political resistance that affect peaceful development in this region. Towards this end, this edited book is a useful contribution for students and research scholars of South Asian studies, international relations and conflict studies, as well as the interested general reader.