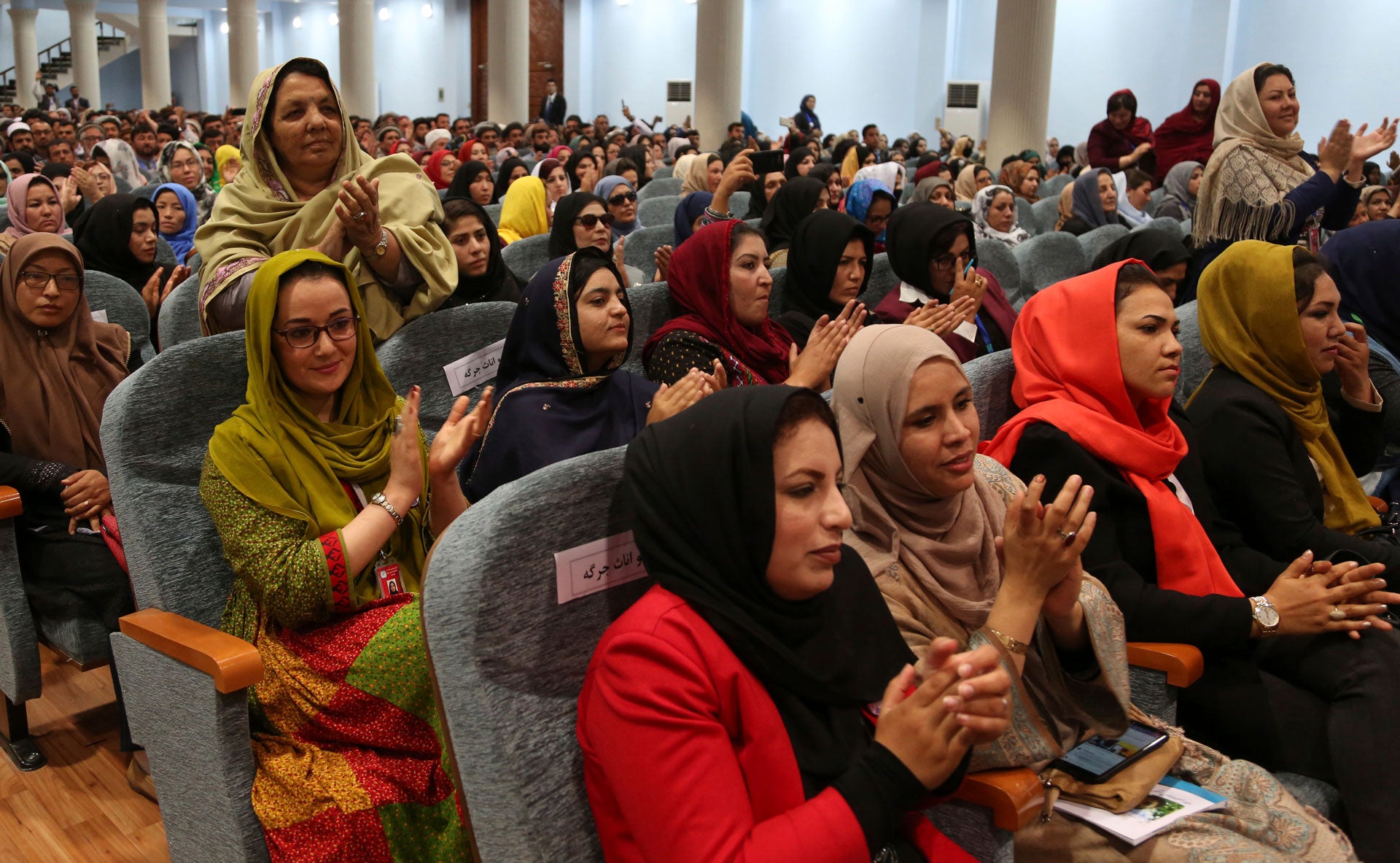 In July, former United States president and war criminal turned portrait artist George W Bush bewailed the impending withdrawal of US troops from Afghanistan, nearly 20 years after he ordered the invasion of the country.

Afghan women and girls, Bush warned, would suffer “unspeakable harm” on account of the American departure – an ironic assessment, to say the least, coming from the man who kicked off a “war on terror” that has thus far killed more than 47,000 civilians (including women) in Afghanistan alone and displaced millions.

To be sure, the plight of Afghan women at the hands of the Taliban has from the get-go offered a handy pretext for US military devastation.

Long before the 9/11 attacks even transpired, US politicians, celebrities and self-declared feminist activists had been pushing for a “liberation” of women in Afghanistan that conveniently dovetailed with imperial geostrategic interests. As if “B-52 carpet bombing”- to borrow the New York Times’ terminology – has ever been good for female humans, much less any other organism.

In November 2001, the month after the launch of Bush’s invasion, then-First Lady Laura Bush charitably took to US radio waves to assure listeners that the “fight against terrorism” was simultaneously a “fight for the rights and dignity of women”, and that the plight of Afghan women and children was a “matter of deliberate human cruelty carried out by those who seek to intimidate and control”.

Never mind that the same thing can be said of invading US forces who carry out “matters” like bombarding a Doctors Without Borders hospital in Kunduz with a Lockheed AC-130 gunship, incinerating patients and decapitating medical staff.

In her radio address, the first lady went on to righteously affirm that “civilised people throughout the world are speaking out in horror, not only because our hearts break for the women and children in Afghanistan but also because, in Afghanistan, we see the world the terrorists would like to impose on the rest of us”.

As for the world that the global superpower itself had already imposed on everyone else, there was no mention of international broken hearts on behalf of such civilising endeavours as the US sanctions on Iraq that had as of 1996 reportedly caused the deaths of some half a million Iraqi children of both sexes.

Indeed, the US’s transparently Orientalist civilising mission in Afghanistan – of a piece with age-old colonial rhetoric in the Middle East and beyond – becomes even more nauseating when one recalls the US track record of transparently uncivilised treatment of women worldwide.

To pick one example from an endless multitude, there was that time in the 1970s that the US gave the military junta in Argentina a carte blanche to go after its own “terrorists” – in this case, some 30,000 suspected leftists who were dropped from aeroplanes to their maritime deaths or otherwise dispensed with.

The BBC notes that the Argentine military “drew the line at murdering pregnant women”, who were instead “allowed to give birth in prison – only to be murdered a few days later”.

How’s that for women’s rights?

Then there is the perennial US carte blanche extended to Israel’s slaughter of Palestinian and Lebanese women and girls, in addition to men and boys.

Incidentally, the institutionalised US-backed Israeli terrorisation of regional Arabs played no small part in fuelling the 9/11 attacks. As the late Robert Fisk – the first Western journalist to interview Osama bin Laden – presciently wrote on the occasion of 9/11, “this is not really the war of democracy versus terror that the world will be asked to believe in the coming days”.

It was, he wrote, also “about US missiles smashing into Palestinian homes and US helicopters firing missiles into a Lebanese ambulance in 1996 … and about a Lebanese militia – paid and uniformed by America’s Israeli ally – hacking and raping and murdering their way through refugee camps”.

This final reference was to the three-day massacre of up to several thousand people in the Palestinian refugee camps of Sabra and Shatila in Beirut in 1982, the immediate aftermath of which affair Fisk witnessed first hand. In his book Pity the Nation, he described scenes such as the young child in a white, mud-stained dress who “lay on the roadway like a discarded doll” because the “back of her head had been blown away by a bullet fired into her brain”.

A female corpse meanwhile “held a tiny baby”, also dead, and someone had furthermore “slit open the woman’s stomach, cutting sideways and then upwards, perhaps trying to kill her unborn child”.

As Columbia University historian Rashid Khalidi reiterates: “The United States was responsible for the 1982 massacre of Palestinians in Beirut.”

So much for “civilisation”.

And yet the West never grows weary of its civilising missions – or all of the lies that sustain them. This grand exercise in deception is aided significantly by a mainstream press that tirelessly peddles recycled rhetoric to a public consciousness seemingly impervious to worldly reality.

One need look no further than the decorated foreign affairs columnist of the US newspaper of record: the New York Times’ Thomas Friedman, poster boy for imperial hubris and exact embodiment of the brand of paternalistic, sexist condescension with which the US relentlessly lectures the Arab/Muslim world on gender equality and women’s rights.

In his book Longitudes & Attitudes: Exploring the World After September 11, Friedman entered into a state of Orientalist rapture recalling a scene at Bagram airbase in Afghanistan, where al-Qaeda POWs were being treated to a “mind-bending experience” courtesy of the US military. This unparalleled educational trajectory allegedly saw the al-Qaeda members go from “living, as James Michener put it, ‘in this cruel land of recurring ugliness, where only men were seen’”, to being suddenly “guarded by a woman with blond locks spilling out from under her helmet and an M16 hanging from her side”.

After all, nothing says women’s empowerment like having ostensibly gender-enlightened New York Times columnists trip over themselves in ecstasy over the weaponisation of blond locks.

Mind-bending experiences aside, it goes without saying that a military that kills and otherwise punishes women across the globe – while also notoriously suffering from an epidemic of rape and sexual assault within its own ranks – is no blueprint for women’s liberation.

Flash forward to the US withdrawal and the rather mind-bending conviction, among certain concerned parties, that what is needed is further Western intervention to save Afghan females from the situation they are now in, thanks in large part to Western intervention in the first place.

Beyond the fact that the US war on its penultimate preferred existential menace – communism – directly set the stage in Afghanistan for the rise of the “terrorist menace”, there are plenty of other indications that the US was never actually in the business of improving the lot of women in the country.

As Rafia Zakaria – author, most recently, of Against White Feminism – comments in an article for The Nation, white feminists in the US decided from the outset that “war and occupation were essential to freeing Afghan women”, no matter what those women themselves thought.

Obviously, it requires a distinct level of imperial delusion to think that you can bomb and occupy women into a variety of freedom that they do not want to be bombed and occupied into.

Zakaria goes on to specify that hundreds of millions of dollars in development aid that the US “poured into its saviour-industrial complex relied on second-wave feminists’ assumption that women’s liberation was the automatic consequence of women’s participation in a capitalist economy” – an expected yet terribly misguided assumption given the oppressively patriarchal nature of capitalism, imperialism and all that good stuff.

Undoubtedly, it is immensely useful – from an imperial standpoint, at least – to have a bevy of self-identifying feminists on hand to whitewash US military barbarity.

Call it white-women-washing, if you will.

But, as the likes of George W Bush continue to decry the “unspeakable harm” that will befall Afghan women in the wake of the US military withdrawal, it is also worth reflecting on the harm done to US women themselves by a patriarchal capitalist society that spends trillions of dollars on wars abroad – rather than on healthcare or childcare or anything else that might benefit the average woman or human rather than, you know, the average US military contractor or corporation.

Such a reckoning, in the end, would be a real civilising mission.

The views expressed in this article are the author’s own and do not necessarily reflect Al Jazeera’s editorial stance.