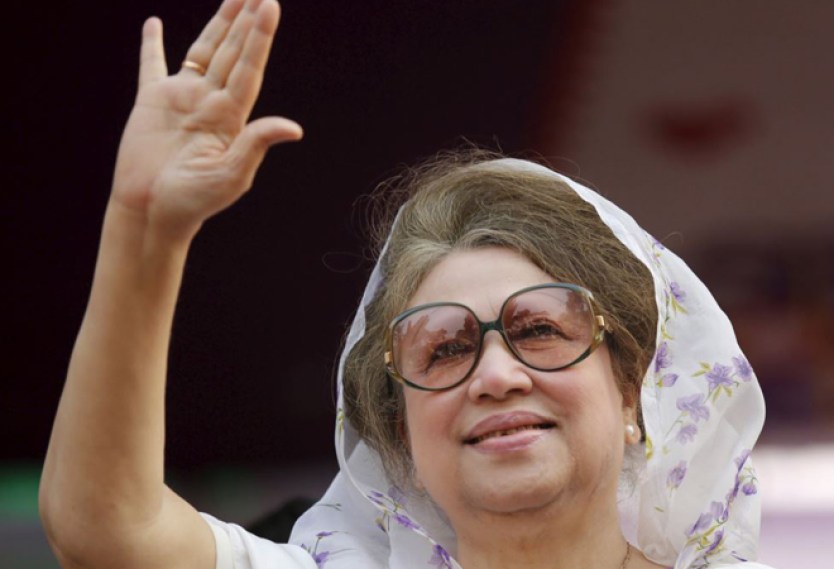 In a double whammy, Bangladesh’s High Court has dealt another grievous blow to Begum Khaleda Zia, former prime minister and leader of the Bangladesh Nationalist Party (BNP), the major opposition party. The court enhanced her sentence in a corruption case from 5 to 10 years.

Earlier, a trial court had sentenced Begum Zia, and her son and deputy leader of the BNP, Tarique Rahman (along with 10 others) to 5 years in the same case.

This comes at a time when Bangladesh is on the cusp of announcing the schedule for the general elections.

The BNP was at the receiving end of another adverse court verdict a few weeks ago.

Tarique and several opposition members were convicted in the grenade attack case of 2004, in which Sheikh Hasina was injured and several Awami League [AL] leaders and workers were killed. Tarique got life imprisonment, and 19 others who were accused, got the death penalty. A fugitive from justice, Tarique has been in exile in London since 2009.

These convictions may well pave the way for Bangladesh having its next general elections without Begum Zia, unless she manages to obtain a suspension of her sentence or it is set aside by a higher court.

Begum Zia’s supporters have maintained that PM Sheikh Hasina has conspired to remove her chief rival from the electoral scene by manipulating judgments of the courts.

Such allegations are par for the course in Bangladesh, but it is noteworthy that these cases were launched by the erstwhile Army-backed caretaker government in 2007 and not by the Bangladesh Awami League (AL) government which came to power in 2008. Both the law minister and Attorney General of Bangladesh have publicly stated that even if Begum Zia gets her sentence suspended by a higher court, she will be ineligible to stand for election.

Meanwhile, the electoral field has new formations. The 81-year old warhorse, Dr Kamal Hossain, eminent lawyer and former Foreign Minister, is leading the charge in cobbling together disparate groups of politicians in a Jatiyo Oikyo Front, akin to a Mahagathbandhan.

Dr Hossain had a bitter parting with the AL over his ambition to take over its leadership.

Faced with disarray in its ranks and boycotting elections no longer a viable option, the BNP has joined the new Front. The Front has already run into bad weather, marred by ideological and ego clashes.

Former President Dr Badruddoza Chowdhury of Bikalpadhara has walked out of the Front, creating a rift that certainly weakens the Front’s ability to challenge the ruling AL. He is now leading another coalition called the Jukto Front. Dr Badruddoza is founder member of the BNP and he too parted with the party on a bitter note when he was forced to resign by Tarique. He left the BNP and formed the Bikalpadhara.

PM Hasina Does an About-Turn

The bone of contention leading to the rift, has been the role of the Jamaat-i-Islami [JeI], the notorious Islamist Party, with a documented history of collaboration with Pakistan and committing genocide in Bangladesh’s bloody War of Liberation in 1971. Dr Chowdhury insisted that the BNP discard its Islamist allies and join the Front.

Dr Hossain remains unwilling to exclude the JeI, even after the Election Commission cancelled the JeI’s registration as a political party, making it ineligible to put up candidates in the forthcoming elections.

The JeI has been weakened considerably with the execution of its leaders for war crimes. While lying low, it has adopted tactics like infiltrating into other parties, including the AL.

Both Fronts have called for dialogue with the government. PM Hasina, after rejecting earlier calls for dialogue, has done a volte face and agreed to meet both the Front’s leaders – a smart change of strategy. The Jatiyo Front’s leaders who will participate in the dialogue, will include senior BNP leaders, some of whom are opposed to Tarique Rahman’s leadership – who they allege is primarily responsible for the problems faced by the BNP. Dialogue with AL is sure to drive a wedge between Tarique and senior BNP leaders, and make AL look reasonable.

The AL government is unlikely to accept the list of demands that will, no doubt, be presented by the Front for a free and fair election. A sure sticking point will be the demand that Begum Zia be freed and allowed to participate in the election. The AL government will definitely take the position that it is for the courts to decide Begum Zia’s fate. This issue might be another point of friction between the BNP and other parties in the Jatiyo Front.

On the face of it, the electoral prospects of the Sheikh Hasina-led AL may have brightened, with the main opposition party BNP marginalised.

Bangladesh’s economy has done exceedingly well, emerging as one of the fastest growing economies in the last quarter, surging ahead of India. The credit for this achievement goes to the policies of PM Hasina’s government. Her handling of the Rohingya migration issue has also earned her full marks globally.

The new political players in the form of the coalition Fronts are not likely to pose a huge challenge but can emerge as a viable, albeit a weak opposition. For the ruling AL, anti-incumbency and problems within its ranks are serious challenges. Till the 2014 elections, voters have elected either the AL or the BNP to power. The AL has become a fractious organisation and corruption has been eating into its vitals.

The minority Hindus, a loyal vote bank for the AL, are unhappy, as attacks on their property and temples, sometimes by AL local leaders, have not ceased.

Sheikh Hasina’s dalliance with and appeasement of some Islamist organisations has also offended many AL voters. A major purge of corrupt and communal elements in her own party is the need of the hour. PM Sheikh Hasina must be fully au fait with these challenges which if not tackled head on, can dent the AL’s vote bank in the forthcoming elections.

*Pinak Chakravarty is a Distinguished Fellow with ORF’s Regional Studies Initiative, where he oversees the West Asia Initiative, Bangladesh and selected ASEAN-related issues. He joined the ORF in October 2014.

A former member of the Indian Foreign Service (1977 batch), he has served as a diplomat in Indian Diplomatic Missions in Cairo, Jeddah and London. Later, was Consul-General of India in Karachi, 1994-1995; Counsellor/Minister, DCM at the Indian Embassy in Tel Aviv, 1995-1999; and Deputy High Commissioner at Dhaka, 1999-2002. At the Ministry of External Affairs (MEA), he served as Deputy Chief of Protocol, Deputy Secretary/Director in the Americas Division and as Director, SAARC Summit Secretariat, 1995. He was the Chief of Protocol from 2002 to 2006, after which he was nominated as Ambassador to the Philippines but later shifted to Bangladesh where he served as High Commissioner from 2007 to 2009. From 2010 to 2011 he served as Ambassador to Thailand. Returning to Delhi he served as Special Secretary (Public Diplomacy) before he was appointed Secretary (Economic Relations) in the MEA. He retired from service in September 2013.He is a regular contributor to newspapers, journals and books. His latest journal article is titled “Bangladesh-India Ties: Pragmatic Transformation,” published in the Indian Foreign Affairs Journal. One of his recent book chapters is titled “Bridging the Hiatus of History: India’s Look East Policy” in India’s Asia-Pacific Engagement: Impulses and Imperatives(Manohar 2015).He also participates in TV programmes on foreign policy and strategic affairs.