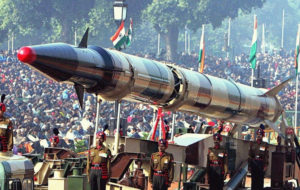 A country’s conventional, diplomatic, political or economic policy is important however is about the nuclear policy of any state it automatically becomes a highly sensitive and crucial matter. In a case like India and Pakistan, especially, when the rivals have been engaged in three major wars and one small-scale conflict along with everyday skirmishes along the border, the nuclear policy assumes great importance. In fact, the entire nuclear politics and its dynamics are of great interest not only for scholars of both states but also for the international experts. Starting from 1998, Pakistan’s nuclear policy has been surrounded with ambiguity for the state’s own strategic motives. India, on the other hand, has a De Jure open and clear nuclear policy but the De facto situation is not quite the same.

The scholars from the Indian side claim that the reason for their smooth terms with western states is due to the fact that they have a “No First Use” policy for their nuclear program. Yes, this is true that this term exists in the Indian Nuclear policy circles however, this term is attached to certain if’s and but’s i.e. there are some conditions attached to this infamous NFU policy. India claims to stick to NFU with an exception of a chemical or biological attack. This implies that in case of a chemical or biological attack NFU does not apply and the Indian army is very much likely to go ahead with a nuclear attack on the adversary regardless of the fact whether the adversary has resorted to a nuclear attack first or not. The second strategic loophole in India’s official nuclear doctrine is that it claims to stand by NFU as long as its deterrence upholds. This simply implies that as soon as the factor of deterrence is lost India’s choice would be of a nuclear attack. The key factor here is that where the threshold of deterrence ends is only to be determined by India and one can never be affirmative of where the threshold might end for it. Should India, at any point decide that its deterrence has failed its nuclear doctrine allows it to go ahead with a nuclear attack once again regardless of the fact whether the adversary has resorted to nuclear warfare or not.

From the above mentioned key facts about the loopholes or exceptions in the NFU policy of India one can gather that although India might be vocal about the NFU aspect of its nuclear doctrine, the exceptions of the policy are not clearly talked about. It will not be wrong to say that India’s NFU is not entirely a No First Use policy, it is a mere case of propagating the right clause of an entire sentence.

The point, however, is, why there is a negative connotation attached to the idea of first use policy? Why has India not clearly declared that it will and it can resort to the nuclear weapons first if needed? Pakistan has and the state certainly faces the heat for the bold declaration. The otherwise undeclared and ambiguous nuclear doctrine of Pakistan is very clear about one fact and that is using the capability the state has acquired if and only if required by the in hand situation. States like the US and France have been very clear about this as well. The reason behind having a first use policy is first of all protecting national and territorial integrity and secondly not waiting to be attacked before attacking, in other words, a preemptive strike. The state of Pakistan is responsible about its nuclear capability beyond limits but at the same time, the state is also aware of the hostilities it is surrounded by. Under these circumstances, it would be a rather childish move to deliberately not resort to the nuclear arsenal as a reflex action.

States must realize that playing the responsible state card is good to gain some benefits but just because one state is more concerned about the immediate and absolute safety of the territory does not make it any less responsible. Hence if a state deliberately keeps a first use policy it cannot be termed as aggressive, less responsible or a threat of any kind. If anything the policy of first use might be one of the best deterrents as it makes the adversary clear about the fact that nuclear attack might just be the first thing they face in case of an attack which definitely discourages any intentions of war from the enemy’s side.