WHY NOT BIOETHANOL PROJECTS FROM STUBBLE IN PUNJAB & HARYANA? 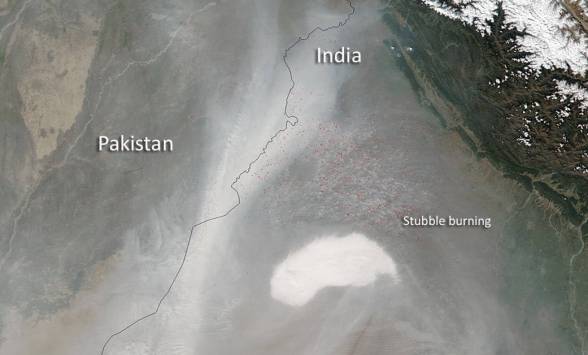 Delhi and most of north India have been enveloped by polluted air for the past few days, leaving people gasping for breath. The pollution problem is attributed largely to stubble burning in nearby Punjab and Haryana states.

There are two main growing seasons in Punjab and Haryana; one from May to September and another from November to April.

In November, farmers harvest rice and sow wheat in Punjab and Haryana. Since farmers need to sow wheat within a fortnight of harvesting paddy,  They often set fire to leftover plant debris to clear fields for the next plantings. This practice is known as stubble or paddy burning, which is an age-old practice in Haryana and Punjab. The farmers burn the stubble to save time, labor and money.

About 3 million acres are cultivated for paddy in Punjab alone, and 20 million tonnes of stubble are generated every year.

Stubble burning is no longer restricted to the Punjab and Haryana states but has spread to other states across Madhya Pradesh, Uttar Pradesh, Chhattisgarh, Bihar, and Odisha, making the problem even worse.

The harmful impact of stubble burning

For every four tonnes of rice or wheat produced, there is about six tonne of straw, of which at least four tonnes are burned.

Stubble burning raises topsoil temperature up to 33 to 42 deg. C. This destroys all potential microbial life up to about 3 inches below the soil, besides killing the life that churns the soil to release nutrients.  Charring does not help soil fertility.

Alternate options for the use of stubble

The common solutions are:

*  Recycling the stubbles into composts.  The compost is in high demand in the agro-market and offers the farmers monetary incentives.

Ethanol is largely produced from molasses, a byproduct of the sugar industry.

Cellulosic bioethanol is produced from different feedstock such as woodchips or crop residues (e.g., straw,) or energy crops (switchgrass, etc.) and stubble by cellulose hydrolysis.

For the production of cellulosic bioethanol, biomass such as stubble is first subjected to a pretreatment to open up the structure of the cellulose components and to separate sugars and involve further steps to produce bioethanol.

The overall maximum yield of ethanol from cellulosic biomass can be around 56% to 58%.

Since most of the ethanol is produced from sugarcane molasses in India, ethanol production in India is heavily dependent on the production of sugar and sugarcane, which fluctuates due to the cyclic nature depending on the vagaries of monsoon and climatic conditions. Indian production of ethanol is inadequate and is now considerably imported.

The government of India has made it mandatory for oil marketing companies (OMCs) – Bharat Petroleum, Hindustan Petroleum and Indian Oil Corporation – to blend 10% ethanol with petrol. This proposal of using ethanol for blending with petrol will increase the supply gap for ethanol in India considerably, that would lead to a steep increase in imports of ethanol.

Efforts for bioethanol projects in India

In the recent period, efforts have been made to set up facilities to produce bioethanol from cellulosic material such as stubble and others. However, these projects are in the preliminary stage in India.

The public sector companies such as Indian Oil Corporation have proposals to set up cellulosic bioethanol facilities.  However, such projects are still in demonstration stage.

Considering the urgency of avoiding the problem of stubble burning, the government of India should give the highest priority to set up many cellulosic bioethanol projects from in Punjab and Haryana and also other states where burning of cellulosic materials are being done.

It would be appropriate that a special task force should be constituted by the government of India to implement the bioethanol projects based on well-developed technologies abroad as well as research and development initiatives in India.