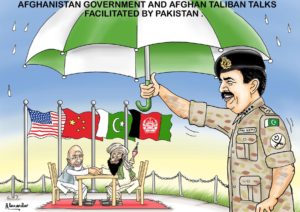 This past week, the Taliban entered the city of Farah, the capital of a province by the same name located in western Afghanistan. For a brief period, it took over several government buildings before being pushed out by Afghan ground forces and US airstrikes.

The offensive marked one of the relatively few times in the nearly 17-year war that the Taliban managed to seize areas in major urban spaces. It also highlighted the great reach of the insurgency.

Once limited to the Taliban’s traditional bastions in the east and south, it has now spread to western areas such as Farah, as well as to the country’s northern reaches. The Taliban now controls more territory in Afghanistan than at any time since US forces entered the country in October 2001. The Taliban has arguably never been stronger.

At first glance, this is perplexing. By some measures, the insurgency is a spent force. It has been hit hard on the battlefield for nearly 20 years. It has experienced a rapid series of leadership changes, which has exacerbated an ongoing trend of fracturing and factionalism within the ranks.

Yet the reality on the ground amplifies just how powerful the Taliban has become. According to the most credible estimates, the group now controls or contests 40-50 percent of Afghanistan’s nearly 400 districts. Additionally, casualty figures for Afghan security forces and civilians have broken new records, attesting to the intensity of the fighting.

So why is the Taliban so strong? The answers lies in factors and conditions both inside and outside Afghanistan. Inside the country, security forces are beleaguered and overburdened.

Though the US-led training mission has strengthened the capacities of Afghan police and soldiers in recent years, they continue to struggle to lead counterinsurgency efforts from the front — the position they have been in since the foreign combat war ended at the end of 2014.

Their most glaring struggles lie in air power (a notable deficiency, given the strong role that airstrikes play in counterinsurgency efforts in Afghanistan) and intelligence collection.

Additionally, local policing is a mess. The national government in Kabul has outsourced security responsibilities in many rural communities to pro-government militias that often fail to protect local populations. The Taliban has exploited this dynamic and projected itself as a better security provider, thereby winning over local populations in rural spaces, and enabling the insurgents to gain a foothold.

Furthermore, drug production is breaking new records in Afghanistan, and this benefits the Taliban’s bottom line in a big way. The opium trade accounts for a large portion of the group’s finances.

Iran has provided more modest levels of support to the Taliban, including small arms shipments and — according to officials in western Afghanistan, near the Iran border — training to some Taliban units.

Now that the Trump administration has pulled out of the nuclear deal, worsening an already-fraught US-Iranian relationship, Tehran will have a strong incentive to ramp up such support to the Taliban. Furthermore, according to US military officials, Russia may now be providing military support to the Taliban as well.

There is a basic truth about insurgencies: So long as they can count on external support — and especially external sanctuaries — they will not die. The FARC rebels in Colombia, for example, enjoyed safe havens in neighboring Venezuela. And they remained a formidable fighting force for more than five decades.

Finally, there is the US and its inability to craft a strategy capable of taming the Taliban. In the early days of the war, America had two clearly articulated goals in Afghanistan: Destroy the sanctuaries used by Al-Qaeda leaders to help plan the 9/11 attacks, and remove their Taliban hosts from power. Both objectives were achieved in relatively short order.

Ever since then, however, Washington has struggled to articulate a plan for tackling the Taliban threat — one with clearly stated and realistically achievable means and ends. Without a clearly articulated plan, it is very hard to succeed.

The takeaway? What the Taliban did in Farah is bound to happen again — many times, and in many different places around a country unlikely to see the end of its interminable war anytime soon.