Wake up Bangladesh; it’s time for a foreign policy! 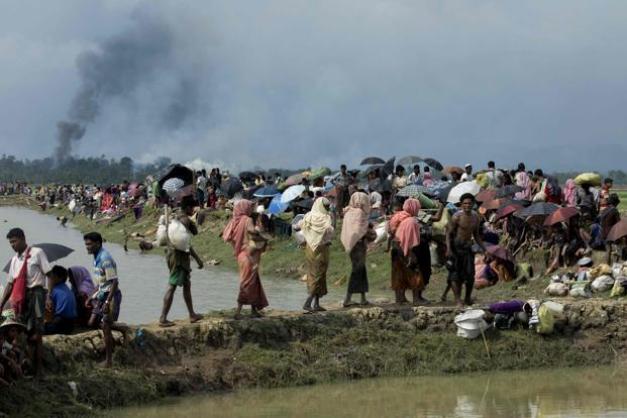 To some, the title of my column today might be utterly ridiculous, as it suggests it’s time for Bangladesh to have a foreign policy. They might raise eyebrows at my suggestion that, Bangladesh is going without any foreign policy, since 2009. To them, Bangladesh has a sound foreign policy under a seasoned career diplomat as Foreign Minister, and an internationally renowned scholar as the Prime Minister’s Adviser on international affairs. So far so good! However, the proof of the pudding is in the eating.

The subservience of Bangladesh to India, and its unconditional surrender to Myanmar, which has forced about a million Rohingyas as refugees in Bangladesh since 2012, don’t make the pudding any edible! Bangladesh is almost friendless. Most of its trading partners, China, Japan, Russia, and even India have been openly siding with Myanmar, the main adversary of Bangladesh. Whatever the Bangladesh Government sells as its foreign policy is something phony, not indigenous or made in Bangladesh. It has the fingerprints of the “smooth operators” at the South Block of the Secretariat Building in New Delhi, which houses India’s Ministry of External Affairs.

The laundry list of failures in Bangladeshi diplomacy is long. I’m going to mention some unresolved issues between Bangladesh and two of its immediate neighbors, India and Myanmar, in this regard. It’s strange but true, not only its powerful, immediate neighbor India frequently coerces Bangladesh into submission, but of late, its not-so-powerful neighbor Myanmar has also started browbeating Bangladesh.

Bangladesh has nothing to be proud of its relationship with India, which is both a bully and an undesirable hegemon for it. However, sections of Bangladeshis, who don’t believe in independent Bangladesh and want its merger with India, consider India as the Bandhu Rashtro (The Friendly Country). The rationale for their unconditional support for India is possibly also because of the latter’s support for the Liberation War of Bangladesh in 1971. Nevertheless, the Indian support was never unconditional or altruistic, as it also benefitted from the disintegration of Pakistan.

The avowedly pro-Indian elements never mention India’s hegemonic and intrusive behavior, and its ulterior motives against Bangladesh. The pro-Indian elements in Bangladesh enjoy the best of times when people and parties of their liking are in power. These parties and individuals at times suspend the Constitution and depend on the South Block of New Delhi to run the “foreign policy” of Bangladesh. Whenever such people are in power, the country of 160 million people behaves like tiny, land-locked Bhutan vis-à-vis India. This happened during General Ershad’s illegitimate rule and is happening again since 2009.

Despite many blunders and hiccups during the developmental phase of Bangladesh in the early 1970s, the Founding Father Sheikh Mujibur Rahman was brave and wise enough not to allow India, a free hand in running the foreign and domestic policies of Bangladesh. Soon after his freedom from Pakistani incarceration in January 1972, he made it clear to the Indian PM Indira Gandhi that Indian troops must leave his country, as soon as possible. Although Henry Kissinger used obnoxious expressions against Bangladesh and Sheikh Mujibur Rahman – he called the country a “basket case,” and its leader “an inordinate fool,” but for Mujib’s assertive and bold foreign policy, Bangladesh earned some respectability in the area of international politics.

One admires Mujib’s mottoes about Bangladesh’s foreign policy: a) “Friendship to all, and malice toward none”; and b) “Bangladesh will be the Switzerland of Asia,” in regards to maintaining an active neutrality in the area of international politics. However, thanks to the exigencies of the Cold War, and Bangladesh’s over-reliance on the geo-politically inept and economically bankrupt Indo-Soviet block to formulate its foreign and domestic policies during the tenure of Sheikh Mujibur Rahman, the country was not in the good books of the West, the Muslim World, and China. China and Saudi Arabia did not recognize Bangladesh up to August 1975.

After August 1975, it was time for Bangladesh to face the hostility of the behemoth India, which not only sheltered and armed hundreds of Mujib loyalists under Kader Siddiqui, who regularly attacked Bangladeshi border outposts from across the border, but it also started depriving Bangladesh of its due share of the Ganges waters. Until Morarji Desai became the Prime Minister in March 1977, at times, it appeared that India would turn Bangladesh into another Kashmir or Sikkim. Meanwhile, through adept diplomacy under the leadership of President Ziaur Rahman, Bangladesh defied Indian hegemonic design and became friends with the West, China, and the Muslim World.

However, the rot in the realm of Bangladeshi diplomacy set in with the illegitimate military takeover of General Ershad in 1982, which was a handiwork of the hegemonic Indira Gandhi regime. The end of pro-Indian Ershad regime in 1990 didn’t signal the end of Indian quest for establishing its hegemony in Bangladesh. Up to the election of Sheikh Hasina as the Prime Minister in 1996, India ceaselessly tried to destabilize Bangladesh by stirring up some “Hill Tribes” in the Chittagong Hill Tracts. It armed, trained, and infiltrated members of the so-called Shanti Bahini into Bangladesh to “liberate” Chittagong Hill Tracts in the name of creating a homeland for the Mongoloid Chakma, Marma, and Larma people touted as the subjugated aborigines of Bangladesh. The “Hill Tribes” of Bangladesh are the descendants of Myanmar refugees who came to the country after the 16th century. Most definitely, they aren’t Adibashis or aborigines of Bangladesh, by any stretch of the imagination.

As if Farakka wasn’t bad enough for Bangladesh, India erected another barrage across the Teesta! And yet another (Tipaimukh) is under construction across the Barak. Nothing could be more abysmally erratic than Bangladesh’s disastrous “foreign policy” since 2009. The Government since 2009 is unwilling even to protest India’s taking undue advantages from Bangladesh. India’s successful arm-twisting of Bangladesh – which seems to be the most willing victim – is worse than America’s gunboat diplomacy in the Third World. Thanks to Bangladesh’s “foreign policy” India unilaterally enjoys transit rights through Bangladesh territory; denies Bangladesh similar rights to trade with Nepal and Bhutan; its BSF kills Bangladeshi nationals at the border with impunity, and last but not least, India denies Bangladesh its due share of the Teesta waters.

Both Manmohan Singh and Narendra Modi not only duped Bangladesh by lying in defense of New Delhi’s bona fides, but they also coerced the latter into submission. In late 2011, PM Hasina’s International Affairs Adviser told me about the “impending” signing of the Teesta water sharing agreement between India and Bangladesh. In hindsight, it appears that Oxford-educated Manmohan Singh simply duped Oxford-educated Gowher Rizvi! Manmohan Singh conveniently singled out Paschim Banga’s Chief Minister Mamata Banerjee as the main obstacle to the free flow of Teesta waters into Bangladesh. Same theatrics happened again under Narendra Modi, who also used Ms. Bannerjee as the scapegoat.

So much so that PM Hasina, who Modi outwitted totally, out of sheer frustration said something publicly in New Delhi – which was grossly unbecoming for a head of government: “Didi se pani manga, pani nahi mila, bijli mila. Chalo achcha hi hua, kuchh to mila” (“We asked for water to Sister [Mamata Bannerjee], but only got electricity. Anyway, it’s not that bad, we at least got something”)! Despite Bangladesh PM’s stooping down to the level of an Indian chief minister, her “foreign policy” or “Hilsa Diplomacy” (she carried Bangladeshi hilsa fish as a gift for Ms. Bannerjee) didn’t work at all.

Last but not least, not only an Indian chief minister became an imaginary adversary of Bangladesh or an important factor in Indo-Bangladesh relationship, but in the recent past, India’s foreign secretary Sujata Singh – who was a government servant, not a politician – also played a decisive role in legitimizing the farcical Parliamentary Elections of January 2014 in Bangladesh. She came to Dhaka, met Ershad (who had earlier said he wouldn’t take part in the Elections) and soon afterward, like a tame circus animal the latter changed his mind, took part in the so-called election, and legitimized the Hasina Government.

Bangladesh Government’s latest ambivalent statements, gimmicks, and self-congratulatory delusional assertions can make people laugh and cry at the same time. Soon after the Myanmar Government’s crackdown on Rohingya minorities in Arakan on 25th August, which soon turned genocidal, forcing more than half a million Rohingyas to flee to Bangladesh, the Hasina Government behaved most unbelievably. Sheikh Hasina offered Aung San Suu Kyi, her Myanmar counterpart, joint Bangladesh-Myanmar military operation against Rohingya “terrorists,” and instructed the BGB not to let any Rohingya enter Bangladesh.

Meanwhile, various ministers in charge of Foreign Affairs, Finance, Roads and Bridge, Industries, and even the DIG Police of Chittagong Division have come up with some weird suggestions/opinions about the Rohingya Crisis. While Foreign Minister Mahmud Ali has considered the Rohingya refugees a terrorist threat to Bangladesh, the Finance Minister has blamed Myanmar for waging an “undeclared war” against Bangladesh. The DIG beat them all. In his speech at a public gathering in Chittagong, he singled out Pakistan’s military intelligence ISI for stirring up Rohingyas against the Myanmar government. His version isn’t that different from the Myanmar government’s wild allegations against outside forces for the ongoing carnage in Arakan. It might be unthinkable elsewhere, but police officers in Bangladesh also give speeches in public rallies, and give their opinion on various domestic and external issues, well-beyond their expertise and jurisdictions!

Surprisingly, there are no signs of Bangladesh Government’s taking any concerted and cohesive policy to address the Rohingya refugee crisis in Bangladesh. Soon after PM Hasina had abruptly “met” President Trump on the floors of the UN General Assembly on September 18th and talked with him for less than 20 seconds, Bangladesh’s Foreign Secretary told the press: “Trump told Prime Minister Sheikh Hasina, on Myanmar issue (Rohingya issue) we’re with you”. And we know he didn’t tell the truth because soon the PM told the press in the most undiplomatic language: “Trump is not going to help Bangladesh to resolve the Rohingya problem.”

Now, Bangladesh seems to have no Myanmar/Rohingya Policy, which would have been there had the country formulated a foreign policy of its own, by its own needs and priorities, not something made by the Indian Government. Bangladesh was never in such a dire situation diplomatically – totally friendless in its immediate neighbourhood and abroad – not even during the turbulent days of the early 1970s, when not only Kissinger but others also considered the country a “basket case”. Bangladesh government’s over-reliance on India at the cost of not maintaining a balanced relationship with the US, Western Europe, China, Pakistan, Japan, and the Middle East since 2009 is mainly responsible for this awkward situation. It’s time to have a foreign policy for Bangladesh, run by professionals keeping in view the best interests of the country, not for the benefit, and at the dictates of its malevolent and hegemonic neighbor, India.