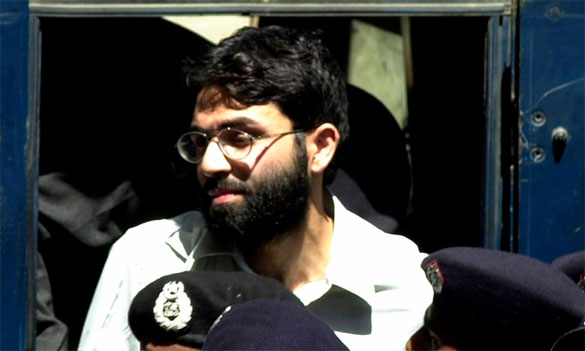 In his first statement on Pakistan as the United States secretary of state, Antony Blinken said America was ready to prosecute Omar Saeed Sheikh — the principal accused in the 2002 beheading of American journalist Daniel Pearl — in US courts, a day after he was acquitted by the Supreme Court.

On Thursday, a three-judge Supreme Court bench acquitted Sheikh by extending the benefit of the doubt to him and ordered his release. The Supreme Court issued the verdict on a petition filed by the Sindh government and Pearl’s parents against a Sindh High Court (SHC) order for Sheikh’s acquittal and immediate release.

Blinken, in a statement issued by his office late on Thursday evening, said he was “deeply concerned by the Pakistani Supreme Court’s decision to acquit those involved in Daniel Pearl’s kidnapping and murder and any proposed action to release them”.

“We are also prepared to prosecute Sheikh in the United States for his horrific crimes against an American citizen,” the statement read further.

“We are committed to securing justice for Daniel Pearl’s family and holding terrorists accountable.”

The chief US diplomat, who took charge of his office on Wednesday, recalled that Sheikh had been indicted in the US in 2002 for hostage-taking and conspiracy to commit hostage-taking, resulting in the murder of Pearl, the South Asia Bureau Chief for the Wall Street Journal, as well as the 1994 kidnapping of another American citizen in India.

Blinken termed the verdict as an “affront to terrorism victims everywhere” and said that the US expected Pakistan’s authorities to “expeditiously review its legal options to ensure justice is served”.

“The court’s decision is an affront to terrorism victims everywhere, including in Pakistan. The United States recognises past Pakistani actions to hold Omar Sheikh accountable and notes that Sheikh currently remains detained under Pakistani law,” he said.

Blinken also took note of the attorney general of Pakistan’s statement which said that the latter intended to seek a review of the verdict.

The US state secretary expressed similar sentiments in a tweet posted on Friday, where he said: “I am deeply concerned by the Pakistani Supreme Court’s decision to acquit those involved in Daniel Pearl’s kidnapping and murder. We are committed to securing justice for the Pearl family and holding terrorists accountable.”

This is not the first time the US has offered to prosecute Sheikh in America.

In a statement last month, the then US acting Attorney General Jeffrey Rosen said America “stands ready to take custody of Omar Sheikh to stand trial here” after the SHC overturned a government detention order that Sheikh should remain in custody.

Yesterday, White House spokeswoman Jen Psaki said the US was “outraged by the Supreme Court decision to affirm the acquittals of those responsible” for Pearl’s slaying and underscored the administration’s commitment to securing justice for Pearl’s family.

At her daily briefing, Psaki called on the Pakistani government to quickly review legal options including letting the US prosecute those acquitted.

With a majority of two to one, the bench ruled that Sheikh, along with other suspects including Fahad Naseem Ahmed, Syed Salman Saqib and Shaikh Muhammad Adil be set free forthwith, if not required to be detained in connection with any other case. The detailed reasons for the judgement will come later.

In a dissenting note, however, Justice Afridi partially allowed the appeals against acquittal with regard to conviction of Sheikh and Naseem under Sections 365-A and Section 120-B of the Pakistan Penal Code (PPC) and Section 7 of the Anti-Terrorism Act of 1997 and sentencing to life imprisonment on each count.

The top court’s verdict was termed as a “travesty of justice” by Pearl’s parents and their legal counsel said that the only legal avenue following the court’s decision upholding Sheikh’s release would be to ask for a review of the court decision.

“We also hope that the Pakistani authorities will take all necessary steps to rectify this travesty of justice,” the statement by the journalist’s parents said, adding that no amount of injustice would “defeat our resolve to fight for justice for Daniel Pearl”.

The Sindh government has also decided to seek a review of the SC decision, provincial Information Minister Syed Nasir Hussain Shah said in a statement yesterday.

Later, a spokesman for the office of the AGP said that the federal government was in contact and fully engaged with the government of Sindh in respect to the judgement in the Pearl case. It was confirmed that a petition seeking review and recall of the order of acquittal passed by the Supreme Court will be filed at the earliest.

Sheikh was accused of kidnapping Pearl in Karachi in Jan 2002 while he was carrying out research on religious extremism in the city. Later a graphic video showing his decapitation was delivered to the US consulate after a month of his abduction. Sheikh was arrested in 2002 and sentenced to death by a trial court.

In April 2, 2020, the SHC overturned Sheikh’s conviction for Pearl’s murder but maintained his conviction on a lesser charge of abetting the kidnapping, for which he was sentenced to seven years in prison.

Since Sheikh had been incarcerated since 2002, that sentence was counted as time already served by the high court. The SHC had also acquitted three other men namely Naseem, Adil and Saqib, who had been earlier sentenced to life imprisonment by a Karachi anti-terrorism court.