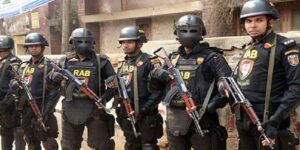 The survival of the sheikh Hasina regime in Bangladesh hinges on how the internal political dynamic copes with what is roiling in the international arena in the aftermath of the US imposed sanctions on December 10, 2021 against a number of police and Rapid Action Battalion (RAB) officials.

Internally, the main opposition Bangladesh Nationalist Party (BNP) is shackled by concocted cases against its leaders and workers, and by the imposed restrictions on their launching of a concerted movement to oust the government; despite the government being an illegitimate one due to the massive vote rigging that had lingered its rule for the third consecutive terms since the disputed December 2018 elections.

Sources confirmed, the country’s military, as the last bastion of the government’s surviving palliative, is deeply troubled by the latest UN decision not to clear the deployment of the three contingents of the army into an international peacekeeping mission in Congo (DRC).

Bangladesh is the largest contributor of UN peacekeepers. The military service in Bangladesh centres on the lure of ‘dollar dividend’ from UN missions abroad.

Hence, the fear of a military coup is ripe, and the rumours of a putsch swirl among the Dhaka elites as the Bangladesh-US ties go through the bumpiest ride in the 50-year-old nation’s history.

As the cocooned, lemon-squeezed Hasina regime tries desperately to wriggle out the US-imposed sanctions, the US is hitting hard on the incumbent Bangladesh regime’s proven corruptions and financial mismanagement.

Besides being a development partner, the US is one of the largest trading partners of Bangladesh; replacing all other countries as the destination for the country’s highest export, as well as remittance inflow.

Now, in concert with the Wold Bank and the IMF, the Biden administration is seeking explanation for missing $7.5b from the Bangladesh Bank reserve that is reported to have been laundered abroad by ruling party bigwigs through import-export under and over invoicing.

That aside, reserve currency of the country’s central bank, that acts as the collateral for international loans, has been squandered at will by the Hasina regime on grounds not justified by conventional financial regulations.

For instance, the central bank-approved rescue package to salvage the sinking Padma Bank, a privately owned entity, formerly Farmers’ Bank, is considered a financial malpractice by the Transparency International Bangladesh(TBI), a global think tank and watchdog.

The $200m short term loan granted to Sri Lanka in mid-2021 — now defaulted, and rescheduled for repayment in the next three months — is another example of an arbitrary financial highhandedness.

In December 2021, the central bank approved another $200m loan for the Maldives.

Such a generosity is displayed by a political regime that sustains on debt, taka 11,44,297 crores as of June 30, 2021 (one US dollar is roughly about 89 taka); almost 37 percent of which secured from global sources. Another over $5b was borrowed since.

The island nations of Sri Lanka and Maldives are tourist dependent. The lingering pandemic had devastated their economies to the brink of bankruptcy.

By late 2021, Sri Lankan foreign reserve dried down to a trickle above $1 b, while Maldives crawled on a paltry reserve of less than $900m.

Debt trapped with China with over $5b loan, Sri Lanka’s is virtually a bust economy, subsisting on a $750m SDR (Special Drawing Right) received from the IMF.

Sources say the decision to loan reserve money to other countries is a desperate last ditch attempt of the Hasina regime to squander the country’s central reserve before quitting power.

In February 2016, nearly $1b from the central reserve was hacked away by the same ruling clique; luckily stopped by the New York Federal Reserve after over $80m having already been disbursed to various Asian locations.

The regime of Sheikh Hasina is one of the worst autocracies in the world, having kidnapped nearly 700 of its political opponents and conscientious citizens since coming to power in 2009. Many of those were killed.

The concocted cases against political opponents number over 4m, while extra-judicial killings and forceful disappearances number 1000s more. Another over a million political victims rot in prison and in various torture cells, according to media reports.

Amidst the ongoing sanctions and global pressure, security forces have begun raiding the residences of the kidnap victims, confirmed reliable sources, to forcibly obtain signatures from victims’ families to the effect that ‘their kins were not kidnapped.’

This combustive combination of corruptions, autocracy, wanton rights abuses has made the Sheikh Hasina regime an outcast among the liberal democracies of the world, and, branded Hasina herself as a ‘mafia chief;’ an epithet popularly brandished in the global social media by the thriving Bangladeshi diaspora.

Can Sheikh Hasina withstand and overcome the concerted global onslaughts? The chances are too slim to bet on.