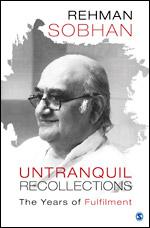 Writing history in Bangladesh always has been a sensitive activity, what with so many people hesitant to revisit their experience, especially during the war that brought independence to the country. Now the writing of that history has become risky with proposed legislation that criminalizes challenging myths of creation — like the numbers killed during the conflict and, perhaps, even how independence was declared.

Rehman Sobhan, now in his 80s after career that began as a young Bengali economist stoking the fires of independence for what then was east Pakistan, has entered the  history fray with a memoir, entitled untranquil recollections, that takes the reader from his creation to Bangladesh independence day.  Sobhan promises that he may continue his writing — “if providence wills that Sobhan should live long enough to relate it” —  to cover the aftermath of independence during which he played an influential role and which he labels intriguely in the last line of his story as “the cruel and divisive days that lay ahead.”

In the interest of full disclosure, sobhan and I have known each other for years. He acknowledges me among several readers who offered him “constructive suggestions”, although in the 45 years since Bangladesh independence I’ve been learning how little I knew during that period.

Sobhan is a loyalist. He regularly uses the honorific “Bangabandhu” in his references to Sheikh Mujibur rahman and admires the ability and work of Tajuddin Ahmed, who headed the Bangladesh government in exile during most of the nine months from March to December 1971. Among his heroes is Nurul Islam, the senior economist who pressed the case of East Pakistan’s unequal economic status against the resistance of the West Pakistan establishment. Another is his cousin, Kamal Hossain. I recall coming across both of them in the early 70s over noodles in Dhaka’s Hong Kong restaurant, discussing the Bangladesh constitution they were writing.

His villains are Zulfiqar Ali Bhutto, of course, Yahya khan and Khondakar Mushtaq Ahmed, who, while serving as foreign minister in the exiled government sought the CIA assistance of George Griffin for a peaceful solution that might have kept East Pakistan as part of Pakistan and who played a darker role after independence.

Sobhan declares “contemporary political discussions on the declaration of independence both mindless and pointless”, adding:

“Whatever may be the date of a formal declaration of independence for Bangladesh by Bangabandhu or anyone else, the effective independence of Bangladesh could be dated from 5 march 1971 when political authority over Bangladesh was devolved, on Sheikh Mujibur Rahman….”

Days after he fled east Pakistan to Agartala following the 25 march 1971 army crackdown in Dhaka, sobhan relates meeting  M. R. Siddiqui, the leader of the Awami League in Chittagong, who told him another Chittagong AL leader named Hanna broadcast an independence declaration on a relay station so weak the message was barely audible.

Siddiqui said local party leaders asked the then Major Ziaur Rahman to make another announcement, which he did, taking the opportunity to declare himself president of Bangladesh, omitting any reference to Mujibur Rahman. Siddiqui said he helped draft another message in the name of the Sheikh which Major Ziaur dutifully read a second day.

Sobhan added that in his subsequent meetings after the war with Zia the officer “never once made reference to being the proclaimer of independence nor did he ever make such a claim to the nation during his lifetime.”

He speaks frequently of genocide in connection with the Pakistan army’s March 1971 crackdown but avoids the numbers game played around the figure of three million dead that has become a sacrosanct if not official tally promoted by an Awami League-led government.

Sobhan does seek to dispel a Pakistani notion that India choreographed Bangladesh’s entire independence scenario. After reaching Agartala, he flew with a small band of Bengali fugitives  to new Delhi, where he related an account of events in East Pakistan, first to P. N. Dhar and then to P. N. Haksar, both close advisors to Indira Gandhi.

Sobhan writes he was surprised “at how little was known by the highest levels of the government of India of the specifics of the drama unfolding next door….” he found Indian officials puzzled by the presence of Tajuddin Ahmed, who was the senior-most Awami League figure in the absence of Sheikh Mujib and who arrived in new Delhi from east Pakistan soon after Sobhan’s group.

“Once Tajuddin reached new Delhi,” sobhan writes, “he was clearly the best person to speak authoritatively on behalf of the Bangladesh movement. However…this may not have been so obvious to the Indian leadership who appeared not to have heard of, let alone know any major political figure from Bangladesh apart from Sheikh Mujibur Rahman….

“The idea of a pre-planned Indian conspiracy to break up Pakistan appeared to us, from our direct exposure to the responses of those in authority in India, to be a figment of the Pakistani imagination.”

Sobhan is a member of a South Asian one percent, if not financially then certainly socially. His family connections, range from prince Hassan of Jordan to such leaders as H. S. Suhrawardy and Khawaja Nazimuddin. His litany of relationships by birth, marriage and schooling resemble the begats of genesis in the bible and would be of interest to a sociologist or even an anthropologist.

He was an odd duck to play any role in the independence of Bangladesh. Born in Calcutta, he was schooled in Darjeeling in India and in Lahore in West Pakistan and at Cambridge University in England. He spoke no Bengali but seemed driven to settle in East Pakistan when he could have devoted himself to research and teaching in Great Britain. When he reached Dhaka, as he puts it, “I was…a brown sahib, fit for a career abroad or in the civil service of Pakistan (CSP)…

“I chose, quite deliberately, to make my home in Dhaka….and to commit myself to a life of political engagement dedicated, however imprecisely, to the people of a land with which I was completely unfamiliar…..as an ideological decision to proclaim myself a Bengali.”

He quickly threw himself into the movement seeking economic equality for East Pakistan against the west Pakistan-based establishment, warning Cassandra-like of separation if too little was done to bridge the economic gap between the two wings of the country.

Sobhan’ s account of his activities in the years  of debate over east Pakistan’s complaints, from the 21 points of the 1954 provincial election though 11 points to the six-points under which sheikh Mujib sought virtual autonomy within Pakistan for east Pakistan, are personal and hardly exhaustive. Some may be outraged at not being mentioned, while others may be relieved at not being mentioned.

While personal, his history is valuable, if only because he served the Bangladesh cause as an insider, if not in the first tier around Sheikh Mujib, then in the second or third. During the tumultuous month of March 1971 in Dhaka, he served as a briefer of the foreign press.  After his flight from Dhaka later that month, he served to brief the Indian government and in visits to the united kingdom and the united states stirred public opinion in support of the independence cause and supported the defection of Bengali diplomats from Pakistani missions while at the same time taking advantage of his younger brother, who remained posted to the Pakistan embassy in Paris and his uncle who was Pakistan’s ambassador to china.

Sobhan’s Sheikh Mujib was a tower of strength during that 1971 march. he describes the strong views of student leaders pushing the sheikh to declare independence but calls Mujib’ s 7 march speech at the race course during which he spoke of independence but left it hanging in the air “the most masterful…of his political life.”  Others may recall the confusion of that time, and a leadership justifiably more uncertain than masterful.

Sobhan’ s Bhutto at that time, of course, was a schemer “more interested in negotiating a share of power with Bangabandhu rather than discussing the implications of implementing a constitution based on 6 points”, an accurate view. Bhutto was one of the few at that contentious time to understand that the people of east and West Pakistan had voted in the 1970 election to separate. That understanding was implied in Bhutto’s suggestion to create two prime ministers. For that was the outcome, unfortunately bathed in Bengali blood.