At midnight of 30th June 2017, India became one of the 160 countries to launch GST. The GST is a target based unified indirect tax and will remove all other indirect taxes. It is collected and levied on the value added at each stage. GST will be operated at both state (SGST- State collected GST) and central level (CGST- Central collected GST). Besides, the center will also collect Integrated Goods and Services Tax (IGST) in case of inter-state transactions. GST is a consumption-based tax and is regressive. The ultimate burden of this tax is on the final consumer of goods and services. So, whether your income is thousand, hundred or nothing you have to pay this tax, as long as you buy some commodity. There is uniformity in the tax between the rich and the poor. GST aims at unifying the country’s population under a single tax regime expressing the principle of one nation, one tax, and one market. GST will be collected under five tax braces of 0 percent, 5 percent, 12 percent, 18 percent and 28 percent.

India is a developing country where 21.9 per cent of the population still lives below the National Poverty Line (Basic Statistics 2017). United Nations Development Programme’s report shows that 55.3 percent of India’s population is living under multidimensional poverty and Human Development Index (HDI) for the country stands at 0.624 (0.454 only when adjusted for inequality). HDI Report 2016 placed India at 131st rank in a list of 188 countries. World Bank’s report on world development indicators also placed India at much lower levels than the global average (World Bank 2016). The public health expenditure in India is only 1.40 percent of Gross Domestic Product (the year 2014). 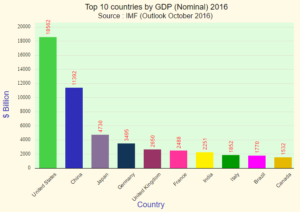 In development scenario India is much behind than countries like Japan, United Kingdom, France, United States, etc. but still having the highest GST in the world. However, the developed countries have set much lower rates of GST than India and are growing at faster rates, with almost nil amounts of poor people. Has the government gone through above economic indicators before implementing GST? Was it necessary for India to set the highest tax rates in the world? Sonal Verma and Neha Saraf analyzed that countries where tax rates moved higher, GDP growth pushes up, after following a temporary negative impact in initial years. The Reserve Bank of India in its research report named ‘GST: A Game Changer’ also showed the good performance of countries like New Zealand, Canada, Singapore, Malaysia after implementation of GST. One thing that is missing is the background of a nation. Every policy is based on the previous experience of the economy. India is a country where more than 25 lakh people die of hunger every year (Hunger Facts 2017). A large number of people are engaged in agricultural pursuits. They are earning less and living hard and as a result, farmers are committing suicides. National Crime Records Bureau of India reported 13,755 farmer suicides in 2012. How can the government expect these people as the bearers of tax? Besides, the economy is already facing disturbances due to demonetization. Imposing GST in such an economy and at this time will simply increase the inequality between the rich and the poor. International Monetary Fund (2001) on tax policy for developing countries suggested that consumer taxes play a diminished role in these economies. Therefore, the possibility that the government will impose high tax levels is virtually excluded. So, will GST boost the GDP and reduce unending corruption and inequality in India as expected; only time will tell?
Aijaz Ahmad Turkey