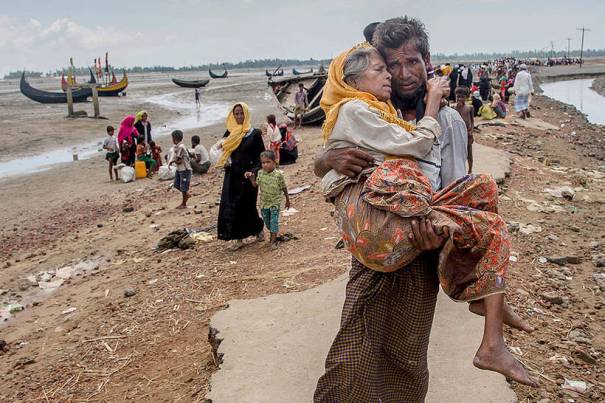 We urge UN delegations, especially those from the 114 countries committed to the Accountability, Coherence and Transparency (ACT) Code of Conduct, who made a pledge to support “timely and decisive action” to prevent or end the commission of genocide, crimes against humanity, and war crimes, to immediately undertake efforts to adopt a resolution in the UN General Assembly addressing the situation, and call upon the UN Security Council to consider measures to be imposed on the Myanmar government.

Over 400,000 Rohingya have fled across the border into Bangladesh since August 25, when Myanmar security forces launched operations in response to coordinated attacks by the Arakan Rohingya Salvation Army (ARSA) in Rakhine State. These operations, involving widespread killing, laying of landmines, looting, and arson targeting the Rohingya, have resulted in the mass destruction of more than 200 villages, according to satellite imagery and eyewitness testimony. Tens of thousands of people from other ethnic minorities have also been displaced as a result of the violence.

Strong condemnations by the UN and world leaders have not brought an end to Myanmar’s atrocities. In his opening statement to the Human Rights Council on September 11, al Hussein noted that in 2016 he “warned that the pattern of gross violations of the human rights of the Rohingya suggested a widespread or systematic attack against the community, possibly amounting to crimes against humanity.” Civil society organizations have warned that the campaign of Myanmar’s security forces against the Rohingya since August 25 amounts to crimes against humanity. It is crucial for UN members to take concrete action and place direct pressure on Myanmar’s military and civilian leaders.

The European Union, until recently, was the chief sponsor of an annual resolution on human rights in Myanmar at the General Assembly. Last year, the EU decided to stop the effort even in the midst of government violence against the Rohingya beginning in October 2016. Now, we urge members of the EU to work with the Organization of Islamic Cooperation, and the Association of Southeast Asian Nations, as well as other concerned states to jointly revive this resolution as a means of pursuing decisive action by the General Assembly in response to the gravity of the ongoing situation in Rakhine State and the evolving human rights and humanitarian crisis.

A General Assembly resolution should demand an immediate end to the abuses, that humanitarian aid agencies have immediate and unhindered access to populations in need, and for the UN Fact-Finding Mission authorized by the Human Rights Council in Geneva to be allowed unfettered access into and within Myanmar to investigate alleged human rights abuses across the country. It should also demand that the Myanmar authorities commit to ensuring that all Rohingya and other refugees and displaced people are able to return to their places of origin safely, voluntarily, and with dignity, and to dismantling the institutional discrimination and segregation of Rohingya and other Muslims in Rakhine State that forms the backdrop to the current crisis. The resolution should also urge member states and the Security Council to explore possible avenues to bring perpetrators of crimes under international law to justice.

We also urge members of the Security Council to add to the pressure on Myanmar authorities by seriously considering options such as an arms embargo against the military and targeted financial sanctions against individuals responsible for crimes and serious abuses.

All concerned UN member states should also consider bilateral, multilateral, and regional actions they can take to place added pressure on the Myanmar government. In particular, we call on all states to immediately suspend military assistance and cooperation with Myanmar.

If governments, UN officials and diplomats simply hold meetings and make speeches as atrocities continue in Myanmar, they bear the risk of failing to use every diplomatic tool at their disposal to stop the ethnic cleansing campaign and further crimes against humanity. In the face of mass destruction, killings and hundreds of thousands displaced, inaction should not be an option.

Canadian Centre for the Responsibility to Protect

Center for Civilians in Conflict

Center for Development of International Law

Coalition for Justice and Accountability (COJA)

Coalition for the Rights of Refugees and Stateless Persons (CRSP)

Global Centre for the Responsibility to Protect (GCR2P)

Institute on Statelessness and Inclusion

International Campaign for the Rohingya

International Coalition for the Responsibility to Protect

Jewish Alliance of Concern Over Burma

PROHAM (Society for the Promotion of Human Rights Malaysia)

Society for Rights of Indigenous People of Sarawak

The Jacob Blaustein Institute for the Advancement of Human Rights

US Campaign for Burma