Turning our back on the Rohingya genocide: ‘But this is so un-Australian!’

One of Myanmar’s (Burma’s) ethnic minorities, the Rohingyas, are the world’s most murdered, hunted, humiliated, dispossessed and displaced people.

Rohingyas have lived in Myanmar for centuries and some of them have even been close colleagues of General Aung San, the assassinated nationalist leader of Myanmar and the father of Myanmar’s de facto leader, Aung San Suu Kyi.

Rohingyas have also been active participants in the NLD’s (National League for Democracy party, which Suu Kyi heads) democracy and human rights movements for decades, for which some courted arrest and were tortured but still remained undeterred in their support of “the Lady”. Thus, when Aung San Su Kyi won the election in 2015, the Rohingyas were ecstatic. They thought their bad days were over but, alas, this was not to be.

Aung San Su Kyi betrayed Rohingyas and, in fact, the Myanmar military’s brutal persecution of Rohingyas – according to U.N., a “genocide” – have become  more intense since 2016, soon after Aung San Sy Kyi took over as the country’s de facto head of government.

Figures vary, but since August this year, close to 5,000 Rohingyas have been murdered, a large number of women have been raped and/or brutally sexually mutilated, villages have been burnt to ashes, children slaughtered and babies even thrown into the blazing fire of torched houses and burnt alive, triggering an exodus of approximately 600,000 men, women and children fleeing into Bangladesh, the neighbouring country. Some took to the river to cross the border, drowned. Close to 200,000 refugee children are now either orphaned or are separated from their parents. 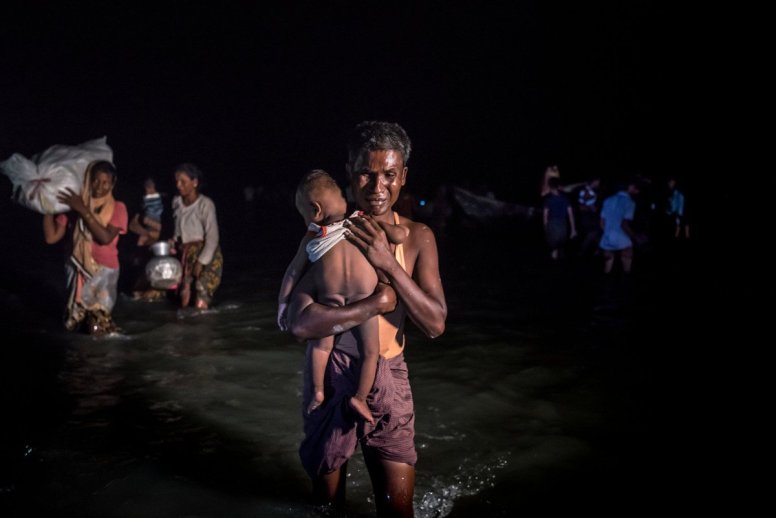 Bangladesh, a poor country of 160 million people crammed in 150,000 square kilometres, whose capacities are rather limited and where their own people struggle to survive, has been extremely generous in welcoming and accommodating this sudden and massive refugee influx, which the U.N. says the largest of human movements in Asia since 1970s. The shelters in Cox’s Bazar – the bordering district of Bangladesh, where most Rohingya refugees are housed – are overcrowded, people are hungry, children are malnourished, sanitation are poor and outbreak of cholera looms large.

The entire free world has been quick in condemning the carnage. Some have followed up with curtailing business with Myanmar and some are contemplating sanctions. The World Bank has suspended its loan to Myanmar. The U.S. has berated the Myanmar military as “brutal” and banned military aid to the country. The EU has cut all ties with Myanmar’s military and stopped its arms sale. Britain has also suspended its police training programme.

However, the notable exceptions are China, Russia and India who, instead of condemning, have sided with the Myanmar Government and, by the way, the records of these countries in minority abuse are not exactly stellar either.

Intriguingly, Australia, which is historically known for upholding high standards of human rights and social justice, seems to have joined the cabal of the collusive opportunists. And among these, India, in contradiction to the R2P (Right to Protection) principle has gone to the extreme, declaring 40,000 Rohingyas who have crossed into its territory as “illegal immigrants” and not refugees and thus has deported some back to where they came from — the slaughter house.

Mr Modi, India’s Prime Minister, even flew to Naypyidaw, the capital of Myanmar, at the start of the massacre and stood shoulder-to-shoulder with the tormenting Generals to express his unequivocal support for the Government’s actions.

Admittedly, Australia’s response has been less atrocious than that of the self-seeking trio but hardly inspiring. The Turnbull Government has so far refused to condemn the military action directly.

In response to a petition, the Assistant Minister for Immigration and Border Protection, the Honourable Alex Hawke MP, has stated that Australia has committed ‘$20.0 million in humanitarian aid’ (Bangladesh spends $5 million a day for the refugees) and has called for ‘restraint by authorities’. 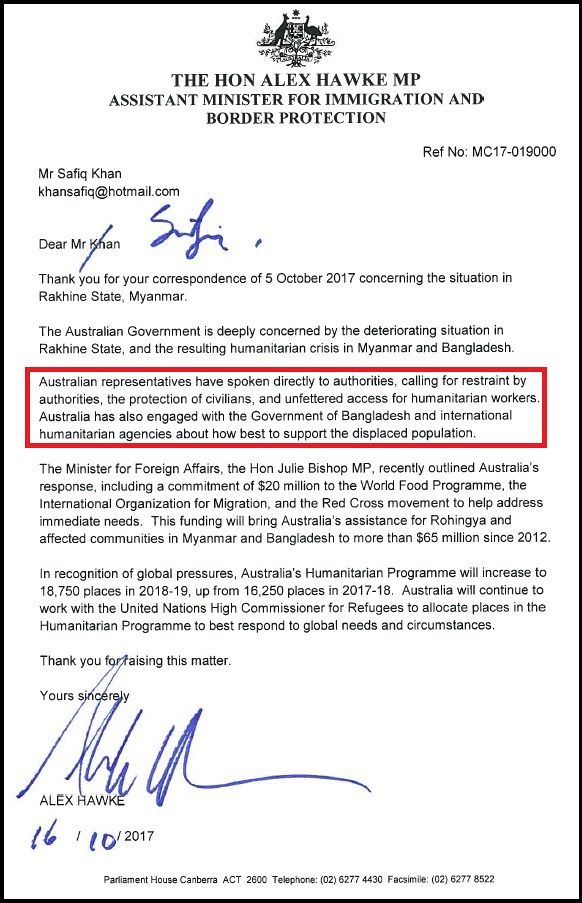 These are steps in the right direction, but hardly reassuring. For example, it has been reported that the Foreign Minister Julie Bishop avoids the media on the issue and, instead, has released the following message through her office:

‘We condemn all abuses of human rights and call on those responsible to be held to account.’

Bishop’s message uncannily echoes Aung San Suu Kyi’s evasive and much criticised speech to the nation of 19 September 19, where she said:

“We condemn all human rights violations and unlawful violence.”

Evidence coming out of Myanmar suggests that Turnbull Government’s counsel of “restraint” (which in diplomacy terms is a euphemism for “see-no-evil-hear-no-evil”) have had no effect on the military. On the contrary, Senior-General Min Aung Hlaing, the commander-in-chief of the Myanmar Armed Forces and the architect of the Rohingya persecution project, has remained uncompromising against 1.1 million Rohingyas and his scorch-earth policy against them continues in earnest. In the last couple of days, there has been a fresh influx of Rohingya refugees into Bangladesh. This puts to question the real intent of the Turnbull Government’s Rohingya policy.

A couple of days ago, when my wife heard from me of Australia’s ambivalence towards the issue of Rohingya genocide, she was shocked and exclaimed:

“But this is so un-Australian!”

It is hard to disagree.

Australia needs to be bolder in its condemnation of Myanmar government for a number of reasons. It needs to be true to what is known as Australian value and thus be on the side of the tormented and not the tormentors, for if it chooses the latter it will cause the entire Australian nation to lose its moral supremacy — not just in the region but in the entire free world. Furthermore, Australia needs also to be aware that more than half a billion people, who are its close neighbours, have emotional ties with the persecuted Rohingyas. They are deeply saddened by, and are seething with discontent at, the horrific treatment of their compatriots by the Myanmar’s military and look upon Australia to take a more principled position on the issue.

Against this backdrop, I would argue that the longer Turnbull Government takes to condemn the Myanmar government for its atrocities, and hesitates to stop its cooperation with Myanmar in aspects that directly and/or indirectly assist Myanmar’s military to continue its genocidal acts and further it ignores actions that are vital for quick, safe and dignified repatriation of refugees back to their homes in Myanmar, the greater the risk of Australia encountering hostile geostrategic and security consequences in the region.

The author is an adjunct professor at the School of Social Sciences, University of Queensland and a former senior policy manager of the United Nations. Professor Adil Khan is also a member of newly formed Rohingya Support Group, Queensland.

The article appeared in the Independent Australia on 20/10/2017