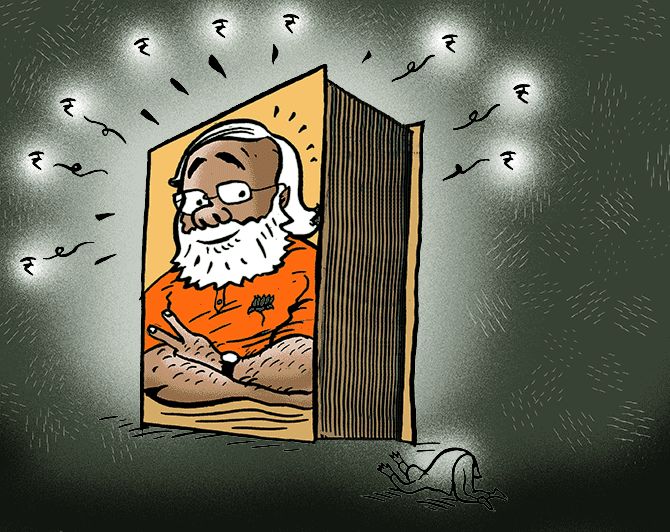 The revival of the vibrant Indian economy depends on rebuilding public trust in economic systems and institutions based on inclusive politics and peaceful social coexistence in India. The prolonged geopolitical disputes with neighbours and self-inflicted communal conflicts are pushing the Indian economy and society to uncertainties, which breed distrust and undermines economic growth and development. The pervasive inequalities help to accelerate the environment of trust deficit in the country. The growing discontents and Modi led authoritarian governance models are twin setbacks to the Indian economy. It does not help to revive trust and optimism; it rather deepens the economic, social, and political crisis. Therefore, it is critical to rebuilding trust in society for economic recovery. There are important ways to restore trust for the revival of the economic growth story of India.

The Hindutva forces led by Modi are spreading rampant Islamophobia and anti-Muslim programmes in the name of cultural revival and cow protection. The patronage of the state and government is accelerating social and inter-religious conflicts in India. Modinomics and Hindutva politics has destroyed social harmony, peace, and stability which inspires producers and investor’s confidence, and ensures economic progress. Social instabilities and conflicts are stumbling blocks in the processes of economic growth and development. The citizens’ concerns about uncertainty, safety, and security of life and livelihoods are seriously affecting economic productivity. It produces a culture of mutual distrust in India.  The elusive speeches and media management by the ruling Hindutva regime does not stimulate economic recovery. The investment in non-merit goods like temples further alienates economic actors from the economic system. Such a trajectory is not sustainable both in the short-run and long run. The economic recovery will require a renewal of trust in a secular, liberal, and democratic society and politics. The egalitarian approach to accessibility and availability of goods and services is a prerequisite for a vibrant economy based on mutual trust. The defeat of Hindutva politics is central to the progressive project of social, political, and economic revival in India.

The narrow inward-looking attitude of Hindutva politics and Modinomics has destroyed regional peace and the future of regional integration is hanging in jeopardy. In the world of interdependence, regional peace, stability and mutual trust are three important ingredients to attract large capital investments. The capital investment and its mobility depend on social and regional peace and stability. The removal of regional barriers to capital and labour is central to regional peace, stability, and economic integration. The bigoted politics of Hindutva and its chauvinism is an obstacle to the growth of regional trust. The Hindutva politics and Modinomics are twin disruptive forces that shatter public confidence in state and government. It will have serious long-term impacts on India and Indians.

Modinomics led by the reactionary Hindutva ideology is destroying the Indian educational system and its scientific ethos by reducing funding and increasing the Hindutva mythology in the curriculum. Such a trend in India will create an environment of the unskilled and uncompetitive labour force in the age of artificial intelligence, automation, and data-driven global economy. It destroys trust in the quality of Indian education and training which would compromise the creative, innovative, technical, and scientific skills in India. The treacherous Hindutva road to economic development is a disaster.

The implementation of tangible and inclusive economic policies to support farmers, small scale industries, entrepreneurs and consumers can revive trust in the Indian economy. But Modinomics lacks vision and commitment to address citizen’s concerns as a result of which citizens do not trust the government and question its ability to deliver. The Hindutva led Modinomics is incompatible with the needs and desires of Indians. The shallow public relations exercise does not work. It is clear that Hindutva politics is subservient to capitalist classes in India and Modinomics is their project. These disruptive bigoted forces cannot create an environment of mutual trust for the growth and development of the Indian economy. India and Indians need a new compelling political, social, cultural, and economic narrative based on trust. Therefore, it is the responsibility of all Indians to develop a collective vision based on mutual trust to revive a sharing and caring economy that works for all.

Modinomics is a cocktail of deceptive promises and fabricated propaganda for electoral sloganeering.  The economic salvation promised by Modinomics is a mirage branded and packaged well for electoral dividends. The fairy tale of Modinomics lacks any understanding and imagination of macro and microeconomic policy perspectives and directions. Indian economy lost its positive vibes due to the trust deficit of Modinomics inflicted by the Hindutva politics. It is not personalities but policies shape the economic directions with the help of constitutionally mandated decentralised institutions. Individual dominance destroys the efficiency and legitimacy of the institutions. The weakening and dismantling of well-established economic institutions with centralisation power and decision making has further accelerated trust deficits in the Indian economic system led by Mr. Narendra Modi under the guidance of the RSS. Modinomics is legalised plunder of national resources by the corporates.  Modinomics is a neoliberal class war on the poor in India. It has destroyed the opportunities for long term economic development in India by ruining the confidence of producers, consumers, and investors. Trust is an invisible currency, which has both use and exchange value in economics. The long-term economic growth and inclusive development depend on the level of trust prevalent in politics, society, and the economic system. The resource transfer to the big corporates, giving tax concessions and tax cuts are myopic and short-term stimuli that do not work in an unfaithful social and political environment. It is easy to destroy public trust in public institutions and difficult to rebuild it. The pandemic of trust deficit is integral to Modinomics. The only alternative is to abandon the political and economic project of Modinomics to revive the Indian economy.