Threats of Climate Change and Implications for India 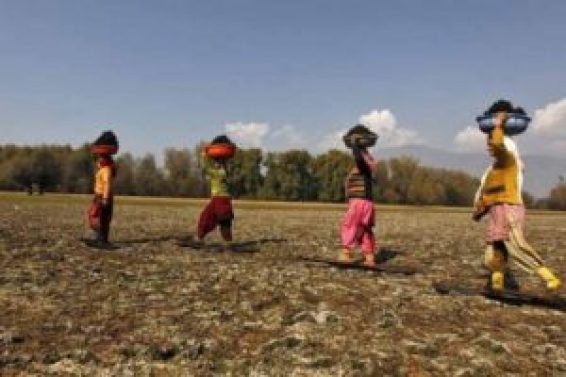 In December 2015, the parties (member-countries) to the historic Paris climate agreement agreed to the long-term goal of the pact – to keep global temperatures “well below two degrees C above pre-industrial levels and to pursue efforts to limit the temperature increase even further to 1.5 degrees C”. Even if the Trump Administration led the US to withdraw from the significant and successful Climate conference calling it a hoax, the recent report released by the Intergovernmental Panel on Climate Change (IPCC) – a body designed to provide scientific analysis of the causes, impacts and solutions to rising global temperatures, argues that the impact of a 1.5C increase in global temperatures will “disproportionately affect disadvantaged and vulnerable populations through food insecurity, higher food prices, income losses, lost livelihood opportunities, adverse health impacts, and population displacements”. The report is crucial also in its reference to the damage already done to the climate when it asserts that human activities have already caused approximately 1.0°C of global warming above pre-industrial levels and projects it to reach 1.5°C between 2030 and 2052 if the trend continues.

The report examines the goal of the Paris climate agreement and takes into considerations the impacts of even allowing 1.5 degrees C above pre-industrial times and concludes that the implications would be catastrophic particularly for countries such as India with high density of population and economic activities and where major chunk of population depends on natural resources for their livelihoods. There is high level of social inequality and poverty in India as well and in this context, climate change is viewed to have adverse social implications. India, primarily an agrarian economy with a high dependence on rainfall is anticipated to wade through difficult times with a slight rise in global temperature and further it is speculated that there would be significant pressures on India’s water, air, soil, and forest resources. It is worth-mentioning that many people making their livelihoods from agriculture and fishery are susceptible to rise in sea level, frequent occurrences of droughts and floods. India is projected as one of the few countries to encounter gigantic economic losses from climate change considering the total costs that emissions would have on the country’s economy. It is significant to underline that the US, India and Saudi Arabia are projected to be the top three counties to bear the most losses from climate change and India stands second to the US followed by Saudi Arabia.

India, which is already witnessing a rise in humidity level in many of its territorial parts, the report states that could witness deadly heat-waves if the planet’s temperature goes up by two degrees Celsius. However, restricting the rise of temperature even to 1.5 degrees Celsius will be a herculean task and require rapid, far-reaching and unprecedented changes in all aspects of society, the report warns.  On the other hand, the Environment Minister of India Harsh Vardhan responded to the findings of report by stating that New Delhi did not wait for any report to realize the threat posed by climate change and was making all efforts to combat global warming. Further, according to World Health Organization (WHO), “on account of the unique combination of India’s geography, diverse population characteristics and high carbon-related energy dependence, climate change is likely to have a greater impact on health in India”.

Scholars have attributed the Kerala floods of 2018 to human-induced factors such as climate change and destruction of the local ecology. It is argued that the destruction of ecology, particularly in the Western Ghats and other ecologically sensitive areas like the wetlands was not only responsible for precipitating the disaster,  climate change led to an unexpected rise in rainfall and contributed to the disaster as well. Floods in Northern India including flash flooding at Kedarnath and flood in northern Bihar and in Chennai, in the Southern part of India are argued to be results of climate change. Specifically, flash flood at Kedarnath which took a huge toll on human lives led Indians to discuss and talk about climate change argues Aditya Satpute of the Indian Institute of Foreign Trade. Some have observed that even while climate change will have significant impacts on the whole country, serious repercussions will be felt in mega cities, like Delhi-NCR and Mumbai, high mountains, small islands and particularly coastal regions as sea levels will rise.

Much ahead of the Paris climate agreement, underlining the need to address the issue of climate change and further the imperative of sustainable development, Prime Minister of India, Narendra Modi had released the first “National Action Plan on Climate Change” in 2008 outlining India’s existing and future policies and programs on climate mitigation and adaptation. India has also helped establish the International Solar Alliance (ISA) to focus on the development of solar technology at the international level. India has begun taking positive actions with its emphasis on generation of renewable power through its 100 GW solar mission and its total 175 GW renewables mission.

However, it must be noted that just two years prior to the agreement, 44 per cent of its energy basket was constituted by coal and renewables accounted for only 3 per cent according to a report of the US government’s Energy Information Administration. Further, a report released by the International Energy Agency, a Paris-based intergovernmental agency projected India to be the second largest energy consumer next to China before 2020. While Modi, prior to ratifying the Paris agreement, pledged to supply electricity to 18,000 energy poor villages by 2019 through a mix of fossil fuels and renewable sources, solar energy is likely to supply power around15 per cent of the villages and about 85 per cent would come from the central grid, which is still mostly fueled by coal argues Debajit Palit, an associate director at TERI, a nongovernmental organization specializing in development of renewable energy in India.

Considering its energy needs India preferred to pledge to enhance renewable power sources to agreeing to cap emissions. However, it has agreed to reduce emissions relative to GDP by roughly a third from 2005’s emissions by 2030. Nevertheless, it is argued that New Delhi has voluntarily set ambitious renewable energy targets while challenges ahead will be serious in terms of their technological and economic implications. The need to store renewable energy on a massive scale would require battery storage but high prices do not make it a viable option. As the Indian economy is urbanizing and transitioning toward swift transportation of human-beings as well as goods, reliance on hydro-carbons- propelled vehicles has increased and switching over to renewable energies has not been easy given lack of technological advancement. Promotion of electric vehicles and solar power for generation of electricity has not encouraged people to reduce their dependence on hydrocarbons as these have not been technologically advanced and effective.  However, India must turn rapid urbanization into an environmentally friendly exercise through energy efficient buildings and mass transportation systems.

American withdrawal from the Paris agreement might have negative implications for the developing countries as they would not only be deprived of much-needed financial and technological assistance from the US, they could excuse themselves even if they were lax on environmental issues.

While international cooperation is crucial to ensure that the world not only reaches its targets, it is time to even collectively work much harder than that considering the significance of the IPCC report. Further, there is need for a change in personal traits as demands and transformation at the individual level will both compel and induce the state to act. In this context, Debra Roberts said: “The energy we buy, we must be putting pressure on policymakers to make options available so that I can use renewable energy in my everyday life”.