The Trouble With Bangladesh’s Military

Bangladesh’s military is more concerned with profit and power than defending the country. 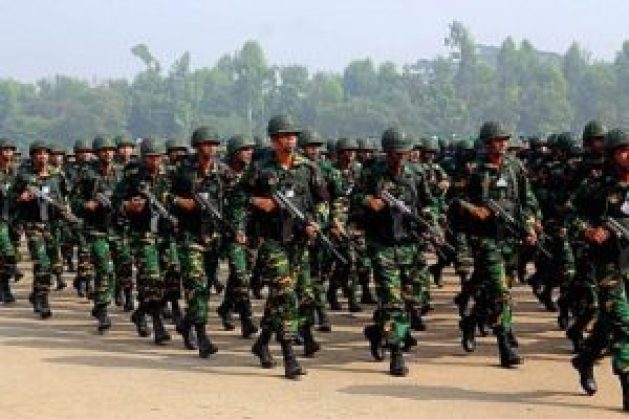 The armed forces account for 6 percent of Bangladesh’s annual budget, totaling $3.2 billion in the year 2017-2018, according to official statistics. Yet Bangladesh’s military has proved to be incapable of showing strength in the face of repeated violations of its land, sea, and airspace by neighboring Myanmar.

Bangladesh’s military has failed to restore public confidence that it can defend the country’s territorial sovereignty. If there is an overriding message from these debacles, it is that the military is ill-equipped to defend the state because it has been practically unaccountable since the very foundation of Bangladesh. Instead, the military has captured much of the bedrock of the state it is supposed to defend.

Enjoying this article? Click here to subscribe for full access. Just $5 a month.On September 15, 1991, a parliamentary system of government was proposed in the 12th Amendment Act, and a constitutional referendum ratified the institutional framework for parliamentary democracy in Bangladesh. Still, to date, even Bangladesh’s democratically elected civilian leaders have been forced to tread carefully around the military. Some current Bangladeshi politicians have a military background, and often discourage the government from engaging in military matters.

Many developing countries, even those with generally democratic governments, have very weak oversight of defense matters. Bangladesh is no different. For historical reasons, many believe that the military sector is a “no-go area” for civilian oversight. State security is often used as an excuse for secrecy, resulting in insufficient transparency in defense budgeting and procurement. The defense sector believes that they require special treatment compared to other public sectors since they deal with national security matters. The military itself discourages “interference” from parliament, or from the civilian government.

Further complicating things, Bangladesh’s armed forces also have a dual role as internal security forces. The Bangladesh military is repeatedly called on to prevent civil unrest. For example, the military intervened in 2007amid unrest when the two major political parties were battling over who would come to power.

In addition, the political involvement of the military in internal affairs makes it hard for the civil administration, such as the Ministry of Defense and parliament, to hold the the military accountable.

The Armed Forces Division (AFD) is the principal administrative organization by which military policy is formulated and executed. The Ministry of Defense (MoD) should exercise authority over the Armed Forces; however, it is far less potent than the AFD. Weak governance, civil authority, and lack of accountability make it difficult to see defense policies executed.

For example, the defense budget is not well planned and executed based on national security but rather is focused on a procurement list catered for Forces Goal 2030. As a result, Bangladesh military budgeting and expenditure processes fall short of international best practices.

Weak monitoring, controls, and audits facilitate corruption and waste. Sometimes the parliament, the auditor general of Bangladesh, and the anti-corruption watchdog are reluctant to investigate the military — or even actively prevented from doing so. Even in the absence of dishonesty, failure to implement due process often leads to purchases of high-cost items of questionable strategic purpose, severe delays, and cost overruns.

It has been well-documented by SIPRI that the international arms trade and, more specifically, arms procurement practices in Asia, Africa, and the Middle East are highly susceptible to waste and corruption. Bangladesh military’s off-budget spending is often contributed to the military’s business activities, rather than national defense.

Following the Pakistani military’s business model, Sena Kallyan Sangstha (SKS), a concern of the Bangladesh Army, operates a dairy farm and an ice cream factory. The BBC reveals that the Bangladeshi military has stakes in food, textile, jute, garment, electronic, real estate, automobile, shipbuilding, manufacturing, and travel businesses. The military also operates Trust Bank and the Ansar VDP Bank, and has a record of giving illicit loans from these institutions to top officers. According to the BBC investigation, the Bangladesh Army’s business interests further include power plants, roads, infrastructure, and bridge projects, amounting to billions of dollars of private assets.

In 2009, the Bangaldesh Rifles (BDR) mutiny “was partly fuelled by resentment among the BDR’s rank-and-file over the corruption of army officers engaged in the retail sale of consumer items,” BBC notes, citing Bangladesh’s official report on the incident.

Some leading Bangladeshi figures in the business sector have admitted that military-owned businesses are virtually indistinguishable from other commercial enterprises in the way they operate. The irony is that military business interests have thrived more under the civilian rule than under the martial law regime of General Hossain Mohammad Ershad.

However, as Bangladesh’s military ambitions develop, it’s past time for a debate about whether the military should engage in such business activities or instead concentrate on national security and protection of sovereignty.

Ryan Smith is a defense analyst based in Australia.