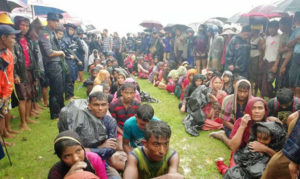 The world witnessed a massive refugee situation in the borderland of Bangladesh and Myanmar in 2017, where an extreme form of brutality perpetrated by the Myanmar security forces forced hundreds of thousands Rohingya people, known as the world’s most persecuted ethnic minority, fled to Bangladesh. Myanmar security forces, Burmese (Bamar) ethnic extremists and Rakhine Buddhist fundamentalists combinedly formed an alliance to perpetrate a deadly operation, called clearance operation, started from August 25, 2017, which, a recent report prepared by a three-member-panel appointed by the United Nations shows, compelled more than 725,000 Rohingyas to flee to Bangladesh, about 10,000 Rohingyas were killed in the first two months, hundreds of women and girls were raped, and around 392 villages were partially or totally destroyed. Combined with previous and new arrivals, now Bangladesh hosts about 1.3 million Rohingya refugees in Cox’s Bazar, its South-eastern part, which is considered as the world’s largest refugee camp. The newly arrived Rohingyas in Bangladesh explained their horrible experience and the degree of atrocities was so intense that the UN Human Rights council time and again termed it as “a textbook example of ethnic cleansing” whilst many others called it genocide.  Even before the massive campaign in 2017, some credible research like the ones published by Yale Law School and the research team of Queen Marry at the University of London found that the way Myanmar security forces were dealing with the Rohingya people is undoubtedly a genocide. The campaign in 2017 seemingly superseded all previous records. Even after such a massive Rohingya influx and despite all out criticisms across the world, the remaining Rohingyas in Arakan still face an acute sense of vulnerability and are consigned to a life of fear. Notwithstanding the prevailing contested situation, Bangladesh and Myanmar made an attempt to start off repatriation process from mid-November, but expectedly failed. Many international actors, rights bodies and even many local people have “doubt” whether the start of repatriation process means really a “start” or an “end”! Will it really bring any lasting solution without addressing the strong Muslim-Buddhist divide, Rakhine-Rohingya ethnic cleavage, state’s exclusionary policy, and the question of legality of the Rohingya people in Myanmar’s state structure? Many policy analysts, political scientists, academic researchers, and career diplomats might come up with an imagined or intelligent prescription suggesting many potential bilateral and multi-lateral engagements and actions, but I intend to unfold here the ways how the Rohingya refugees, the center-point of the entire discussions, want the solution of their problems in which ways.

On September 12, 2018, I was interviewing a group of Rohingya refugees together, which is academically called Focused Group Discussion or FGD, in Balukhali refugee camp in Ukhia, Cox’s Bazar where three majhi (block-chief), two aged murubbi (superior), three middle-aged Rohingyas were present and took part in the discussion. Everyone wants to go back to Borma [Burma] but everyone echoes the same narratives: joboner nirapotta (life-safety), nagorikottto (citizenship) and maan-ijjat (dignity) should be insured first. I recorded hundreds of similar stories from many Rohingya men and women living in Ukhia and Teknaf refugee camps. Some, of course, demand an active involvement of the UN bodies like UNHCR in the repatriation process. If we deeply look into the contents of the Rohingya narratives, we can find the solutions to the Rohingya crisis by confirming three demands: legal recognition, life-safety, and human dignity.

The Rohingya people, whose ancestors were living in the Arakan state centuries ago, were deprived of citizenship in the process of adopting Myanmar Citizenship Law in 1982 which legally rendered them stateless people. Since citizenship is the gateway to all sorts of rights, conferring citizenships to the Rohingya people could be the best possible way forward towards resolving the crisis. My fieldwork experience reveals that the Rohingya people believe if they get legal recognition with the citizenship, they can enjoy all kinds of social, political and civil rights like other citizens of Myanmar. That is what they desperately want as they believe legal recognition could bring a positive change to alter their position in Myanmar.

Many Rohingya refugees whom I met explained that besides conferring citizenship, ensuring life-safety is also important. “If we have citizenship, but no life-safely, what the hell we will do with the legal recognition”—is the sentiment among many Rohingya refugees in the camp. When security forces, and local Buddhist extremists visit Rohingya houses in the village in search of “militants”, they badly behave with the Rohingya people. If they see any form of protest, they physically assault and sometime just shoot on the spot. Even in the market place, on the street, in the public transport, and even in the mosque, the security forces and local Rakhine extremist youths without any reason harass the Rohingya people. If anyone argues and challenges their acts, they start beating publicly, attack with knives & sticks, and sometime shoot on the spot. Their behavior for decades has created a culture of fear in every sphere of Rohingya life in Rakhine state. Therefore, along with the legal recognition, Rohingya refugees in Cox’s Bazar think, social and life safety must be ensured.

Many Rohingya refugees during my fieldwork in 2017 and 2018 time and again told me that “the Borma military and kichu moiggar fua [some Rakhine youths] quite often harass us at home and outside without any reasons. Their behavior has made us understand that we can’t live there and we are illegal in Myanmar. Sometime, it hurts us deeply as it heats to our self-respect. They behave with us like a januar [animals] not like a manush [human]. We want to lead a human life.” I found the similar sensitivity among many Rohingya refugees who crossed the border following the August campaign. According to their narratives, security forces often raid their houses and not only to harass them but also, they snatch their belongings, saved money, and gold. Sometime they forcibly rape girls and women putting males at home on gun-point. The movement of Rohingya people is still restricted, their freedom of choice is completely absent and there is no liberty to lead a human life. Rohingya people cannot move beyond three kilometers without permission and hence they live in a confinement situation. They need permission to do everything and even to do marriage. Therefore, they think, along with the legal recognition, and life-safety, their human dignity is equally important because they want to lead a normal human life.

Many politicians and diplomates, local and global media, UN bodies, Human Rights Organizations, global political actors, NGOs, academics, and civil society forums talk too much about Rohingya crisis and give various forms of prescription. What actually the Rohingya refugees want and what their views of the solutions to the Rohingya crisis remain unheard. Based on my field-level experience and long-year engagement with them, I have picked up “three points” as an abridged version of what the Rohingya people think of getting rid of their miseries. Now, the question is: Who will rail the derailed train?