The Saga of Ahmadi Muslims in Pakistan

The state of Pakistan was formed to protect the economic and religious rights of minorities. However, Pakistan eventually hit the worst record of human rights violations particularly against the Ahmadiyya Muslim Community (AMC) that has been forcibly declared as non-Muslims by the Pakistan Assembly in 1974. Despite Pakistan crushing the rights of the Ahmadis in Pakistan, it managed to win the seat at the United Nations Human Rights Council. When we scroll the reminiscent pages of the history of Pakistan, we come to know the immense contribution of Ahmadi Muslims towards Pakistan. Currently, and ironically, Ahmadis are victims of persecution in Pakistan because of their faith. It won’t be out of place here to fleetingly mention some of the unsung personalities from Ahmadi community whose contributions towards Pakistan were nothing but gigantic. 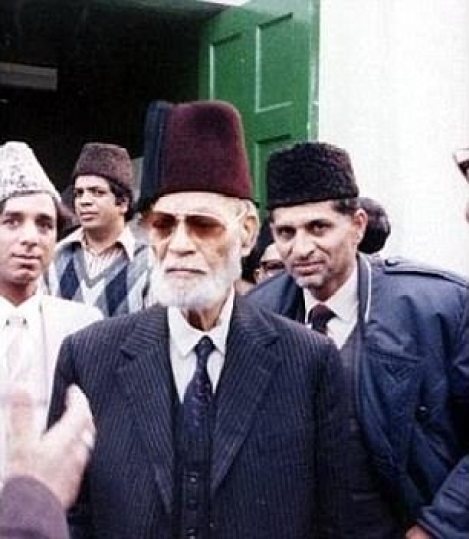 Muhammad Zafarullah Khan was the first Foreign Minister of Pakistan a prominent member of the Ahmadiyya. Image credit: Daily Mail

Not only men, but Ahmadi women have also done their part too. Saira Waseem, a United Stated based Pakistani Ahmadi Muslim artist won countless hearts around the world by her remarkable Persian-Mughal elegance to represent power, politics and Kashmir dispute. Similarly, Sitara Brooj Akbar, a Pakistan Ahmadi Muslim girl at the age of eleven set a world record by passing O Level in five subjects.

That said, there has been a continuous effort from the state as well as non-state actors to malign Ahmadis as heretics, and no moment has been spared to make them a collective social and political pariah. Not only this, the preachers, enjoying complete insulation from the state, spew venom in their speeches and don’t shy away from calling for a genocide of Ahmadis.
Ahmadis Genocide

In the year 2014, Mehdi Ali, the United States based Ahmadi Muslim, by profession a heart surgeon, was shot dead by a gunman riding a motorbike in front of his wife and son. Recently, a lawyer, his wife, and his son were killed by an unidentified gunman; all killed belonged to the AMC. A few days before, a Pakistani court sentenced to death three Ahmadi Muslims for alleged blasphemy.
Why persecution?

It is quite easy in Pakistan to kill the helpless minority because most of the Pakistani people have been systematically misguided and taught hating Ahmadi Muslims. The persecution of Ahmadi Muslims is based on the false allegations that Hadhrat Mirza Ghulam Ahmad (founder of AMC), God forbid, profusely insulted the Prophet Muhammad (PBUH) and changed the Muslim creed. The mainstream Muslim community not only segregated themselves from Ahmadi Muslims but alleged that Ahmadis are British agents and enemies of Islam. The reason put forth is that the founder of AMC praised British government because the British Indian government provided religious freedom to all the people in Indian sub-continent. The persecuted minority is labeled as anti-national which is a false allegation on Ahmadis in Pakistan that is why few politicians and religious leaders urged the Pakistan government to expel the army officers who belonged to AMC.

Future of Ahmadis in Pakistan

Captain Safdar explicitly stated in Pakistan Assembly that Ahmadi Muslims are a threat to Pakistan security because the persecuted minority has nothing do with Jihad. He further stated that AMC is against Islam because the minority community has challenged the finality of the prophethood. Furthermore, he suggested Pakistan government rename the physics center again after Prime Minister House ordered to rename the National Centre for Physics at Quaid-e-Azam University to Professor Abdus Salam Centre for Physics in 2016. Not only captain Safdar but various religious groups are of the same view to refrain from acknowledging Ahmadi Muslims in Pakistan.

Nevertheless, all over the world, even Pakistani people have rejected the statement of Captain Safdar against the persecuted minority. Also, the U.S. Commission on International Religious Freedom condemns the death sentence for Ahmadi Muslims which was recently passed by a Pakistani court on the blasphemy charges. It is also held that the current Pakistani government tried to alter the oath that is required for Pakistani people to take to get a passport or for contesting an election. The oath was altered from “I solemnly declare” to “I believe.” It is interesting to note that before voting or contesting for an election in Pakistan, one has to sign the form where it is written that “I hereby solemnly declare that I consider Mirza Ghulam Ahmad Qadiani to be an impostor Nabi (Prophet) and also consider his followers, whether belonging to the Lahori or Qadiani group, to be non-Muslims.” However, there was strong criticism from the general public that the current government is going to accept Ahmadis as first-class citizens. Without losing much public support, the dysfunctional government, later on, claimed that it was a minor clerical mistake.
Despite Pakistan having a bad record against the minorities, it still won the UN Human Rights seat. This is simply unjust towards the persecuted minority by the International Watch Dog (United Nations) which must not be ignorant about the ground realities in Pakistan. The Pakistan highlighted the human rights violations in Kashmir in the United Nations and had loudly spoken about the Rohingya Muslims genocide in Myanmar, which in itself is good, but it is silent about its draconian laws against the persecuted minority. There are more than fifty Ahmadi Muslims who are implicated under the blasphemy law PPC 295-B in Pakistan.

I am worried because of the growing ignorance among the misguided people in Pakistan who always take law in their hands after attending the anti-Ahmadi events, and can get away with any criminality due to state complicity. Recently, Maulana Fazl-ur-Rehman, Pakistani politician and leader of Jamiat Ulema-e-Islam (F) led the conference in Rabwah against the Ahmadi Muslims. Rabwah is a town in the province of Punjab, Pakistan where the majority of Ahmadi Muslims are living.

In spite of the persecution, Ahmadi Muslims are loyal towards Pakistan. No one can deny the fact that Ahmadi Muslims never resisted against the government even though Ahmadi Muslims were killed ruthlessly, arrested on false charges, students were expelled from the universities, and medical colleges, their property damaged by the angry mobs and religious scholars issued Fatwa that all the dealings with Ahmadi Muslims are illegal.

What proof do Captain Safdar and others demand from the AMC to declare themselves nationalists and peaceful community in Pakistan? Sooner or later, Pakistan will realize that it did a big slip-up in 1974 by declaring Ahmadis as non-Muslims. All over the world, AMC is praised for the peaceful programmes like Peace Symposiums organized in almost all states to inform the people about the serious conflicts and their solution. In states like the United Kingdom, the United States, Canada, Australia, and India, AMC is acknowledged for their welfare programmes and their loyalties towards the state. Proudly, the heads of the respective states even praised the AMC for their peace activities across the globe. Recently, the current spiritual head of the AMC, Hadhrat Mirza Masroor Ahmad was honored as the second most influential person after the Queen in the United Kingdom in a social pillar of faith for the year 2017.

Nevertheless, several Pakistani non-Ahmadi academic scholars have stated that by declaring Ahmadis as non-Muslims by Pakistan Assembly was among the big mistakes done by Pakistan in the past.