The rise of Islamism in Bangladesh 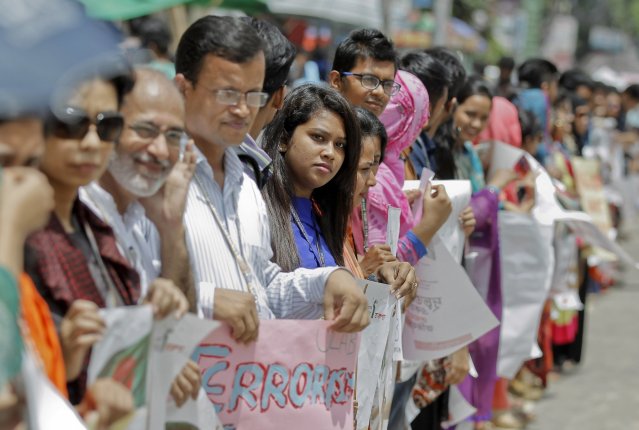 Islamism in Bangladesh is rising precipitously. It is permeating every aspect of life and has taken root as much in urban centers as in rural communities. Everywhere – from modern business office to daily social life – Islamic codes tend to exert authority. Burqa and hijab-wearing women who vow to uphold such a system are numerous, and so are men with Islamic zeal. Two decades ago, most Bangladeshis would have considered such behaviors ludicrous.

Should this new trend be a matter of concern? It is somewhat reassuring for those who have embraced the new codes. For them, it is a natural evolution in a country where 91% of the 165million people are Muslim and where Islam is the state religion. Islamism offers them organizing principles for building a moral community, which to them was elusive in the past.

But it is worrying to them who want to live in a liberal Bengali society. Among them are also the religious minorities whose size is shrinking every year. Their hope to curb religious influence from society seems dashed. They feel threatened, and the threat is real. For, over the past years the Islamists have unleashed violence against them by killing writers and cultural activists, damaging statues in public squares, and setting off bombs at cultural gatherings. To their dismay, the Islamists now dictate what social and cultural norms should be. Even the westerners, who once praised Bangladesh as a country of moderate Islam, became wary after the deadly terrorist attack against Western citizens in a restaurant in Dhaka in 2016.

Why has the trend reversed at a time when the world looks at Bangladesh as an example of development success? People in this overpopulated country are much better off now than two decades ago: Between 2000 and 2015, GDP per capita increased nearly two times to $3,100 (PPP), life expectancy from 65 years to 72 years, adult literacy rate from 48% to 62%, and the percentage of urban population from 24% to 34%. They are better connected locally and globally through the Internet and TV networks. Most of them can afford to own a cell phone, whereas two decades ago the phone was a privilege of a few. All this progress should have inspired them to adopt a more liberal worldview. Instead, they are resorting to fanaticism.

The recent global resurgence of religion may have induced this drift. Since in the west as in Asia, religion has regained its traction in the political domain. The ascendancy is so pervasive that it easily shrouds its fundamentalist bearings. As a result, faith leaders have found their importance and project themselves as equal to political leaders. Their opinions now matter as much in local as in global politics. So much so that when multilateral agencies like the United Nations fail to influence world leaders, as they have about climate change, they turn to the Pope.

This global resurgence influences Bangladeshi society through at least three internal factors. The one that takes the most blame is the downgrading of secularism. Although the country’s constitution has restored its original principle of secularism, it has accorded Islam the status of state religion. This action has not led to instituting Islamic law but has given the state a role in promoting Islamic values. Ironically, it is often overlooked that this role predates the downgrading of secularism. In the short few years, when secularism was an uncontested principle in the constitution, the country joined the Organization for Islamic Cooperation (OIC), gave the Islamic Foundation the status of a government agency, and created a national mosque. Religious education and teaching of Arabic were part of the public school curricula; madrasahs received allocations from the national budget. All these created some impacts on societal values. The post-secular state capitalized on them to create conditions in favor of the growth of Islamic institutions.

Political opportunism aside, there is little appetite left in the country to debate over secularism. It is doubtful that a mere principle could bring about meaningful change unless it can influence governance. As proof, one could look at the constitution’s another principle – socialism. For the whole time, it has been in the constitution without having any influence on the country’s economic or social policies; no one has ever demanded that it should.

The debate over secularism has also dissipated because it has failed to become a defining factor in cultural identity. Whenever the nation faces the question of identity, all political forces ride on religion. This flagrant abuse of religious identity is the second most crucial factor that is giving rise to Islamism.

The modern culture that has evolved since the 1970s has failed to counter it. Although this culture has aimed to construct a secular identity, its elitist and urban bent has detached itself from the masses who strive hard to gain access to education and economic opportunities. It has stood a firm footing on rich cultural heritage, such as Bengali New Year, Language Day, and Tagore songs. Nonetheless, instead of advancing ideals of an inclusive society and culture, it has contributed to cultural gaps. Consequently, it has compelled the lower classes in urban and rural areas toward a non-exclusionary Muslim identity.

Increased economic opportunities should have narrowed the gap, but it has widened it. This has to do with the nature of the opportunities, which is the third contributing factor in the rise of Islamism. The two primary economic drivers of the country are garment exports and remittances from the Middle East. The garment sector not only has caused large-scale migration of rural women to Dhaka but via employment also connected the three million poor, uneducated and unskilled female workers with western markets. The sector thrives on the unprecedented exploitation of the female workers but still provides them an income to pull their families in the villages out of desperate poverty. However, the meager incomes with which they can afford to live in the slums of Dhaka do not let them take part in the city’s social or cultural life.

In parallel to this female in-migration, a large number of men have migrated to the Middle East as casual workers. The prime destinations of the eight million migrant workers are Saudi Arabia and the U.A.E, which also account for 60% of the $13 billion annual remittances that Bangladesh receives. These workers, too, are uneducated, unskilled, and exploited. Nonetheless, the remittances they send have moved their families up the ladder of the rural economic structure.

Despite their role in driving economic growth, these two groups have not become a part of the urban-based middle-class culture; Therefore, in their quest for a cultural force that would give expression to their new feeling of self-esteem and freedom, they have unwittingly turned to their religious identity. It is easy for them – especially for the families of the migrant workers who brought along with them many Middle Eastern cultural practices – to symbolize this identity. Their size and relative prosperity have easily persuaded others in their ranks to follow their path.

This is what the Islamists had been waiting for to expand their sphere of influence. In addition to their open and clandestine politics, they have already immensely expanded their networks in economic and cultural domains. They have invested in banks and financial services, health care, and the pharmaceutical industry. In cities, they have built schools that compete with the English-medium schools for wealthy families; in rural communities, they have built residential madrasahs to offer free Islamic education to needy children. They use the Internet and the cell phone to their advantage and connect their networks from one part of the country to another. Their efforts receive a boost from donations from the Arab world. As The Economist magazine reports, Saudi Arabia alone has promised $1bn to build 560 mosques – one in each Bangladeshi town – in addition to the existing 300, 000 built with local resources. Mosques now take the place of the venues for traditional cultural activities.

Indeed, it would be hard to find a cultural center in any towns in Bangladesh, let alone in villages. While mosques and madrasahs have mushroomed, the social clubs that young activists built in the 1960s and 1970s have sunk one by one. The upper class, which once patronized those clubs, now feels safer in mosques as they want to downplay their western way of life. Had this class been a little less hypocritical, secular culture would have had a better chance to stand its ground. Contrary to expectations, a large number of educated urban youth fervently emulate them because their education prepares them for anything but a critical mind to question their parents’ beliefs.

Sadly, the media, too, has swung to their side. Newspapers and televisions have taken part in Islamizing the Bengali language, replacing many native and Persian words with Arabic words. For them, it is a better business strategy to give the audience what they want rather than what they need to engage themselves in critical thinking. Accordingly, they give more space to the preaching by unlettered mullahs – an act that would have been considered abominable three decades ago.

Religious fanaticism helps with anything but moving society forward. Bewildered by many recent economic and technological changes, Bangladeshis seem to be losing sight of this inescapable truth. They see the underlying tension between secular and religious values, but they react to it only sporadically and ineffectively. The problem lies in the fact that despite their long tradition of organizing political resistance, they have little experience participating in citizenship building for a fair society. It is time that the liberal forces, which are increasingly intimidated by the domination of Islamism, embarked on creating an opportunity for this. Instead of shifting all the blames on political opportunism, they should curtail their elitism and create opportunities engaging all in asking this simple question: What kind of society do we want to be? It is easier said than done, but it is also a positive path forward toward collective consciousness for rebuilding a secular Bangladesh.