The Curious Courtship of Barack Obama and Narendra Modi 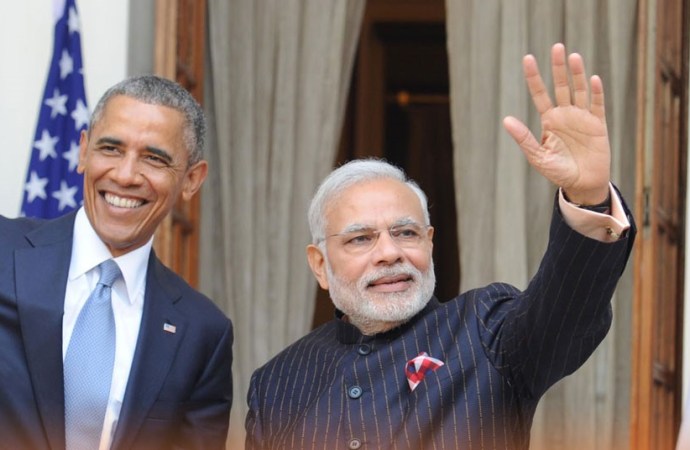 Why have two very different leaders struck up such a close bond?

Why have two very different leaders struck up such a close bond?

Several months after U.S. President Barack Obama’s trip to India, one question still lingers: Why did he and his host, Indian Prime Minister Narendra Modi, get along so well?

The memories of this bonhomie still resonate: the bear hug, the warm body language, and the informality of speech (recall how Modi repeatedly referred to Obama as “Barack” during their joint radio address).

And yet these are two leaders that, at first glance, appear to be polar opposites. One was raised as a liberal progressive; the other is a conservative brought up under the heavy influence of the RSS, a far-right organization. One grew up a global nomad, living in several different countries; the other remained parochial to the core, rarely—if at all—venturing away from his home country. One embraced academia early in his professional career (and unsurprisingly later became an admirer of India’s wonkish former prime minister Manmohan Singh); the other has eschewed it completely.

To be sure, opposites may attract. Yet they also repel—and particularly, such as in the case of Obama and Modi, when there are so many opposing poles. This makes the goodwill between the two men all the more remarkable.

Two additional factors make the Obama-Modi friendship surprising. One is Obama’s aloofness; the president tends to open up to only a small group of close advisers. Obama (unlike his folksy predecessor George W. Bush, who famously spoke of “seeing into Vladimir Putin’s soul”) is not known for buddying up with foreign leaders.

The other factor is the visa ban that effectively barred Modi from entering the United States from 2005 until he became premier nearly a decade later. Admittedly, this ban—Washington’s response to allegations about Modi’s role in the deadly anti-Muslim Gujarat riots in 2002—was put in place by the Bush administration. However, the Obama administration, which took office in early 2009, continued to support it. Back in 2012, a State Department official said “our position on the visa issue hasn’t changed at all.”

In effect, two men with very different backgrounds—and who had never met until Modi visited the United States last September—struck up a warm bond in January. One of these men is not known for striking up warm bonds with many people at all—and his government had effectively banned the other man from visiting his country.

So what gives? Three explanations are in order.

First, some of the differences have been bridged, if not eliminated altogether. Immediately after Modi’s 2014 election victory was announced, Obama called Modi to invite him to visit Washington. Clearly, Obama was willing to move on from the ugliness of the visa ban-marred past. And by accepting Obama’s invitation, Modi indicated that he was as well.

Additionally, while Modi will never be identified as a liberal Democrat in the Obama mold, he has moderated his politics in recent years, and distances himself from the more hardline views articulated by some other members of his BJP party and by the RSS.

Second, there may well have been a strategic element—and some theatrics—at play when Obama and Modi made a show of getting along so well. Perhaps Modi wanted to make a powerful statement about India’s rising clout on the world stage. What better way to telegraph this message than by enveloping the chief of the world’s sole superpower in a deep embrace—and by showing that he is on a first-name basis with arguably the most powerful leader in the world?

As for Obama, what better way to signify his commitment to strengthening the U.S.-India relationship—one that drifted during the early years of his presidency—than by channeling warmth and trust in his public interactions with Modi?

The third and most important explanation for the sudden Obama-Modi friendship is that there is, in fact, much more in common between these two men than meets the eye.

Both come from modest backgrounds. Both rose to the absolute pinnacle of political power without the benefit of dynastic pasts—à la the Bushes or Gandhis. Both faced very large odds in becoming president and prime minister, given that one is an African-American and the other a member of a lower caste (this may help explain why, when the two met in Washington last year, they spoke about how they both came to power as outsiders). They also revere the same types of heroes—ones like Martin Luther King Jr. and Mahatma Gandhi known for preaching civil disobedience to achieve justice. To that end, the White House’s idea to have Obama take Modi to see the MLK Memorial in Washington last September was a master stroke.

Perhaps the most vivid indication of the similarities and convergences between Obama and Modi is how they have run their national election campaigns. The Modi Effect, a revealing new book by the British journalist Lance Price about Modi’s 2014 campaign, captures just how strongly Modi was influenced by Obama’s campaign style and tactics (and also by those of Bill Clinton—tellingly, according to Price, when Modi visited the United States last year, he met with Bill and Hillary Clinton—and “discussed how to fight a successful election”).

Price writes that Obama and Modi have discussed their shared passion for technology, and both have aggressively deployed this medium on the campaign trail. Modi’s heavy use of social media, for example, was reminiscent of Obama’s similar efforts in his two presidential election campaigns. One can also discern the Obama influence in Modi’s sloganeering. A phrase translated as “Good Days are Coming” was heard frequently on the campaign trail last year, and it was the title of the BJP’s campaign song. This slogan conjures up the heady optimism of Obama’s anthemic “Yes We Can” (not to mention Bill Clinton’s “Don’t Stop Thinking About Tomorrow,” or even Ronald Reagan’s “It’s Morning in America”).

Another manifestation of Obama’s influence on Modi’s campaign lies in old-fashioned get-out-the-vote tactics. BJP workers fanned across neighborhoods in India’s biggest cities to knock on doors and ask people, face-to-face, for their support. It was a very Obama-esque tactic, Price writes, and it had never been attempted on such a large scale in India.

Even Modi’s campaign “war rooms” were directly influenced by Obama’s. One Modi campaign official, who was in charge of the war room in Mumbai (India’s largest city), described to Price how he tried to replicate Obama’s methods:

The BJP is a core network organization and we have 89,000 booth-in-charges. Earlier we used to have only one-way communication with them. If we look at the Obama campaign, they collected a lot of feedback from the field and adjusted the campaign accordingly. So we tried to do that here. Secondly, we learned about using technology to effectively communicate with the network in the quickest manner—emails, WhatsApp, social media; all of them helped big time.

Little wonder, then, that Modi even turned to Americans to help his campaign. One top campaign official asked a group of American polling experts to commission a huge survey—featuring nearly 130,000 respondents—of Indian public opinion. Additionally, in October 2013, Modi lay down the first stone of a new statue of Sardar Patel—an Indian independence-era figure who, like Modi, was a Hindu nationalist Gujarati. Modi sought to incorporate this project into his campaign by launching a nationwide appeal for contributions of iron to construct the statue (which Modi boasts will one day soar to 600 feet). The statue’s designer is an American digital artist.

Setting aside these campaign-related and other similarities between the two men, there is one image that encapsulates the essence of the relationship between Obama and Modi. It is an undated and rather odd photograph of Modi that has appeared on Indian news sites. In the photo, Modi is sitting outside in some unknown location, his back against a tree, and dressed uncharacteristically casually in a sweatshirt, slacks, and sneakers. He is reading a newspaper. A cup of tea and an open laptop sit nearby. Several white ducks waddle along to his right. And to his left, lying open with the front cover facing up, is a copy of what appears to be one of Obama’s authored books.

Modi does not relax very often, and he also reportedly does not read many books. How revealing, then, that Obama would be on his mind—and on his reading list—when he takes advantage of such rare moments.

Ultimately, Obama and Modi will never be best friends. However, there is undoubtedly a repository of goodwill large enough to sustain an amicable partnership. This bodes well for U.S.-India relations on the whole—at least for the time Obama is still in offices.