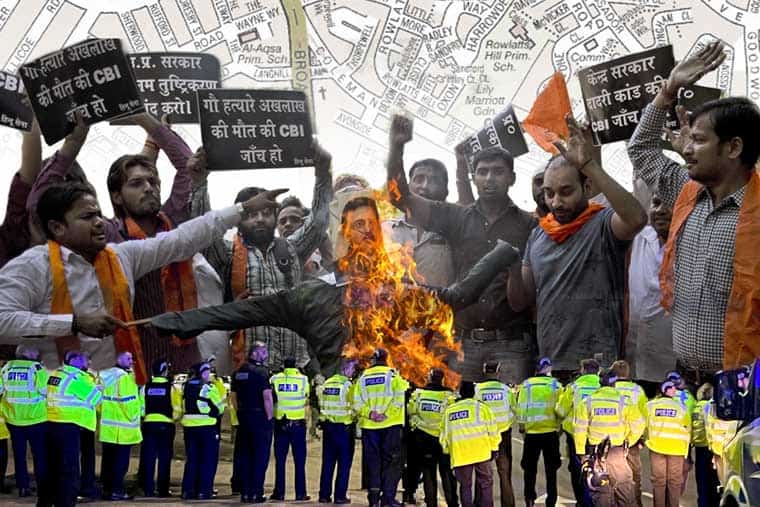 There is no denying Indo-Pak enmity still prevails at various levels and their cricket matches are seen by certain sections as virtually equivalent to a war between two countries. Communal tension in Leicester (United Kingdom), as reports indicate, began with a cricket match between India and Pakistan on August 28. The match was held in Dubai (UAE). But this was not the first time that Indo-Pak cricket match was held. Leicester has, however, been subject to communal violence apparently because of it for the first time. The cricket match was watched in most parts of world, including Indian sub-continent, without communal tension surfacing as has happened in Leicester.

Given that recent history of UK has not witnessed communal tension of this nature on its own soil, one is prompted to raise questions as to who has failed, where? Certainly, several arrests have been made but then till latest developments indicate, tension still prevails. What also seems unnerving is that disturbance which seems to have begun because of bilateral relations between two countries took little time in being projected as communal tension between Hindus and Muslims. Attempts have also made been to link this with minorities being targeted by right-winged extremists and other communal incidents taking place in India. Irrespective of whatever is happening in India, how can these be linked with failure of concerned authorities to check disturbances in United Kingdom? Hardly a day passes by when some part of India is not subject to some social problem. In fact, probability of many cases going unreported, even unnoticed, cannot be ignored.

If the cricket match had taken place in Leicester or any part of UK, to a degree, the failure to control aggressiveness displayed by groups of people would have been understood. But, sections of people were aroused to taking part in activities leading to disturbance in Leicester after having probably watched the match in their own homes. There is a view that role of social media in circulating “false” messages, “misinformation” and so forth is also responsible for leading to communal tension. This cannot be denied nor can it be ignored. What perhaps need equivalent attention are reports of people from Birmingham having also entered Leicester further fuelling communal tension. Some arrested persons are reportedly from Birmingham.

Shocked at these disturbances in Leicester, City Mayor Sir Peter Soulsby said that he was “baffled” by such violence. Leicester was normally peaceful, with there being good relations between people of different faiths. He also expressed hope that situation would be normal soon. Taking note of role played by social media, he said, “I’ve seen quite a selection of the social media stuff which is very, very, very distorting now and some of it just completely lying about what had been happening between different communities.” In addition, he pointed out, “There’s no obvious local cause for this all.” Deliberate efforts were made to bring people from Birmingham to raise “tensions” in a “very peaceful city,” according to the mayor.

Paradoxically, several aspects of tension do not seem to have been paid much attention and demand explanation. One is of course as mentioned earlier, the attempt made to hold extremist elements and communal tension in India as responsible for what Leicester has been subject to. Equally inappropriate is the labelling of two religious communities – Hindus and Muslims- as responsible for this tension. Of course, several community leaders of these groups are reportedly making efforts to assert that they have been living there in communal harmony and peace as “brothers and sisters” for around half a century. They have issued statements calling for “peace” and condemned “violence” which they say is “not acceptable” by their faiths.

Why should what a few communal elements tried disturbing in Leicester be linked with these two religions as well as all Hindus and Muslims? It is imperative to draw a line when any disturbing incident and/or element tries doing so in the guise of some religion or other. Accepting and/or projecting disturbance with religious overtones used by criminals indulging in communal activities amounts to supporting them by indirectly/directly using religious jargons probably being deliberately used by them. This is nothing short of abusing religions.

Paradoxically, little importance has been given to national identity of communal elements. Why? Possibility of all participants being British citizens cannot be ignored. This point is being specifically made in context of importance accorded to their religious identity as well as tension having boiled over a cricket match between apparently countries of their origin. Chances of Indians and/or Pakistanis having indulged in such violence during their tour of Leicester and/or while visiting UK for some other purpose may be viewed as practically nil. Efforts have also been made to trace regional sources of social media, including communal tweets. Of course, investigation at various levels necessitates these moves.

Undeniably, the probable role played by extremist elements from outside UK cannot be ignored. But it is for their respective governments to pay greater attention to what’s happening in their terrain. Besides, the hard reality of British citizens being moved to this stage needs to be paid at least some attention. The ones arrested and charged with spreading communal violence and hatred will be punished as per dictates of British law, not as Hindus and Muslims. Even if British identity of communal elements has been deliberately pushed to backburner, chances of their escaping tentacles of British law are slim. When authorities- whether politicians, diplomats, leaders or those from police, media and others – exercise little caution in deliberate or unintentional use of religious terms while taking note of situation in Leicester, sadly they are falling victim to trap laid by which ever elements are responsible for initiating this phase of communal tension. This was and is apparently their plan, “convince” all about their “religious” agenda by use of “religious” labels they desire. What has happened is regrettable. Equally regrettable is little attention being paid to British society in Leicester being disturbed by some British citizens’ participation in communal violence. British citizens and not Indians or others should be blamed for communal violence in Leicester!