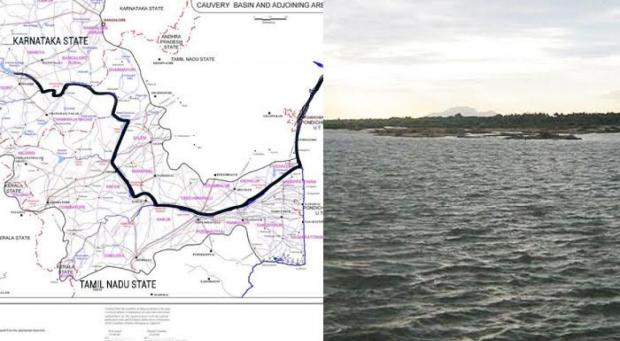 Now, Tamil Nadu is facing an awkward and embarrassing situation,  as millions of cusecs of Cauvery water is now being let into the sea due to want of storage capacity.

This is not the first time in recent years that such awkward and unacceptable situation has arisen in Tamil Nadu.

It has repeatedly been seen in the past that in a bountiful monsoon year,  around 170 tmc of water was being let into the sea.

Obviously, Tamil Nadu government has not learnt any lessons from past experience to avoid such situation , which obviously highlights the fact that the governance of water resources in the state has been extremely poor and those in charge of governance in the last few decades have shown shocking level of lack of commitment to the highest principles of water management.

While thousands of cusecs of valuable Cauvery water is now being drained into the sea, Tamil Nadu has seen vigorous and violent protests due to water shortage in the last three years due to drought conditions in the delta region. Neighbouring  Karnataka state was accused of not providing adequate water to Tamil Nadu, and the politicians and farmers associations organized several violent protests and demonstrations.

A  strange situation is now being seen in Tamil Nadu that the politicians, fringe groups and farmers’ representatives who were in the forefront protesting due to water shortage during the last three years are now maintaining deafening silence about the water going into the sea.

Tamil Nadu has to conserve the water available during the bountiful monsoon period and use it in the drought period.

These are all aspects which are well known but the lack of will of the government and the politicians in power to govern with responsible foresight, competence and commitment is the core issue.

It is not that the knowledgeable people in the state have not provided suggestions to the government about building storage capacities for water and conserving the water resources. Several governments in Tamil Nadu have promised to implement such appropriate steps, but nothing worthwhile has happened.

Governments in the past in Tamil Nadu have committed themselves to implement the several projects to interlink the rivers in the state and construct check dams to conserve the water, as given below.

* Two thousand cubic feet per second is sought to be transferred

The Tamil Nadu government announced a decade or so back, the above schemes as priority projects, and an investment of around Rs.9015 Cr. was envisaged.  As Tamil Nadu now lost valuable time due to the nonimplementation of the above schemes, at present, the cost could have escalated to around Rs.20,000 cr.

Certainly, an efficient government can implement such meaningful projects in stages over a period of four to five years.  The cost of implementing the projects would only be spread to over four to five years, and such fund requirement can be well met.

The implementation of the above schemes would go a long way in conserving the water during the monsoon period and use it during the drought season, to prevent the recurrence of the practice of letting surplus water into the sea during the bountiful monsoon period.

Apart from the above schemes, Tamil Nadu is endowed with a large number of lakes and reservoirs and waterways where substantial storage capacity has been lost due to lack of desilting operations over several years. Even suggestions made by the writer to the government to convert the desilting operations into a people’s movement have not even been acknowledged.

Such suggestions and proposals can be useful, only if there would be a government committed to the cause of quality governance of water resources.

It appears that it is more than likely that in case of the monsoon failure happening in the next year, Tamil Nadu would once again suffer from severe water shortage and consequent loss of crops, with storage dams and waterways remaining almost dry.

No strong protests have been made about such dismal scenario in Tamil Nadu, as both the ruling party and the main opposition party, which have been in power alternately, are responsible for such conditions.