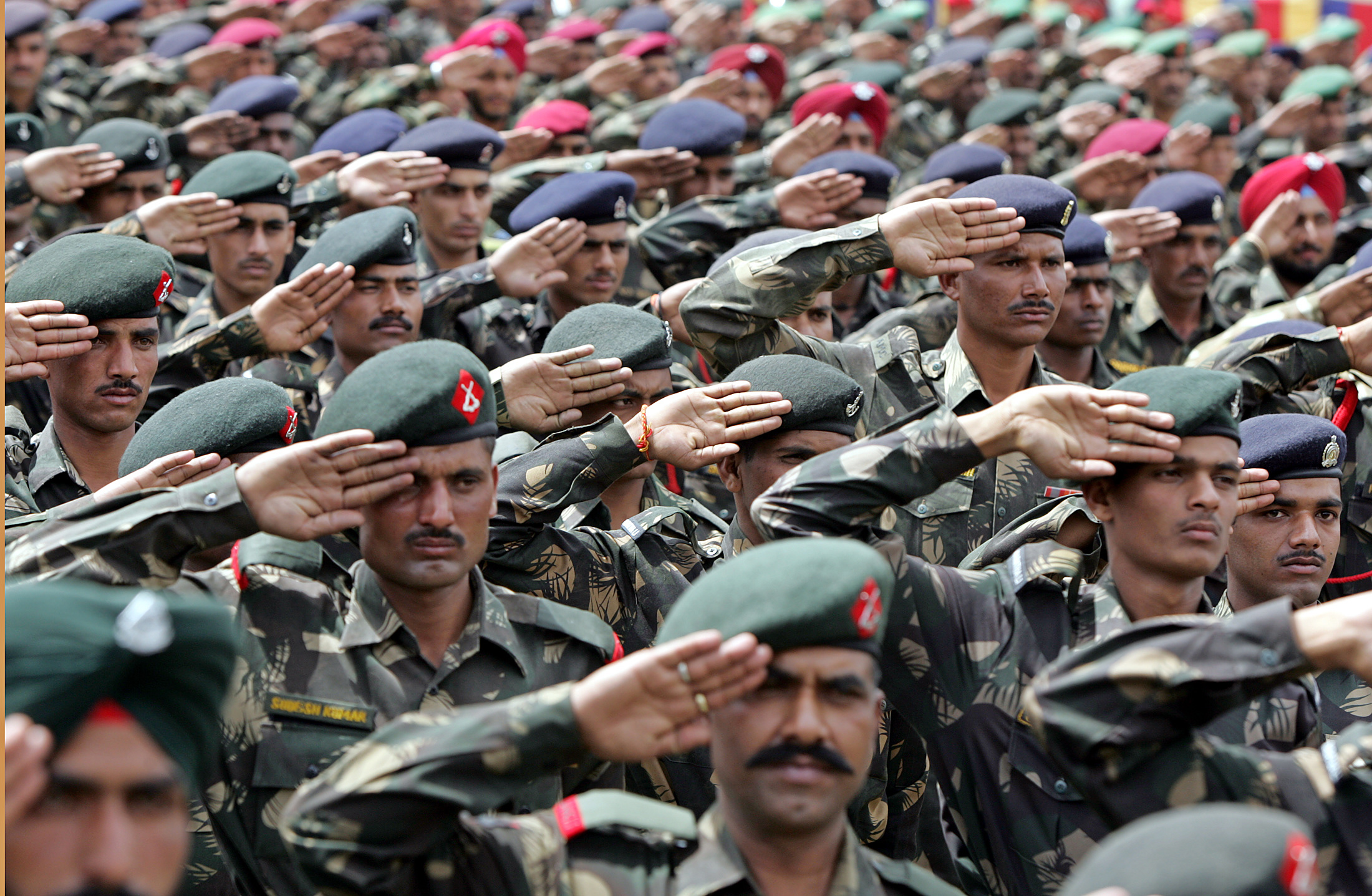 A country’s conception of security may either be narrow/militaristic and response to security concerns maybe based largely on hard power or its conception maybe broad and response may vary from collectively working with others to mitigate the threat perception to influencing the source of threat itself through soft power (ability to attract towards own viewpoint). A country’s strategic culture not only shapes its perception of threat but also its approach to managing and mitigating threats emanating from its immediate as well as larger security environments.

India’s anti-colonial experiences, growth trajectory, and Cold War experiences similar to most of the developing countries propelled it to recognize the importance of collective, diplomatic, and peaceful efforts toward addressing security issues as was witnessed in its role within the UN, Non-Alignment Movement and G-77.

Unlike a realist foreign policy approach, India’s foreign policy was neither guided by the viewpoint that other actors of international politics must be viewed with distrust nor was it based on the understanding that alliance (union with other states) can only be militaristic as a mechanism to maximize brute power. Gandhian belief in the force of truth, patience and persuasive means to convert the opponent toward accepting and adopting the moral and right course of action became the essence of India’s non-alignment policy and this eliminated the conception of enemy and constrained search for hard power in India’s strategic understanding while it kept alive the desire to work toward a peaceful and democratic world order. Unlike a believer of idealism, India’s non-alignment policy never believed powerful states would behave rationally constrained by international laws, norms and organizations. On the other hand, India considered active participation of like-minded states as a collective entity instrumental in shrinking the space for military and economic dominance while paving way for an alternative world order based on international peace and egalitarian global economic order.

George Tanham, a specialist on South Asian security affairs working for the RAND Corporation, based on his findings from a study of the impacts of historical and cultural factors on India’s strategic thinking, asserted that India lacked formal and systematic strategic planning and therefore a strategic culture.[1] However, the western definition of strategic culture did not recognize that strategic gains could also be attained through collective, diplomatic and peaceful efforts. In reaction to Tanham’s findings, many from India’s strategic community asserted that India has a strategic culture not only by citing Kautilya’s magnum opus ‘Arthashastra’ but frequent references were also made to the offensive strategies adopted by medieval rulers. Offensive strategies adopted by medieval rulers including Shivaji, Maharana Pratap and Tipu Sultan in their bid to pre-empt enemy’s actions no doubt influenced India’s strategic thinking and practices which became evident from the Indian way of dealing with security issues in neighborhood.[2] Nevertheless, the philosophical undercurrents of non-violence inherent in the philosophy of Buddhism and Gandhian Satyagraha tempered Indian notions of pragmatism and helped engender a doctrine of strategic self-restraint. Limited hard power capabilities not only restrained India from adopting a militaristically adventurist foreign policy, its global foreign policy choice (Non-Alignment) cast a benign impact on its neighborhood strategy and propelled it to observe strategic restraint even though traditional security-centric concerns emanating from its neighborhood continued to worry India.

India had to face harsh criticisms whenever it was perceived as being involved in power politics. For instance, its Friendship treaty with the Soviet Union in 1971 was viewed with skepticism and encouraged criticisms even from among the members of the Non-Alignment Movement as well. Similarly, India had to move cautiously, specifically in the neighborhood where it perceived most of the security threats coming from. After the liberation of East Pakistan from West Pakistan with Indian military intervention, Indian forces did not move further in the western direction to assert dominance on the areas belonging to Pakistan. India did not even use the 90,000 Pakistani prisoners of war, captured in liberated Bangladesh, to control the bilateral relationship and coerce Pakistan into abandoning its claim over Kashmir.[3] This restrained action from India has made a subtle and gradual addition to its soft-power resources.

While India tested its first nuclear device in 1974, it called it a peaceful nuclear explosion in order to avert fuss and chaos in the neighborhood. Despite rising security concerns expressed through nuclear power China’s increasing footprints in India’s neighborhood and continuous supply of arms, ammunition and nuclear material and technology to Pakistan, it was only after 24 years that India conducted another test making its military purpose clear in 1998.

Following closely on the heels of India’s test, Pakistan conducted its own nuclear test later the same year. It reflected Chinese nuclear assistance to Pakistan over a period of time making it well equipped with the necessary nuclear technology and material. Although its nuclear test invited criticisms from many major actors in international politics and US sanctions, India undertook efforts to mitigate unusual responses from the neighborhood and pacify members of the international community. India developed a nuclear doctrine combining the principles of “no first use” and “credible minimum deterrence.” It seems that it is India’s belief and practice of military restraint in many instances that was instrumental in pushing the US to clinch the civil nuclear deal even though India is not a signatory to the nuclear Non-Proliferation Treaty (NPT).

American leaders did not hesitate to praise Indian restraint vis-a-vis Pakistan on many occasions after allegedly Pakistani-sponsored terrorist attacks on Indian soil. The Bill Clinton administration prevailed upon Pakistan during the Kargil War in 1999 and asked it to withdraw its forces sent across the Line of Control. The changing gesture of the US toward India, India’s diplomatic efforts to normalize relations with China in the 1990s, and the visit by India’s then external affairs minister Jaswant Singh to China in the midst of Kargil War led Beijing to maintain neutrality during the war.

Strategic restraint has been backed by Indian society too. Indians usually expressed anger immediately after major terrorist attacks and supported coercive measures against Pakistan; however, simmering sentiments gradually cooled down and fell in place with India’s traditional craving for restraint in military actions. It has been noted that the people of India have rarely been swayed by militaristic impulses in the long term. This was observed when the United Progressive Alliance (UPA) government came back to power for a second term in 2009 even though India observed military restraint after the Mumbai terrorist attack in 2008.

Similarly, popular reactions against the Indian restraint after the Pathankot and Uri attacks did not appear to pose any major challenge to the government. Modi chose to invigorate his campaign against terror at international platforms and became successful in dissuading other South Asian countries such as Afghanistan, Bangladesh and Bhutan from joining the SAARC (South Asian Association for Regional Cooperation) Summit hosted by Islamabad in November 2016. The United Nations decision to declare Masood Azhar a global terrorist also bears testimony to India’s persistent diplomatic efforts at voicing its concerns related to cross-border terrorism at international forums.

The US under the Obama and Trump administrations considered a strategic partnership with India crucial to the American Asia-Pacific (later renamed Indo-Pacific) strategy. Biden administration organized a quad summit in virtual/online mode within 50 days in office and within a gap of a few months, the Quad held its first in-person meeting, in Washington DC on 24th September, 2021.  Key members of the Biden administration have already made it clear that the US will continue to elevate the USA–India security partnership. New Delhi also considered partnership with the US critical to its Indo-Pacific strategy as it continued to apprehend serious Chinese encroachments into its strategic periphery through Beijing’s BRI and maritime strategies.

India began to get embroiled in the balance of power politics in the Indo-Pacific region rather than being able to choose the historical path of non-alignment. The country made strategic moves to enhance its profile in the Indo-Pacific region by entering deep into the strategic ambit of the US and both signed Logistics Exchange Memorandum of Agreement (LEMOA) in 2016 and the Communications Compatibility and Security Agreement (COMCASA) in 2018.[4] India and the USA signed the Basic Exchange and Cooperation Agreement (BECA) in 2020, which provides India with real-time access to US geospatial intelligence. Both countries are co-developing air-launched unmanned aerial vehicles (UAVs) under the Defense Technology and Trade Initiative.

This apart, Indian navy kept exploring various other options of acquisition of sophisticated technology such as with the French offer of technology of their Barracuda class. France is already assisting India in making the Kalvari class conventional submarines. While India has its own nuclear-propelled submarine programme with two ballistic missile submarines (SSBN), namely, the Arihant and INS Arighat, itis planning to build six nuclear-propelled attack submarines (SSN).[5] India’s move toward enhanced military preparedness geared primarily toward deterring Beijing’s suspicious strategic moves in the Indian Ocean and South Asian region have turned it into the world’s largest arms importer, accounting for 12% of the total global imports for the period 2013-17 according to data on arms transfers released by the Stockholm International Peace Research Institute.[6]

Even as India is the only country of the Quad grouping which shared a disputed border with China, India continues to remain a reluctant partner in the anti-China thrust of the American Indo-Pacific strategy. It remained cautious and refrained from declaring that it entirely shared the objectives of the other members of the Quad (America, Japan and Australia) and stayed away from strengthening the quadrilateral format of US-Japan-India-Australia primarily as a means to contain Chinese influence. Notwithstanding the resolve of both countries to advance the U.S.-India Comprehensive Global Strategic Partnership, India’s belief in the values of non-alignment still drives its posture preventing strategic dialogues with the US on sharing of critical nuclear technologies.

By following a course of multi-alignment, the Indian government led by Prime Minister Narendra Modi has not sought to significantly alter its response to strategic environment as military restraint and strategic autonomy still characterize India’s strategic culture. However, some noticeable changes can be observed in terms of the country’s military preparedness and rhetoric. New Delhi’s changing response to security environment may induce more strategic confusion, raise the level of security dilemma and imply a greater reliance on hard power for security.

Considering the fragility of the security atmospherics in the Indian Ocean region, it must be realized that competition, balance of power, alliance formation and deterrence cannot guarantee long-term peace. India, apart from maintaining strategic restraint, needs to resume its past role (as leader of the NAM) to organize, build and influence world public opinion pertaining to the impacts of proliferation of arms and ammunitions on the global population and environment.