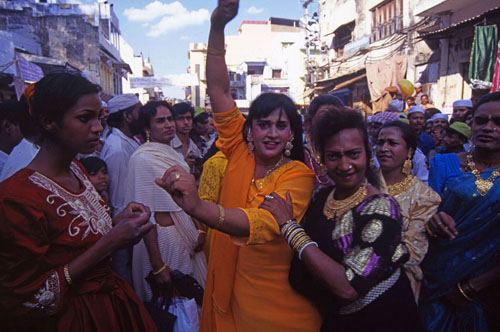 Something old, something new, something unconventional, something … transgendered? Racial equality. Religious freedom. Freedom of speech. These are the social justice issues that often come to mind when we speak of human rights. On the international stage, rights for certain communities are often disregarded. The transgender people in the developing world are one such example.

A segment of transgender people, known as “Hijras” in India, have a recorded history which goes back 4000 years. In ancient myths they had special powers to bring luck and fertility. Sadly, despite this, supposedly sanctioned stature in Indian culture, hijras face severe harassment and discrimination in every walk of life. Deepa, an elderly hijra living in Mumbai says: “Nobody says, ‘I’d love to be a hijra!’ Not if they know what happens to us. But what else can we do? A hijra has a man’s body, but the soul is a woman.”

In India, there are approximately one million transgender people. Hijras—physiological males who take on a feminine gender identity—comprise one segment of the transgender population. On the one hand, hijras are called upon to offer special blessings during auspicious occasions like weddings and birth ceremonies, while on the other, they are not only ignored but also ostracized from the society. Discrimination has prevented most hijras from obtaining decent education, jobs and housing. The majority of transgender Indians live in slums and, with limited job opportunities, resort to sex work or begging. Though some transgender Indians receive funding for HIV-prevention, most are excluded from receiving basic support for their livelihoods because they are typecast as a “high risk” population.

The uphill struggle for the hijras first begins with finding acceptance within the family. “My family didn’t know I was castrated,” tells Chandini. “My hijra friends teased me because I still went home in men’s clothes, so I decided to go home as I am. When I got there some people in the street spotted me and told my mother, ‘Here’s your son!’ She saw me and fainted. My father came, he said, ‘I don’t have a son, go away!’  I said, “I’m not your son, I’m your daughter now.’”

On unveiling the truth, hijras are usually forced to leave their family. Yet the society they  take refuge in, is equally unwelcoming.  Until recently, hijras had few rights and weren’t recognised under Indian law. It denied them the right to vote, the right to own property, the right to marry and the right to claim formal identity through any official documents such as a passport or driving licence. Accessing healthcare, employment or education was almost impossible. In the face of such odds they are forced to earn money any way they can. “In the day we go around the shops and beg,” says Deepa. “They give us a rupee each and we go away. Sometimes we dance at weddings and festivals, we can get good money from this.”

Since 2006, hijras in the state of Bihar have been employed by the government as tax collectors, singing loudly about the debt outside the defaulter’s premises until they are shamed into paying up − one of the most effective tax recovery methods ever used in India. Yet for many hijras the method of making ends meet is prostitution.

As is the case for all gay, lesbian and bisexual people living in India, simply by being sexually active hijras are said to break the law. Section 377 of the Indian Penal Code (IPC) outlaws any “carnal intercourse against the order of nature” − in other words, any sex that is not between a man and a woman with the aim of reproduction. Brought in by the British in 1860 to curb the “heathen customs” of the local population, violation under IPC carries with it a potential life sentence.

While attitudes in the UK have matured considerably and such legislation has long since been removed from the British statute books, it still remained rooted in the Indian system until recently. Shockingly, sometimes the police personnel, gangs of local thugs known as “goondas” frequently rob and sexually assault hijras on the street. These attacks are rarely prevented or reported by the locals, since, they themselves have apprehensions about the hijras and are more often than not, “scared” of them.

Until very recently these attitudes were reflected and strengthened by the Indian media which itself seemed to suffer from certain amount of gender vertigo. Hijras were routinely portrayed as wily tricksters who led unsuspecting men astray or half-man half-woman freak shows, almost devilish in their customs and practices. In 2003, an HIV/AIDS and human rights research centre in Lucknow was raided and the coordinator jailed under IPC 377 for “conspiracy to promote homosexual activities.” An English language newspaper ran the headline: “Gay Racket Busted- 2 NGOs Caught in the Act.”

While transgender Indians continue to face discrimination, they have also made significant social and legal gains. The states of Tamil Nadu and Kerala were the first to introduce a transgender (hijra/aravani) welfare policy. According to which, transgender people could access free Sex Reassignment Surgery (SRS) in the Government Hospital (only for MTF); free housing program; various citizenship documents; admission in government colleges with full scholarship for higher studies; alternative sources of livelihood through formation of self-help groups (for savings) and initiating income-generation programmes (IGP). Tamil Nadu was also the first state to form a Transgender Welfare Board with representatives from the transgender community. In 2016, Kerala started implementing free SRS through government hospitals. “The Truth about Me: A Hijra Life Story” by transgender A. Revathi, is part of the syllabus for Final Year students of The American College in Madurai. The American College is the first college in India to introduce Third-Gender literature and studies for “Genderqueer” people was coined in this College by gender activist Gopi Shankar.

In November 2009, transgender people won the right to be listed as “other” rather than “male” or “female” on electoral rolls and voter identity card. More so, in October 2010, the Karnataka state government approved that transgender citizens become eligible for government seed-funding to start self-employment ventures—a change catalyzed by AJWS’s grantee, the Salaam Initiative. Hijras were factored into the government’s policy making for the first time when they were named as a target group for a breakthrough de-addiction programme. In the same month the state of Tamil Nadu allowed hijras, if they wish, to be recognised as “T” rather than just “M” or “F” on ration cards with the same being planned soon for passports and driving licences. Indian Census had never recognized third gender  while collecting census data for years. But in 2011, data of transgender people were collected with details related to their employment, literacy and caste. In India, total population of transgender is around 4.88 lakh as per 2011 census.

On 15 April 2014, Supreme Court of India declared transgender people as a socially and economically backward class entitled to reservations in receiving education and jobs, and also directed union and state governments to frame welfare schemes for them.

On 24 April 2015, the Rajya Sabha passed the Rights of Transgender Persons Bill 2014, guaranteeing rights and entitlements, reservations in education and jobs (2% reservation in government jobs), legal aid, pensions, unemployment allowances and skill development for transgender people. It also contains provisions to prohibit discrimination in employment, prevent abuse, violence and exploitation of transgender people. The Bill also provides for the establishment of welfare boards at the Centre and State level, and for Transgender Rights Courts. Social Justice and Empowerment Minister Thaawar Chand Gehlot stated on 11 June 2015, that the Government would introduce a comprehensive bill for transgender rights. According to Mr. Gehlot, the Government intends to provide transgender people with all rights and entitlements currently enjoyed by Scheduled Castes and Scheduled Tribes.

With the aforementioned legislations in place now, we can hope for amelioration in the condition and status of the transgender people. It is imperative that they are considered to be as much an essential part of the society as any other gender. They should be accommodated in the society from the very beginning of their lives, like admitting them into conventional schools. This would even help lessen the fear and apprehensions fabricated in the minds of the general public at large against the transgender people.

Fortunately, something, is beginning to alter in the traditional Indian mindset. There seem to be noticeable changes taking place in terms of how this group is being treated and recognised by mainstream society. Ela Gandhi has correctly observed that, “a law alone cannot solve the problems of society, the attitude of the people needs to change” and to win the battle against the discrimination of the transgender community, we need to bring change in the mind set of the people.