Standing for media’s rights in India 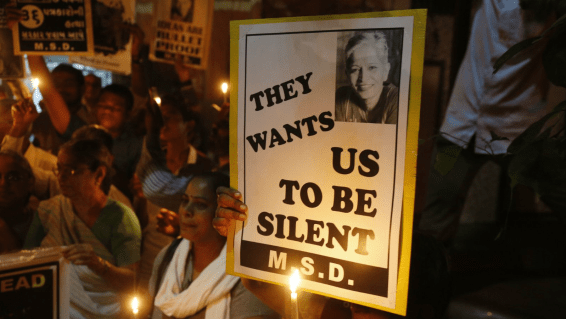 India, largest democracy of the globe, remains a bad place for working journalists irrespective of the regimes in power in New Delhi or any province capital. The populous country witnesses the murder of around five media persons on average in a year and that has not been changed for decades. The land of Bishnu, Buddha, and Bapu has however hardly succeeded in resolving any of those journo-murder cases logically and legally.

The media fraternity of the south Asian nation now plans to observe the birthday of Mohandas Karamchand Gandhi; a lawyer turned journalist turned India’s Father of the Nation, on October 2 with the countrywide demonstrations. The participants thus would commit to maintaining their defiance to all mental and physical challenges in their professional lives.

The month of September poured three shocking news of journo-murders from different parts of India, and the media fraternity has seemingly discovered the vulnerability again for those who pursue serious journalism. The year 2017 also witnessed the killing of eight journalists in nine months, but as usual, the reactions to those murders from the authority and the public remained almost lukewarm.

It was only Kannada editor-journalist Gauri Lankesh’s murder on September 5 at her Bengaluru (earlier known as Bangalore) residence that aroused massive protests across the country. Publisher of Gauri Lankesh Patrike, a Kannada language newspaper in Karnataka of central India, Ms. Gauri was shot dead by unidentified gunmen, following which strong reactions were observed not only from inside the country but also various international organizations.

They were in a hurry to make statements that the outspoken journalist was targeted by the ruling political elements as she used to criticize both RSS and BJP.

However, the Congress-ruled Karnataka province government and its chief minister Siddaramaiah had a cordial relationship with Ms. Gauri. Soon after her assassination, the provincial government chief announced her demise as a personal loss. But for reasons, best known to Siddaramaiah only, the chief minister’s reactions against the
killer(s) of Ms. Gauri, 55, were soft. So does the investigation process!

Protest-demonstrations were so loud that it inspired a Communist Party of India (Marxist) run Tripura government chief to personally join in a demonstration at Agartala. The chief minister, Manik Sarkar’s participation in the protest program, encouraged the media fraternity of northeast India and he was thoroughly appreciated for the gesture.

But when a young television scribe of Tripura itself was beaten to death by a mob, the same CPI (M) chief minister remained silent. The Agartala based journalists, while condemning the murder of Shantanu Bhowmik on September 20, had to raise voices for getting reactions from Sarkar. Even then the chief minister, also in charge of home portfolio, pronounced a spongy reaction towards the incident.

However, the condemnations from various national and international bodies were pouring against the brutal murder of Shantanu, 29, who used to work for an Agartala based Bengali-language cable news channel named Din-Raat. A series of protest programs were organized by various Indian media bodies across the country demanding justice to Shantanu’s bereaved mother and sister.
On a fateful day, Shantanu went to cover a program of Indigenous People’s Front of Tripura (IPFT), which was protesting against the ruling CPI (M) and slowly it turned violent. Claimed to have support from the tribal population of Tripura, the IPFT maintains its demand for a separate homeland (read Twipraland) for the tribal people out of Tripura. The party, which appears to have a political understanding with the BJP, continued its violent protests since the last few years.

The IPFT protest program at Mandwai of west Tripura, bordering Bangladesh, soon witnessed the arrival of many cadres belonged to the CPI (M)’s tribal wing Tripura Rajya Upajati Ganamukti Parishad (TRUGP) at the location. Both the parties had already engaged in violent clashes on the previous day at the same venue.

So the situation got charged, and finally, members of both IPFT and TRUGP turned aggressive and later violent. Shantanu started shooting the violent activities with his mobile phone, as his lens-man avoided the professional camera for fear of abusive reactions from the agitators. As Shantanu started capturing the visuals of IPFT members attacking the opponent & police and also damaging vehicles on the roadside, he was asked initially to stop recording.

Later the protesters chased him for the phone, and some of them turned unruly to attack Shantanu with stick-rods and other sharp items finally. Blood soaked Shantanu was rescued and sent to the hospital by the police, but till then he stopped breathing. His phone was, however, missing, which was also revealed by the State police chief Akhil Kumar Shukla.

Meanwhile, Shantanu’s killing was condemned and condoled by various international forums like the New York-based Committee to Protect Journalists (CPJ), the Pars based Reporters sans/without Borders (RSF), the Brussels based International Federation of Journalists (IFJ) etc., where everyone asked the Tripura government to go for a ‘thorough investigation’ into the death of Shantanu to bring those responsible to justice and also ensure the future safety of journalists.

Amnesty International, in its condemnation statement, pointed out that the killing of journalists cannot become the order of the day. State governments in India must do everything in their power to prevent journalists from becoming targets for their viewpoints or affiliations. Authorities must end impunity for these killings, it added.

Condemning the murder of Shantanu, UNESCO director-general Irina Bokova said, “I trust the authorities will conduct an investigation into this killing and bring its perpetrators to justice. It is essential that journalists be able to keep us informed of events without fearing for their lives.”

All media bodies of northeast India came put with the protest demonstrations against the killing of Shantanu and demanding a high-level probe (preferably by Central Bureau of Investigation).
Extending moral supports to the Tripura journalists for justice, the North East Union of Working Journalists (NEUWJ) also asked the local government to compensate the family of Shantanu adequately.

Condemning the murder of Ms. Gauri and Shantanu, the newly launched forum urged the Union government in New Delhi to formulate a national action plan for delivering earliest justices to journo-victim families. It also fervently appealed to the media fraternity of the country to get united on demanding safety & security measures for working journalists across India.
For records, Shantanu was the seventh Indian journalist to be killed this year. The string of killings began with Hari Prakash, 31, whose dead body was recovered in Hazaribag locality of Jharkhand on January 2. Then came another bad news from Bihar, where unidentified goons gunned down Brajesh Kumar Singh, 28, at Samastipur locality on January 3.
The third and fourth incidents involving the murder of working journalists were reported from Madhya Pradesh, where Shyam Sharma, 40, was stabbed to death by miscreants at Anshul locality on May 15 and Kamlesh Jain, 42, was shot dead in Pipliyamandi locality May 31.

Later a Haryana based television journalist (Surender Singh Rana, 35) was shot dead on July 29, and a Mohali (Punjab) based senior editor (KJ Singh, 66) along with his old-age mother was found murdered on September 23.

India lost six journalists to assailants in 2016, which was preceded by five cases in 2015. It witnessed killings of two scribes in 2014, but the year 2013 reported as many as 11 journalists’ murders, where three northeastern media employees also fall victims to the perpetrators. The killing of Sujit Bhattacharya, Ranjit Chowdhury, and Balaram Ghosh at Agartala broke as sensational news as Tripura had no recent record of journalist-murders.

Soon after Shantanu’s killing, blame games started as the BJP accused the Left government at Agartala of failing the law & order situation.

The saffron party also demanded Sarkar’s resignation. The Congress leaders criticized both the ruling CPI (M) and the BJP for triggering communal violence dividing the population with tribal-nontribal (read Bengali) divides ahead of early next year’s Assembly polls.

Lately, after a lot of hue & cries, the Tripura government decided to constitute a SIT to probe into the astonishing murder, where DGP Shukla claimed that the police had identified the culprits involved with the slaughtering of Shantanu besides three persons already been arrested. Following the demand of compensation raised by the Tripura based journalists, the State government also agreed to offer rupees one million to the bereaved family.