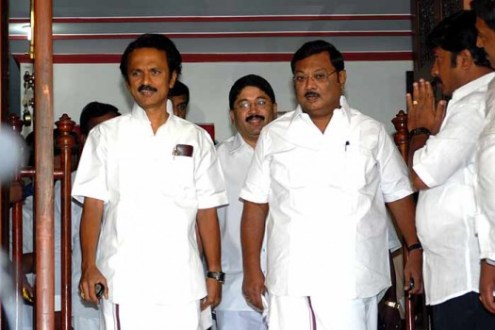 Why did the DMK’s newly-anointed president single out the saffron party in his acceptance speech? Wary of how its alliance with the BJP in the past had cost it votes, the party is determined to steer clear of any harm by association, says N Sathiya Moorthy.

In invoking American civil rights activist Martin Luther King, Jr, by declaring, ‘I have a dream…’, or ‘Enakku oru kanavu ulladhu…’ in Tamil — and what that dream was all about, Dravida Munnetra Kazhagam’s president-elect M K Stalin began well his new and long-awaited innings at the helm of the party, in Chennai on Tuesday.

It may not be as powerful an acceptance speech as what King had delivered in his time decades ago, and more so by his late father, Muthuvel Karunanidhi, but then, Stalin was the first one to accept and acknowledge as much, when he began his speech at his anointing ceremony at the party general council without any ado.

“I cannot match him,” Stalin declared while referring to Karunanidhi’s multiple talents, beginning with his spell-binding speeches, but then he added with equal humility that he still had a strong heart, handed down by Periyar and Annadurai, the founding fathers of the Justice Party movement in Tamil Nadu, to take what it needs to.

It is anybody’s guess what Stalin’s speech-writer, if there was one, had in mind, but the King-connect in particular has been left for political commentators to make the link. For sure, most of his party audience and TV-watchers in the state did not make the connection.

Yet, Stalin did spell out a broad spectrum approach of his ‘vision’ for the party and the state, going up to the nation and the larger world, underlining that the cadres and the second-line too needed to relook at the DMK from a contemporary perspective.

What stood out in his listing of the ‘vision document’, if at all it could be called one, was that he reiterated the lesser-acknowledged lines of his late father that ‘we are not against believers (in god), even as we continue to believe in our views’.

If nothing else, this line should silence social media critics, who have been sending out meme after meme on the way the Karunanidhi family observed the latter’s 16th day funeral ceremony in a semi-ritualistic way, and cadres who spread out fruits and flowers at his burial place on the famed Marina sands, alongside the memorial for his political mentor and predecessor Chief Minister C N Annadurai.

However, Stalin did not leave out the ‘kaavi’, or ‘saffron’, leadership of Prime Minister Narendra Modi from his speech, which did not name any political leadership in the state or elsewhere in the country, for being thrown out. He did target the state government under AIADMK Chief Minister Edappadi K Palaniswamy, but without mentioning names.

It was not without reason. A few days ahead of the DMK presidential poll and anointment ceremony, ill-informed sections of the national and regional media had speculated that the DMK was moving closer to the ruling BJP at the Centre ahead of the Lok Sabha polls.

This followed the DMK’s prior announcement that BJP president Amit Shah would attend a memorial meeting for Karunanidhi, being organised in Chennai, on August 30, at which other political party leaders and chief ministers from various states are scheduled to participate.

Ahead of Karunanidhi’s hospitalisation and death, the DMK under Stalin as working president had called for a ‘state autonomy meet’ attended by non-BJP, anti-BJP parties and chief ministers from across the country.

With the likes of Telangana’s TRS Chief Minister K Chandrasekhar Rao and his Andhra Pradesh counterpart N Chandrababu Naidu visiting an ailing Karunanidhi in his home, ahead of his hospitalisation, the DMK leadership understood that the party was suddenly getting into the national big picture after a time.

In changing the character of the August 30 rally from politics to memory for Karunanidhi, the DMK wanted to bring out the multi-faceted qualities of the departed leader, who was one of a kind — leading a party for full 50 years, living through decades with prime ministers starting from the first one in Jawaharlal Nehru, to incumbent Modi.

In inviting the BJP for the ceremony, as against the original ‘state autonomy’ conference, the Stalin leadership also wanted to draw a line. In fact, barring the ruling AIADMK in the state, against which the DMK cadres nurse a hurt feeling for denying Karunanidhi a resting place on the Marina, Stalin also wanted to send out a message that he was a different type of Dravidian leader.

In between, Stalin also rushed to Delhi to pay his last respects to late Prime Minister Atal Bihari Vajpayee. The fact that Vajpayee did attend the funeral of Union minister Murasoli Maran, long after the DMK had privately informed the BJP leadership of its decision to quit the ruling NDA ahead of the 2004 parliamentary polls, did weigh with Stalin & Co.

The DMK announced Amit Shah’s name only after the BJP office at Delhi reportedly informed them of the level of representation by the party. Against this, even while the DMK was planning the ‘state autonomy’ conference, Rahul Gandhi had reportedly conveyed his inability to be present, given his prior overseas commitments during the period.

Thus, no one in the DMK was surprised when the Congress named Ghulam Nabi Azad to represent the party at the Karunanidhi memorial. What, however, surprised those in the know is the BJP’s purported decision to scale down representation, and send Union minister Nitin Gadkari, for the August 30 event.

Incidentally, Gadkari was the last of the Union ministers and BJP leaders to have visited Karunanidhi in hospital, less than 24 hours before the latter’s death.

Against this background, Stalin, it is said, had to take Modi’s name in his acceptance speech, if only to send out a message that the earlier announcement about Shah’s participation in the August 30 function did not indicate any movement towards an electoral alliance with the BJP.

As may be recalled, the DMK is upset still about Modi not granting Stalin a time even once after the latter had written to him thrice in four months last year, to present some of the pressing development issues of Tamil Nadu, as the Leader of the Opposition in the state assembly.

In a way, the BJP’s decision to scale down party representation at the Karunanidhi memorial may have helped the DMK silence speculation of an electoral kind.

Otherwise, now, as ahead of election 2004, the DMK is apprehensive about losing the substantial ‘minorities’ vote-bank, if they were speculated to be considering a BJP alliance.

As the DMK analysis had concluded after the party lost the 2001 assembly polls, the BJP-NDA alliance and participation in the Vajpayee government had cost it dearly.

The DMK also concluded that by crossing over to the rival AIADMK camp under much-harassed former chief minister Jayalalithaa, the anti-BJP Tamil Maanila Congress and the residual Congress parent of the latter had made a difference.

More recently, ahead of the controversial R K Nagar by-election to fill Jayalalithaa’s assembly seat, PM Modi had paid a courtesy call on ailing Karunanidhi at his home.

According to DMK insiders, that was enough for the substantial ‘minorities’ votes in R K Nagar to go the way of AIADMK ‘rebel’ and independent candidate T T V Dhinakaran, swelling his victory margin far ahead of Jaya’s 2016 figures and pushing DMK’s Marudhu Ganesh to the third place, behind AIADMK presidium chairman and local strongman, E Madhusoodhanan.

In the bargain, the DMK also lost its security deposit in the much-watched by-election, where the earlier polling had to be countermanded, following large-scale ‘cash-for-vote’ charges against the Dhinakaran camp.