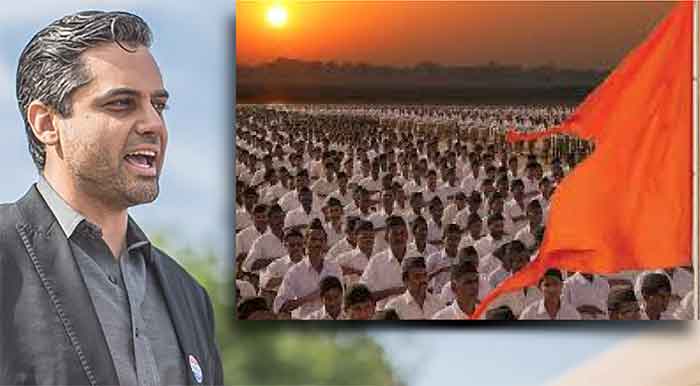 In August 2019, Congressman Khanna charted a new course for the Indian-American diaspora when he commented on reportage about Tulsi Gabbard’s RSS links, stating: “It’s the duty of every American politician of Hindu faith to stand for pluralism, reject Hindutva, and speak for equal rights for Hindus, Muslims, Sikhs, Buddhist, and Christians.”

“In the coming months, we will see a debate within the South Asian American community and the Democratic Party regarding the morality of Hindutva and how the party can reach consensus given the political crisis in India. Khanna’s statement goes to the heart of this debate by laying bare the obvious hypocrisy of Hindutva’s American supporters.

“South Asian Americans simply cannot claim to support civil rights and equality for all Americans while simultaneously advocating for religious supremacy that results in the rape, torture, murder and oppression of minorities in India.

That debate about Hindutva — within the South Asian American community and the Democratic Party — has begun to rage, particularly in regards to Sri Preston Kulkarni’s congressional candidacy.

Kulkarni is now facing allegations that the Hindutva lobby in America — which was established in the 1970s and has grown deeply entrenched and highly influential both in American politics as well as in Indian politics — is playing an integral role in his campaign.

Understanding the extent of the influence which the Hindutva lobby has on Kulkarni’s campaign requires understanding Ramesh Bhutada.

As far as the RSS in America goes, Bhutada is not a lackey, a sympathizer, an orbiter, an associate, or anything of the kind. He’s a core figure who holds a formal executive role and has been deeply involved for 40 to 50 years.

Ramesh Bhutada is Vice-President of HSS (the international wing of the RSS, an Indian paramilitary that serves as the fountainhead of Hindutva). He is also the founder of the first HSS chapter in Houston. His cousin-in-law, Vijay Pallod — who claims to be the man who “discovered” Kulkarni — describes seeing a “steady stream of RSS workers” at Bhutada’s house in the 1980s. Bhutada has hosted RSS executives on tours to the States — including current RSS chief Mohan Bhagwat himself, who has stayed in Bhutada’s home.

Here is as brief a summary as possible of some of the highlights of Bhutada’s RSS activities over the past 10 years:

In 2010, Bhutada — along with Vijay Pallod and others who are donors to Kulkarni’s campaign — traveled to an HSS summit in India to hear a keynote speech by Mohan Bhagat; there, they were pictured wearing the uniform of the RSS while posing with the founder of the HSS.

In 2011, he organized what was described as a “first of its kind” OFBJP “training camp” for activists which was conducted by the political advisor to the man who was then president of the BJP.

In 2014, Bhutada organized a phone-bank in Houston of 700 people who “worked round the clock” making calls “to motivate voters in India” to vote for the BJP. While he was doing that, he was also sending off a team of 30 OFBJP volunteers from Houston — including Vijay Pallod — to serve as boots on the ground in India to work for the BJP’s election.

Later, when Modi won, Bhutada wrote an article in the Houston Chronicle in which he insisted that Modi’s “RSS training” was the reason that he won and argued that Modi’s “upbringing in the culture of the RSS” meant that “critics should revisit the RSS.”

In 2015, as one of Tulsi Gabbard’s top donors, he attended her relatively small wedding in Hawaii, where he was joined by RSS spokesperson turned BJP spokesperson Ram Madhav.

In 2019, Ramesh Bhutada, along with Rishi Bhutada (his son) and Jugal Malani (his brother-in-law) — all of whom are large donors to Kulkarni’s campaign — were key organizers for “Howdy Modi.”

Ramesh Bhutada is also a key organizer — and fundraiser and donor — for Sri Preston Kulkarni’s campaign for Congress.

In 2018, after winning the primary, Kulkarni stated, “In this campaign, Rameshji has become like my father.” According to Vijay Pallod (who has claimed credit for “discovering” Kulkarni), “Ramesh met with community stalwarts, regardless of their party affiliation to bring their financial power to help Kulkarni.”

Last year, when Kulkarni launched his second campaign for Congress, Bhutada — who was described as having a “strong emotional bond” with the candidate — was one of the key speakers at the event.

Along with his time and energy, Bhutada has poured his treasure into getting Kulkarni elected. In total (along with his immediate family members), he has donated over $50,000.

So far, I’ve identified well over $50,000 more in donations made collectively by just seven other individuals (and their families) who are known as key executives in Hindutva groups in America. A cursory investigation has revealed thousands more, and I’m in process of attempting to identify as much as possible of the funding that Kulkarni has received from Hindutva sources.

The extent of Kulkarni’s financing by Hindutva groups deserves a far deeper dive, but one thing remains apparent: Ramesh Bhutada, a top RSS man in America, is pulling the strings of his campaign.

I’m hearing rumors that Kulkarni — who has had a lengthy career in the foreign service — is interested in being assigned to the Foreign Affairs Committee, if elected. I can only speculate about what kind of agenda he would adopt on the issue of US-India relations as the Modi regime spreads its fascist wings and implements its Hindutva ideology with increasingly lethal results. One reason I can only speculate is because Kulkarni has apparently not issued any statement on foreign policy, which is quite strange considering his foreign service background.

The only thing I know is that Kulkarni supposedly quit the foreign servicebecause of the comments Trump made in support of white supremacists in Charlottesville.

If he is so principled, then why is he so closely aligned with a man who has spent years coordinating major support for Modi? In fact, with a man who was involved in organizing the “Howdy Modi” event at which Trump was the other chief guest, at which Trump and Modi literally did a dance of love around the NRG Stadium, and at which Modi declared: “Ab ki baar, Trump sarkar” [meaning “this time it’s the turn of the Trump administration,” a statement that was widely interpreted as an endorsement for Trump’s re-election].

If he is so principled that he abandoned his career to protest Trump’s support for white supremacy, why is he blind to Modi’s even more blatant support for Hindu supremacy?

White nationalism and Hindu nationalism are kissing cousins. They mirror each other. They share ideological threads to a very, very great degree. Much has been said about how the RSS, in the 1920s to 1940s, was inspired by the European fascist movements, praised them, and even had direct interactions with them. But today, we also have connections. We have the white supremacist terrorist Anders Breivik of Norway who praised the RSS for dominating the streets and attacking Muslims, said the goals of white nationalists and Hindu nationalists are more or less identical, and called for collaboration with them.

And we also have Arktos — which is the largest alt-right publishing house in the world. Arktos publishes books praising Hindu nationalism. Its European executives have arranged multiple meetings with RSS and BJP leadership. In fact, it was actually originally headquartered in India. And its founder was at the Charlottesville rally.

I’ve heard talk about how Kulkarni’s opponent is Islamophobic — which I don’t deny, and I certainly don’t care to see him win — and how Kulkarni is making all kinds of efforts to reach out to the Muslim community and express “positive sentiments.”

Sentiments are great, but they are just that. Sentiments. And Kulkarni’s sponsor, Ramesh Bhutada, is doing the same thing. He’s an advisor to the Indian American Muslim Association of Greater Houston. That’s the nature of the RSS in America. They pay lip service to democracy, diversity, equality, liberalism, multiculturalism, and the like while, at the same time, extending their support to one of the most organized, fascist, and radically Islamophobic groups in the world.

Founding ideologues of the RSS literally compared Indian Muslims to German Jews. The goal of the RSS is to eliminate Muslims. And they have repeatedly acted on that goal ever since 1947.

The current prime minister of India — who Kulkarni’s sponsor campaigned systematically and tirelessly to help get elected — rose to power by overseeing the slaughter of Muslims by RSS soldiers.

And yet, just like Bhutada appears to be doing with his own expression of “positive sentiments” towards Muslims in Houston, the RSS did a similar thing after the 2002 Gujarat Pogrom. That very same year, they founded the Muslim Rashtriya Manch. Apologists for the RSS today still constantly point to that so-called “Muslim wing of the RSS” as evidence that the group is not actually anti-Muslim.

My question, in Kulkarni’s case, is this: is it okay if his campaign is propped up by people whose primary passion is supporting Islamophobic groups in India that massacre Muslims as long as, here in America, he refrains from actually saying Islamophobic things and instead does photo-ops with Muslims?

Of course, as we all know — and, sad to say, minority groups are probably much more painfully aware than all of us — people who are seeking political power, especially when they have to do it peacefully, are almost always willing to use other people as props for photo-ops that bring them good publicity, money, and votes.

So, to wrap up, why should there be any impediment at all for Kulkarni to make a statement about the RSS or Hindutva? Congressman Khanna did it. It’s a pressing issue both in India and in America, especially in context of how months-long protests against passage of the CAA and proposal of the NRC — which were led by Muslims — resulted in the February 2020 Delhi Pogrom.

Why, therefore, should a supposedly progressive candidate like Kulkarni — especially as an Indian-American — have even a moments hesitation before denouncing the violence of Hindutva?

Or expressing even the most minor of concerns about Kashmir — India’s only Muslim-majority region — where international bodies are warning here is a rising risk of genocide? Congresswoman Jayapal has been quite vocal about it. In fact, she’s been so vocal that when India’s External Affairs Minister, Jaishankar, was scheduled to meet a group of congressional representatives he said that he would only do so on the condition that Jayapal was left out.

Notably, taking these stands has not harmed the electoral prospects of Khanna and Jayapal in the least. In fact, it’s probably helped them specifically because these are progressive issues. In fact, for a progressive Democrat in America, I would argue that there is very little downside to doing it — unless, of course, your key organizers, fundraisers, and donors happen to be RSS leaders.

The last thing I would say is this: whether Sri Preston Kulkarni win or loses is as issue that has ramifications far beyond the borders of the 22nd congressional district. It has not just national but international implications. What are the ramifications if he wins? I’ll leave that an open question. But if he loses, especially if he loses because of his association with people who aided and abetted the rise of fascism in India, it will cause shockwaves that could positively impact American politics, Indian politics, and the lives of persecuted Indian minorities for years or even decades to come.

Pieter Friedrich is  a social activist