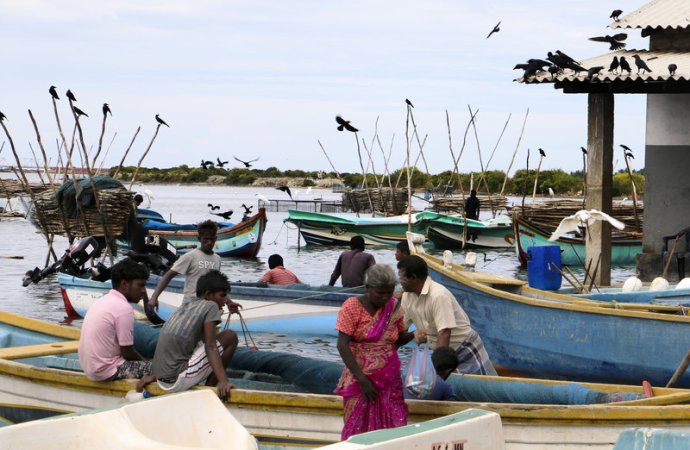 Despite the intensity of the ethnic conflict, reconciliation always remained an attractive scheme or slogan for many civil society actors and political figures in Sri Lanka. With the end of the war in 2009, reconciliation transformed into an integral part of the political discourse. Many believed that the termination of the LTTE bestowed an opportunity to bring the hitherto divided communities together through political means. The government headed by President Rajapaksa, who defeated the LTTE, was keen on bringing the land together rather than the people. Leaders of the former government chose to intensify security measures and the restrictions on the Tamil people to achieve the goal of territorial integration. The Rajapaksa government also ignored the international call for accountability as a means to reconciliation. This approach apparently dissatisfied the Tamil community, thus leading to further ethnic polarization.

Government and the Tamils

Consequently, the Tamil people collaborated with the predominantly Sinhala South, to bring the Rajapaksa government down in 2015. The main Tamil party, the Tamil National Alliance (TNA), extended unconditional support to the coalition that opposed Rajapaksa and facilitated the election of President Maithripala Sirisena. Despite being the main opposition party, the TNA tacitly works with the present government. Therefore, the government and President Sirisena are viewed as sympathetic to the Tamil issues and are expected to address Tamil political concerns.

The government also co-sponsored the United Nations Human Rights Council (UNHRC) resolution on Sri Lanka, adopting the international view that alleged human rights violations should be investigated with international assistance. During and after the presidential election, Sirisena promised constitutional reform as a means to promote good governance and reconciliation. In other words, constitutional reform was conceived partly as a settlement project. On the other hand, the government to date has not done anything to investigate the alleged human rights violations, as promised. The investigative mechanism the government promised has been stagnated at the point of discussion whether international assistance is needed for a mechanism of inquiry.

What is clear from the government attitude is that it believes more on constitutional reform to address minority concerns rather than the investigation. If this is true, then there has been a philosophical similarity between the Rajapaksa government and the Sirisena government on this issue. Senior members of the Rajapaksa government, such as Gotabhaya Rajapaksa, have consistently emphasized the importance of forgetting the past, i.e., the last phase of the war, and moving forward. They relied on national security to go forward and did not have a plan to structurally accommodate the minority communities. The former government promoted selective public amnesia as atrocities of the LTTE were remembered and the war victory was celebrated with the patronage of the state.

Promoting conflict resolution and reconciliation through constitutional reform is not a bad idea for several reasons. For example, true reconciliation could be achieved only when political issues that paved the way for the ethnic conflict are resolved. Truth commissions or similar institutions, which ignore the need to address socio-political needs of minority communities, cannot facilitate new relations between the formerly warring communities in Sri Lanka. Truth commission style institutions have the potential to exacerbate ethnic tension, and there has been no concrete evidence to suggest that the fact will inevitably lead to reconciliation.

Moreover, given the mindset of the Sinhala majority community, an investigation that targets even partially the state armed forces is not feasible. Any attempt to investigate the armed forces would be violently resisted, and it could lead to the erosion of the popular support for the government. This is exactly why there has been absolutely no progress on this front, despite the government promises to the international community and the United Nations. On the other hand, a meaningful constitutional reform scheme could accommodate aspirations of the minority communities and alter structures to create a more inclusive state. Hence, from a policy perspective, amended constitution could contribute immensely to the cause of national reconciliation in Sri Lanka.

The problem, however, is that chances for meaningful constitutional reform also remain bleak. The political environment in Sri Lanka today does not instill the confidence that a constitutional reform scheme that would benefit the minority communities is feasible. In Sri Lanka a two -thirds approval in the national legislation is necessary to change the constitution. Some changes require the approval of the people in a national referendum.

First, it seems that the government would find it difficult to garner a two-thirds majority for meaningful constitutional reform. Although the current administration consists of the two primary parties, the Sri Lanka Freedom Party (SLFP) and the United National Party (UNP), there has been a split within the SLFP. Former President and Chairman of the SLFP, Mahinda Rajapaksa, currently leads a hardline faction consisting of about 50 members of parliament. The group calls itself the Joint Opposition (JO). Reports indicate that the group is in the process of forming a new political party. The joint opposition will not support changes that alter the current unitary structure of the state. Any concessions regarding political power could also be resisted. Moreover, the group has been planning to use schemes to change the constitution as a political issue against the government. It is possible that the JO would use any proposal to modify the constitution as the launching pad of the proposed new political party. The new political party, if formed, could also attract more nationalist members of parliament. The Jathika Hela Urumaya (JHU), which is a part of the government now, may also oppose meaningful devolution of power for the minorities. The JHU has been founded on anti-minority philosophies. Therefore, the government is unlikely to garner a two-thirds majority in parliament for constitutional reform. This perhaps is the reason why progress on this front is painfully slow.

The referendum could also be a major hurdle. The Sinhala community which forms about 73 percent of the total population could unilaterally halt any concessions to the Tamils in the national referendum. They have the numbers to do this. They may also gain the assistance of the Muslim community in this endeavor. The Muslims of Sri Lanka have continually opposed devolution of power to the Tamils. They prefer the status quo. Therefore, they may also vote against a scheme that devolves power targeting the Tamil community.

Hence, the two principal schemes proposed to promote reconciliation face serious obstacles. Both seem unlikely to succeed. Hence, ethnic reconciliation has been stagnated. Meanwhile, there has been signs of re-radicalization of the Tamil community. Vigneswaran, Chief Minister of the Tamil-dominated Northern Provincial Council, leads a campaign, which wittingly or unwittingly hardens Tamil political sentiments. Vigneswaran erroneously believes that an international investigation is more important than accommodation through constitutional reform. The general lethargy within the TNA leadership helps Vigneswaran to promote his agendas. The lack of progress regarding the investigation and constitutional reform has been used against the government by Vigneswaran and his allies. The ongoing trends within the Tamil community make the stagnation on this issue much more dangerous.