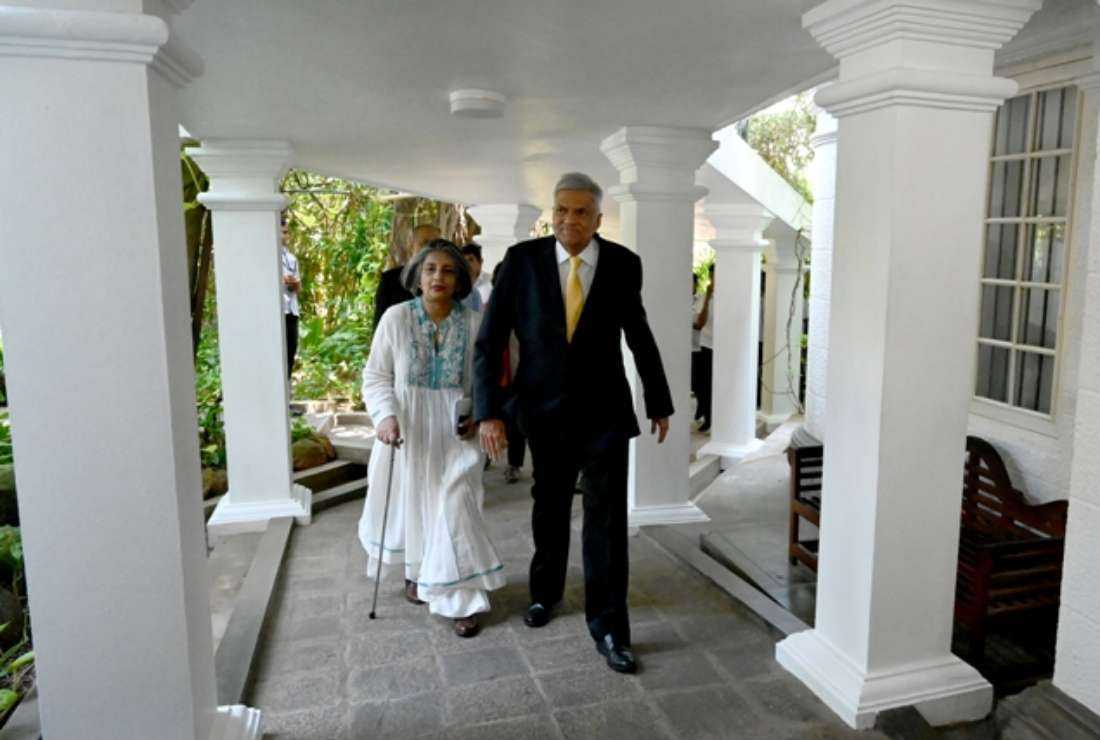 Sri Lankan President Ranil Wickremesinghe with his wife Maithree in November 2019. Whether Wickremesinghe’s administration has the stomach for the reforms needed to resuscitate a collapsed economy will determine the island nation’s fate. (Photo: AFP)

President Ranil Wickremesinghe is confident a multi-billion-dollar bailout by the International Monetary Fund (IMF) will enable Sri Lanka to have a functioning economy by 2024 but that’s cold comfort and a long way off for the millions of people left stranded with few prospects.

Underlining their plight is stagflation, an economic phenomenon where inflation takes hold while a nation’s wealth declines, a double whammy for the household budget. Sri Lanka’s numbers — a six percent economic contraction in 2022 with inflation at 70 percent — are breathtaking.

It’s a testament to years of mismanagement and alleged corruption by the Rajapaksa family who racked up a US$51 billion national debt while depleting foreign reserves to the point of bankruptcy, before they ran out on their country, leaving their people to pay.

Sri Lanka has foreign reserves of just $1.7 billion. It needs $7 billion to see out this year, meet its debt obligations and import the much-needed commodities like oil just to push start the economy.

Wickremesinghe has no choice but to negotiate an IMF package and a debt restructuring with Sri Lanka’s top lenders; Japan, the Asian Development Bank and China.

China has indicated a willingness to help after Colombo requested a $4-billion aid package to repay debt and fund imports while offering to export Sri Lankan black tea, sapphires, spices and garments but the given timeline was “at some point.”

An IMF deal is expected to be hammered out next month but it will be a tediously slow process with harsh austerity measures, like tax hikes and spending cuts, attached. Wickremesinghe’s 2024 target is sounding ambitious.

Any return to prosperity, as one analyst put it: “Is years, not months, away.”

The hardships of this year, like fuel queues that stretch for kilometers with motorists sleeping rough for days on end, have emerged as the new norm for Sri Lanka’s 22 million people.

There is no money and the Ceylon Petroleum Corporation is unable to pay the country’s oil bill, accounting for around 130,000 barrels per day, and Wickremesinghe’s new administration has warned that oil shortages will continue for at least another 12 months.

A lack of fuel has resulted in a severe reduction in the distribution of essential items like rice, bread and medical supplies, particularly in the countryside. That will drive prices even higher and result in malnutrition and unprecedented hardship for the poor.

Children can’t get to school and will be further deprived of an education in addition to the school years already lost due to the Covid-19 pandemic. Jobs for their parents are evaporating and officials say 750,000 people have been tipped into poverty by the crisis so far.

“People are suffering, people are fighting in the supermarkets where there is no food. There is no fuel, no buses, nothing. People have to walk 10 to 20 kilometers in the streets, in the heat, just to get things done,” said Pakeer Usman, deputy mayor of Beruwala in the southwest.

“This happened because of the Rajapaksa family. They took millions,” he said, referring to former president Gotabaya Rajapaksa who fled to Singapore earlier this month after thousands of protesters stormed the presidential palace. He resigned on July 14.

Protesters, opposition politicians, the Buddhist clergy, the Church, journalists and lawyers all have good reason to be wary of the new president, a six-time former prime minister and a pillar of Sri Lanka’s political establishment.

They want an independent inquiry into allegations that Gotabaya Rajapaksa, his brothers and their wives stole billions of dollars and an asset recovery program but fear Wickremesinghe will protect a family that dominated political life here for 17 years.

Wickremesinghe had promised to form an all-party government but instead, he promoted close allies of the ousted president to his cabinet. That includes the former home minister and former Rajapaksa school classmate Dinesh Gunawardena who last week was named prime minister.

Tensions were again ratcheted up on Friday when the president ordered an unnecessary crackdown on protesters. Their camp outside the presidential complex was dismantled and protesters alongside journalists and lawyers were beaten and arrested by police and soldiers.

Human rights groups were outraged that what had been widely regarded as a peaceful movement had turned violent with the UN Human Rights Office warning Wickremesinghe that “the use of force against peaceful protesters runs contrary to international law.”

Catholic bishops also condemned the use of military force on unarmed civilians and journalists, saying this would “further exacerbate mass unrest and damage the image of the country in the international community.”

That followed yet another warning from the Buddhist clergy that “every sector of the country is crippled now” and that it was the responsibility of “the president and the prime minister to pay heed to the demand of the people and avert any more crises.”

The response to the government’s heavy-handed tactics should have embarrassed the new cabinet but instead, some even sought to blame the protesters for causing delays in talks with the IMF and the World Food Program.

Labor minister Manusha Nanayakkara even tried to convince the press that people camped outside the presidential complex were “protesters and insurgents who might plan to launch an armed struggle to capture power as they can never win elections. Our government will disarm these persons.”

Such nonsense from a Rajapaksa loyalist and a former journalist is self-serving and simply shirks the government’s responsibilities in dealing with the worst crisis this country has experienced since 1948 when Ceylon became an independent dominion of the British Commonwealth.

Importantly, Ceylon was renamed Sri Lanka in 1972 and a president imbued with ceremonial duties replaced the British monarch as head of state. But five years later a constitutional change resulted in the executive powers of the prime minister and parliament being transferred to the president.

Ganeshan Wignaraja, a senior fellow at the Institute of South Asian Studies at the National University of Singapore, said those executive powers had “been a bane on this country” and should be abolished with the president’s role restricted to ceremonial duties only.

“We have concentrated power in the hands of one or two individuals over time and these individuals sadly have not lived up to the litmus test of being good leaders as well as clean leaders,” Wignaraja said. “That’s been a real problem and the Rajapaskas sort of symbolize that.”

He said such change would prove tricky and needed to be made in conjunction with a raft of market-friendly reforms that would go hand in hand with an IMF package, cut red tape and open the economy to foreign trade and investment.

That, he said, should be backed by anti-corruption policies including asset declarations for all politicians running for parliament and “an anti-corruption office with UN assistance because I’m not sure we can do this ourselves due to political interference.”

Whether Wickremesinghe’s administration has the stomach for the reforms demanded to re-instill the lost confidence at home and abroad, needed to resuscitate a collapsed economy, will determine Sri Lanka’s fate. His 2024 deadline might seem a long way out but it might also fall short.

*The views expressed in this article are those of the author and do not necessarily reflect the official editorial position of UCA News.