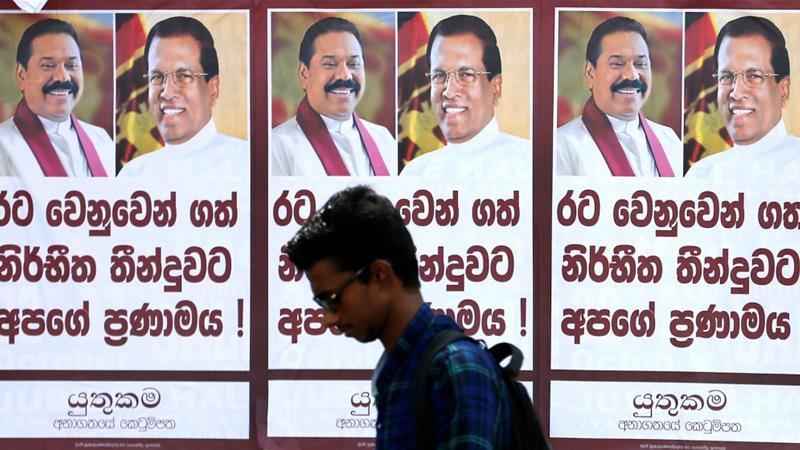 In a Sri Lanka Freedom Party (SLFP) electoral organizers meeting, President Sirisena proclaimed that he would not allow a federal state for the Tamils or merger of the North and East provinces. Reportedly, he had stated that “he would have to be killed” before this happens. The presidential statement brought a smile to my face because it had elements of humor. However, this is not a joke.

This is a serious matter.

The sacking of Ranil Wickremesinghe and the appointment of Mahinda Rajapaksa as prime minister by the President forced the United National Party (UNP) members and sympathizers to feel “betrayed.” They made him president in 2015. Some UNPers have been using interesting terminologies to express their outrage of President Sirisena’s recent actions. These sentiments are highlighted and discussed in multiple platforms. The Tamils were already feeling betrayed because they also voted heavily for him in January 2015.

Sirisena contested the presidential election as the “man of reconciliation.” In his election manifesto, he declared, “our country is now entering a decisive juncture in its history. Whether the country would turn towards becoming a haven for peace, prosperity, and reconciliation, or whether it would fall into an abyss of degeneration, instability and anarchy, depends on the way you, my fellow citizens that love our Motherland, will act today (p. 9). The President’s alliance with the UNP and his statements guaranteeing reconciliation, democracy, and good governance boosted confidence of the Tamil people.

They responded positively. For example, Sirisena received 74.42 percent of the votes in Jaffna (Rajapaksa 21.85%) and 78.47 percent of the votes in Vanni districts (Rajapaksa 19.07). One could argue that without the Tamils votes, Sirisena could not have won the presidency. The difference between Rajapaksa and Sirisena was only about 450,000 votes. A Tamil National Alliance (TNA) induced boycott, which some were calling for, would have cost Sirisena dearly.

Did the Tamils vote for Sirisena because of love and trust? Of course, not. It was an anti-Rajapaksa vote. It is imperative to note that the Tamils overwhelmingly voted for Sarath Fonseka in 2010. It is safe to assume that the Tamils would have voted for anyone who opposed Rajapaksa in 2015.

Nevertheless, the President owed something to the Tamils because he became president mainly (or partially) because of the Tamil votes. The President seemed grateful at the beginning. Consequently, he kept the responsibilities for national “reconciliation” under his ministry. The government took pride in the fact that the president himself was the minister in charge of national integration and reconciliation. Hence, this was a high priority area for the government was the argument. He proposed what was called the “national policy on reconciliation.”

Sirisena’s interest in national integration helped consolidate international goodwill towards the new government. At least, some Tamils believed that the President’s interest would lead to tangible benefits concerning political and socio-economic issues. However, not much happened in the first three years of the yahapalana government.

Meanwhile, the President’s interest in Tamil issues did not last too long. He transferred the subject of reconciliation to Mano Ganesan when the Cabinet was reshuffled in April 2018. The demoted reconciliation signaled the President’s declining interest in Tamil issues as his heart was with Sinhala nationalists. What was more concerning in this transfer was that the subject, once considered paramount in Sirisena’s agenda, was assigned to a Tamil minister. The history indicates that Tamil ministers more often than not offered nationally insignificant subjects and they are mostly powerless when it comes to national affairs. Despite Ganesan’s enthusiasm, it was clear that his ministry cannot undertake transformative measures.

It is against this backdrop, Sirisena now says that he should have to be killed before any political autonomy is granted to the Tamils. It is abundantly clear that Sirisena, as he says, will not allow any concessions to the Tamils. However, my concern is, why is he saying this now?

Is there an imminent danger of country becoming a federal state or is North-East being merged?

Absolutely not. The yahapalana government started what looked like an ambitious project to devolve power through constitutional reform. Parliament was converted into a constitutional assembly, a steering committee and a number of subcommittees were formed, and the subcommittees submitted their reports. And that was it. The process stagnated due to the South’s resistance to grant any concessions to the Tamils.

The TNA meekly accepted this position as the reality, and some United Tamil National Party members continue to buttress this state of affairs saying to the Tamil people that constitutional reform will become a reality sooner rather than later. They were wittingly misleading the Tamil people when in reality there was absolutely no possibility of the now defunct constitutional reform process to succeed. What this meant was that Tamil nationalism was working hand in hand with Sinhala nationalism.

This is one reason why Vigneswaran has formed his own political party, the Tamil Makkal Koottani (TMK) and he probably will lead a radical Tamil nationalist campaign. Vigneswaran could have a considerable impact on future Tamil politics.

The point is that President Sirisena at this point in time has no reason to say that he will not allow devolution or a merger of North-East. What he is doing is appealing to the Sinhala nationalists. In other words, he is trying to use racism for electoral gains. It was this kind of politics on both sides of the ethnic divide that led to the brutal ethnic war.

In a way, Sirisena’s recent transition from a man of reconciliation to a Sinhala nationalist makes sense because of his new alliance with Mahinda Rajapaksa and the Sri Lanka Podujana Peramuna (SLPP). Both of these entities are founded on Sinhala nationalist ideology. Therefore, in order to be with them and succeed, Sirisena had to be reborn as a Sinhala nationalist. Meanwhile, the Tamils feel that they were used like a condom.