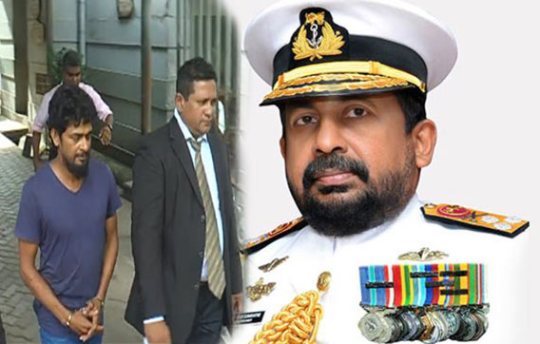 Even as the nation continues to be immersed in the current constitutional crisis of unprecedented proportion, possibly for any country in the democratic world, Sri Lanka has set another record – dubious or otherwise is for the future to decide! A subordinate court in Fort, Colombo, has remanded the incumbent Chief of the Defence Staff (CDS), Adm Ravindra Wijegunaratne till 5 December, in a case pertaining to the alleged disappearance of 11 youth during the long years of the conclusive ‘Eelam War IV’ against LTTE terrorism.

Coming as it does after the Police Commission had ordered the cancellation of Investigating Officer (IO) Nishantha Silva, Fort Magistrate Ranga Dissanayake’s remand order should come as a welcome relief to those that pray for an ‘independent, national investigation’ into allegations of ‘war crimes’. Or, is it over-stating expectations, if not the facts and circumstances of the case?

The case involves former Navy officer Prasad Hettiarachchi, the first suspect, who allegedly caused the disappearance of 11 civilians. According to media reports, D.S Tissera of the CID appearing with OIC Nishantha Silva, “made a lengthy submission” before the court that CDS Wijegunratne had attempted to shoot and abduct witness Laksiri Galagamage at the Naval Restaurant at Navy Headquarters. Earlier charges had also claimed that Wijegunaratne had helped in the cover up and temporary disappearance of the first accused, and is believed to have paid him huge sums of money through bank transactions, for the purpose.

These are issues that needed court investigation, findings and may not end with the trial court. Instead, either way, it could go all the way up to the Supreme Court, where alone it might rest. It could take years, but then it would have set a precedent and process, to tell the world that Sri Lanka cares – cares not only for international applauding or opprobrium as the case may be, but also for how justice should be meted out to ‘war victims’. Or, so it seems.

As media reports also have, Wijegunaratne had reportedly written to Inspector-General of Police (IGP), Pujith Jayasundera, earlier, to claim that IO Silva was an ‘LTTE supporter’. There have been such reports about serving officials also of the armed forces through much of the ‘war decades’, but the question is if the said investigation officer was one of them. In legal terms, even such an approach to the court could not divest the responsibility of the suspects/accused in the present case to present evidence against the current charges against him, if they hope to be acquitted of all charges.

Any charge against a serving CDS in a criminal case of the kind would draw a parallel in those that the predecessor Mahinda Rajapaka regime had foisted on ‘war time’ army chief, Gen Sarath Fonseka. There are differences, though. Those differences relate to one of position and of the nature of the charges.

One, Fonseka was not in service when charged, convicted, jailed and even cashiered, though he is by far the most colourful chief of any wing of the tri-Services in Independent Sri Lanka, or even earlier. Two and more importantly, none of the cases against Fonseka, now freed and decorated as the nation’s first ‘Field Marshal’, related to ‘war crimes’ probe of any kind.

There have been occasions in the past, especially in the sixties, when serving officers of the uniformed forces had been hauled up for plotting a coup to try and overthrow the elected civilian Government. That did not go too far, but then the ranking officers charged with the coup conspiracy were also from lower ranks – not at the level of the CDS, which post anyway did not exist at the time.

All this does not mean that Adm Wijegunaratne could be convicted through a media trial or any such course. Thankfully, the media, starting with the irresponsible and unaccountable sections of the social media, are too busy with the ‘constitutional crisis’, with the result they have no time for the CDS case, or any other ‘war crimes probe’ of any kind.

The same could be said of the ‘victimised’ Tamil polity and society. Either they are too busy with the ‘constitutional crisis’ and the way the ‘majority Sinhalas’ have ‘cheated’ them all over again, or are too cautious to spell out a position on the ‘CDS case’ that they are keeping their counsels to the themselves on the same.

The best or the worst could be said of the Government leadership, which in the garb of the prosecution, sits on the other side of the accused in every other criminal case tried and adjudicated in the land. In this case, too, the Government remains a silent spectator, though the efforts to have IO Silva transferred out, too could be attributed to certain arms of the very same Government – official, if not political.

Yet, the question remains if the Government leadership, especially political, could have done well, to facilitate an honourable exit for the office of the CDS, by directing the incumbent to step aside until he had gone through the court processes. If nothing else, the Government could have advised CDS Wijegunaratne to cooperate with the CID in the investigation of the case, and not stay stubborn by not appearing for inquiry and the due processes.

At the end of the day, the CDS’ conduct pertains to the form and propriety of a civilian court ordering the remand of the person in the highest-ranking office in the uniformed services, the nation’s pride, post-war in particular. It is another matter that the current remand also pertains only to the CDS’ refusal to cooperate with the investigators, and not in relation to any serious crime alleged to have been committed by him, as levelled against A-1 in the case.

In a way, the temptation would be for sections of the nation’s political Establishment to tell the ‘international community’ (read: West) that they have lived by their global commitments on a ‘credible war crimes probe’ without having to involve ‘international jurists and lawyers’, as committed in the co-sponsored 2015 resolution at the UNHRC, Geneva. But they should ask themselves if it was all to it, and if the pride of the nation, especially ‘individual soldier’, has not been hurt already by the criminal action initiated against their CDS, who in a way is only next to the ‘Supreme Commander’, the President.

The question thus arises if the Government should have handled such ‘war crime cases’ with greater sensitivity by appointing independent commissions to launch a pre-prosecution assessment of individual cases, before taking them to the criminal courts. It is even more sad that no one in the system had thought of setting up ‘Special High Courts’, maybe with Appeals Court Judges presiding, to hear the ‘war crimes probe’. They have all the imagination and initiative to set up such courts against their political opponents, on ‘corruption cases’ from the past, after all!

This is not to attribute motives of any kind against the existing system, starting with the subordinate judiciary. Far from it! If at the end of the day, the trial court or any other along the route ended up acquitting the accused, one or many, in this case or any other ‘war crimes probe’ of the kind, then the ‘victimised’ (?) Tamil polity should not climb up the tree all over again, and cry foul, post facto!

The irony is that embassies of western nation that did not lose a wink while commenting on the ‘constitutional crisis’ have no word, good or bad, about the ‘CDS trial’ or anything of the kind. Maybe, they want to be seen as ‘not interfering in the nation’s judicial processes’ though would not mind doing so in the ‘constitutional processes’, whatever they be. Maybe, at least some of them would want to draw a political judgment on a more suitable day, when they could go back to Geneva, and cry foul, all over again.

There are reasons to be impartial in the nation’s approach to pending court cases. After all, the international community that joined hands with the political Opposition to the Rajapaksa regime when the latter had Parliament impeach then Chief Justice Shirani Bandaranayake, is silent now. Even the otherwise active sections of the traditional media and the social media are near-mute in reporting a trial court recently convicting the ‘re-instated’ former CJ’s husband, Prasad Kariyawasam.

According to media reports, the Colombo Chief Magistrate’s Court convicted Kariyawasam, an ex-Chairman of the National Savings Bank (NSB), for illegally allowing the purchase of over-valued shares of a finance company. The impeachment proceedings against CJI Bandaranayake had claimed that she had tried to intervene in her husband’s case.

However, on the specious plea that Kariyawasam had no previous criminal record, among other submission, the court has stopped with a five-year suspended sentence and a fine of SL-Rs 300,000, not a very common form of sentencing in the country, as in some of the western nations.  Yet, even a week after the court order, the Rajapaksa camp is shy of citing a possible ‘post facto justification of the impeachment’ (???) in public, also because they are now caught in the ‘constitutional crisis’ of President Maithripala Sirisena’s making, of which they are a major part!

Then there is the other recent incident, of two policemen being shot dead in eastern Batticaloa. Media reports quoting investigators claim that former LTTE cadre(s) was/were involved in the killing. If found true, any demoralisation of the forces in the light of the ‘CDS case’ and remand, could have consequences for the nation, which no one seems to be vetting or feeling, just now. Again, no one from the West has found time to comment on the same, either, or do something about the pro-LTTE Diaspora, back home!