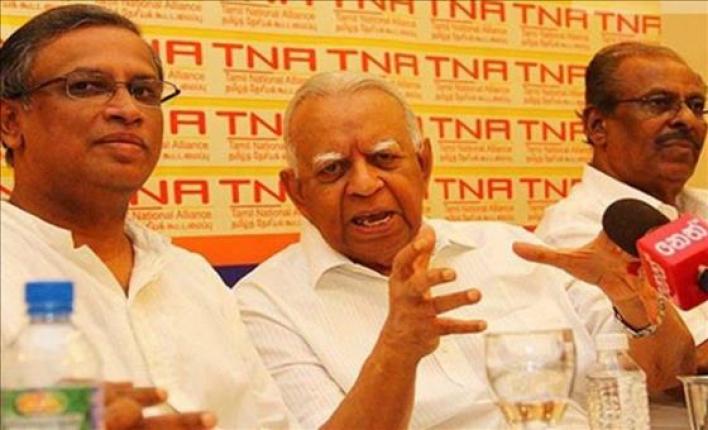 Chased by the Police, four robbers entrust their night’s loot to an old lady, with the instruction that she should return it only if all four of them came together.

A week later, one of them appears at her door-step and talks the innocent lady into handing over all the stolen property to him.

When the other three appear before her some days later, they are angry at her. When they persist with her to return the goodies, no, she did not threaten them with going to the Police. Instead, the smart woman reminds them of their own instructions to her when they handed over the loot, she tells them, “Now, you three go and come back with the fourth man. Then, I will give you what you are asking for now.” With that one, she hangs her door on the greedy men, who go away, looking for the greedier one….

This apocalyptic story, viz the three bad men, is also today the fate and future of Tamil politics in the country, especially after the 5 August Parliamentary polls. All that any Government in office has to do is to tell the Tamil parties seeking a political solution to the decades-old ethnic issue is to “go discuss it among you all Tamil parties, come up with some common demands and negotiations points among you, then we will also sit down as a Nation and find a negotiated settlement….”

The Tamil parties that have won seats in the new Parliament are not going to find any common ground among themselves, to be able to put up a common face before the Government, the Opposition and the Nation at large. Then, the caravan will pass on and the next Presidential and Parliamentary Elections will be up on the Nation and on themselves, too.

In between, the Provincial Council polls too will be there for the Tamil parties to fight among themselves. Cornered, intelligent people will use the occasion to bury the past, good and proper, and strike a new deal. That may also be the one last – or, one more lost – opportunity for them to come to terms with the ‘new normal’ after the Parliamentary Polls, Expanding it all by talking to anti-Government Muslim parties and at times the post-Thondaman Upcountry Tamil polity in the Opposition, too, may have to wait.

What the TNA cannot forget is that Angajan Ramanathan, from the Tamil-majority Northern Province, is now the sole ‘blue-blooded’ SLFP member in Parliament. His victory especially should give ‘national parties’ (read: Sinhala majors), some hopes about their return to the centre-stage, even if the Nationally-failed UNP may still have hoped for a seat from the North.

Angajan is the first SLFP Parliamentarian from the North after Alfred Duraiappah, who is better remembered as Jaffna Mayor, who became LTTE Prabhakaran’s first victim – or, was said to be so – in 1975. In the post-Vaddukottai Presidential polls of 1982, SLFP’s Hector Kobbekaduwa came second after ACTC’s Tamil candidate, Kumar Ponnambalam, pushing incumbent President J R Jayewardene, to the third place, in Jaffna district, that is.

Once the results were known this time, TNA spokesman and MP-elect M A Sumanthiran was the first to sound the bugle for Tamil unity. Promptly did ACTC’s hereditary boss, Gajendrakumar Ponnambalam, son of Kumar Ponnambalam and grandson of C G Ponnambalam, shot it down. He said that they could not work with parties who cannot stand up to his ACTC’s ideology. After the long-awaited and even more encouraging Parliamentary Poll results, he is going to do more of such tough talking.

SLPP, National Organiser Basil Rajapaksa has said the TNA was no more the ‘sole representative’ of the Tamil people, and they now have to talk to all Tamil parties. TNA boss, R Sampanthan’s retort that they continued do so sounds hollow. This is the first of the inter-party Tamil conflicts they will have to address, if anyone were to take up a re-unification move of whatever kind.

Today, not only has the TNA lost Parliamentary strength, from 16 to 10, including one ‘National List’ seat, it has also lost out in poll percentage. In both the North and the multi-ethnic East, they have non-TNA Tamil candidates who have recorded more votes than their nominees. In heartland Jaffna district, Angajan Ramanathan came first (37,000 votes appx), followed by TNA’s S Sritharan (36,000 appx) and EPDP’s Douglas Devananda (32,000 appx). Then came Gajan Ponnambalam with 31,000-plus votes. The first of the TNA’s three victors, Sumanthiran, with 27,000 votes, is (only) the next in the line.

In the Eastern Province, the TNA lost one or two of the traditional ‘Tamil seats’ in the multi-ethnic Ampara district. It can blame it on the SLPP’s acknowledged strategy of fielding one-time LTTE regional commander and later-day Rajapaksa Minister, Vinayagamoorthy Muralidharan alias ‘Col’ Karuna, as his own candidate at the head of an ‘Independent’ group.

Karuna’s one-time aide and the first post-Eastern Province Chief Minister, Sivanesathurai Chandrakanthan, better known as Pillaiyan, is now the Tamil MP with the highest number of Tamil votes (54,000 appx), in eastern Batticaloa district. Pillaiyan continues to be in prison as an ‘under-trial’ for the past nearly five years, for his alleged role in the 2005 Christmas night LTTE assassination of TNA Parliamentarian Jospeh Parrarajasingham, at the local church.

Does it now mean that Pillaiyan’s popularity is owed to his forgotten tenure as TMVP Chief Minister and governance? If so, is it also further proof that the Northern Tamils ‘punished’ the TNA for the bad governance of their Chief Minister, C V Wigneswaran, now a rebel leader (2013-18). Wigneswaran scraped through to win a Parliamentary seat in Jaffna district, polling a low 21,000 votes against his unmatched, record ‘preference votes’ of 132,000 in the PC polls of 2013. The controversial Ananthi Sasitharan, with 88,000 votes came a distant second then. Over-exposed, she lost the Parliamentary Polls, badly.

In the North, TNA’s ITAK mainstay president, Maavai Senathiraja, lost very badly, after being in Parliament for very many terms. In the East, Sampanthan too could have lost his seat if a few thousand more votes had played truant. The fact is that this Election has rendered TNA increasingly irrelevant, or has stripped it of artificial legitimacy of being the ‘sole representative’ of the Tamil people, post-LTTE.

On the one hand, the Election has split the TNA vertically. On the other, it has divided the ITAK leader of the TNA combine even more. The ITAK’s ‘House’ symbol, ‘given’ by party founder, S J V Chelvanayagam, does not sell with the post-war generation, and there are greater chances of existing TNA allies, namely, in the PLOTE and TELO, asserting themselves more than ever.

It should surprise no one if either or both of them decided to walk out on the TNA even ahead of the Provincial Council polls, whenever held, blaming it all on the internal feud in the ITAK, The possibility of a honest patch-up that will hold within the ITAK does not look a possibility. If nothing else, there would be a new quarrel over the Northern Province Chief Minister candidate.

It is not unlikely that party boss, Maavai, who has lost even the party’s lone ‘National List’ seat to Sampanthan’s customary cunning, throws his hat into the ring. There are the likes of PC Chairman, C V K Sivagnanam, who did not press their deserving claim for a Parliament ticket only with an eye on the Chief Minister’s post.

It all can begin with the ITAK central council meeting, which Maavai has said he would call soon. Rather than introspecting on the causes of the party’s poor poll showing, they are sure to fight over the National List seat, which has since gone to a relatively lesser-known face, T Kalaiyarasan, without internal consultations. Other TNA partners could be expected to seek a meeting of the TNA presidium, if that is what it is, to discuss the very same issue, as they are even more upset at the unilateral ITAK / Sampanthan decision.

Sampanthan has said this is his last Election. The internal TNA feud for succeeding him began pre-poll, or months earlier. Left to themselves, even before the PC polls, the leaders are capable of ensuring that there is neither a TNA, possibly not even an ITAK worth the name.

Inside the new Parliament, whenever the ethnic issue crops up, the Tamil parties can be expected to indulge in a shouting match. If there is more left, then they all, jointly and severally, will end up doing so vis a vis BBS boss GnanasaraThero and other Sinhala-Buddhist hard-liners, taking the issue proper nowhere….

The question among the Tamils now should be, one, how is the TNA going to make the Alliance and the ITAK ship-shape? Two, who is going to make all Tamil parties, especially those sitting in the Opposition, together? The last time the TNA achieved substantial progress in political negotiations with the post-war Rajapaksa Government in 2011-12, two forces acted either in tandem or independent of each other.

The so-called civil society in the North questioned the TNA’s motives and methods, and a self-styled stake-holder meeting convened by the then Mannar Bishop stalled all progress on the negotiations front. Two, a section of the TNA claiming that their pressure was behind the US-led UNHRC resolution on war-crimes probe at the UNHRC. In between, there were Tamil participants at the Government talks who seemingly leaked the proceedings to those ‘outside’, possibly from the venue.

The TNA’s dual-face came out when under Rajapaksa earlier they would have only one-to-one talks with the Government, and not multi-party negotiations, either in Parliament or outside.Under the successor so-called Government of National Unity (GNU), they readily agreed to a new Constitution Assembly. A Constitution Assembly, whose UNP author used it only to deflect issues and buy time….