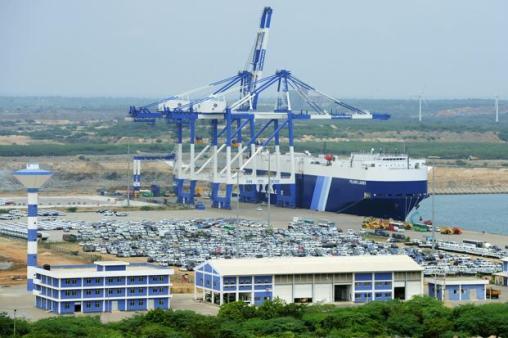 Colombo’s attempt to balance India and China has proved futile.

By Ana Pararajasingham
September 09, 2017
Addressing the Indian Ocean Conference in Colombo on August 31 this year, Sri Lankan Prime Minister Ranil Wickramasinghe was confident that Sri Lanka is poised to become the “Hub in the Indian Ocean.” That was not all, with air and sea connectivity it was only a matter of time for Sri Lanka to emerge as a center for offshore finance, a competitive manufacturer, and service provider. The prime minister’s assessment was made in the context of the island’s strategic location in the Indian Ocean, its two international airports and several ports dotting its 1,340 kilometer coastline.

It was a promising picture.

While Colombo does possess several ports and two international airports, the control of major ports and the second international airport located in Matara is severely undermined by the involvement of China and India. The rationale for the involvement of these two Asian giants in the operation of Sri Lanka’s ports is not economic but strategic. Therein lies Sri Lanka’s predicament: It has little control over all its ports.

The management of Hambantota port is no longer under the direct control of the Sri Lankan state. Its operation is controlled by China via its state-owned company, China Merchants Ports Holdings. Beijing, having “invested” around $1.6 billion in building the port, reaped the benefits when Colombo was unable to make repayments on the “loan” and was thus forced to sell a 70 percent stake to the China Merchants Ports Holdings, which is to operate the port over a 99-year lease. The formal agreement was signed on July 31.Then there is the white elephant, Matara’s International Airport, dubbed “The World’s Emptiest International Airport” is also located in the Hambantota district. The airport was built at a cost of $209 million of which $190 million was in the form of loans from China. The airport was unable to generate any business because of its remote location out in the jungles of southern Sri Lanka devoid of infrastructure or even much of a resident population. In August 2017, India offered to purchase a 70 percent stake in the dysfunctional airport over a 40-year lease  It was an offer very similar to the one that saw Hambantota port come under Chinese management. Obviously, India’s offer was not driven by economic goals given the airport’s remote location. But, coming as it did within weeks of Sri Lanka’s agreement to grant control over the Hambantota Port to the Chinese, there are good grounds to regard the offer as an Indian initiative to counter the growing Chinese presence in southern Sri Lanka. Colombo is reportedly viewing the Indian offer separately from the other seven proposals (including a proposal from China), implying that New Delhi is being assertive in its quest for the port.

India has a presence in the northern Sri Lankan port of Kankesanthurai (KKS) where it has been involved since June 2011 mapping, as well as removing and disposing vessels sunk during the civil war. However, India’s primary interest lies in controlling the eastern Port of Trincomalee. In early February 2017, India made this clear during a Carnegie (India)-hosted event in Colombo titled “Trincomalee Consultations.” In late April, when New Delhi invited the Sri Lankan prime minister on a five-day visit to India, the Indian Ministry of External Affairs, in announcing the visit emphasized that discussions would take place around operating a major oil-storage facility and  a Liquefied Natural Gas (LNG) plant in Trincomalee in addition to developing the port of Trincomalee  as a key transit point. In May, when the Indian Prime Minister paid his second visit in two years to Sri Lanka, it was reported that India would take up the issue of China’s growing influence in the island with Sri Lanka. New Delhi could not have made its intentions more clear.

China’s interest in Sri Lanka’s ports is said to be driven by its “One Belt, One Road” project establishing new trade routes linking China with the West by road and sea. India, however, is inclined to view Chinese presence in Sri Lanka in terms of the “String of Pearls” theory implying that Beijing’s interest is driven by its goal to encircle India. As such India looks upon Chinese presence as a threat and is therefore likely to continue exerting pressure on Colombo for a greater role and an enduring presence.

Neither of the powers is likely to give up on their goal of bringing Colombo within their own sphere of influence. China has the wherewithal in terms of financial resources and has considerable support amongst Sri Lanka’s political establishment suspicious of India’s expansionist intentions. New Delhi counts on its geographical proximity, U.S. support ,and exploiting Tamil grievances to arrogate a role for itself. Colombo’s attempt to balance by playing these powers against each other has proved futile. Instead, Colombo’s sovereignty has been greatly compromised as it is forced to serve two masters.

Ana Pararajasingham was Director-Programmes with the Centre for Just Peace and Democracy (CJPD). He is the author “Sri Lanka’s Endangered Peace Process and the Way Forward” (2007) and editor of “Sri Lanka 60 Years of ‘independence and Beyond” (2009).