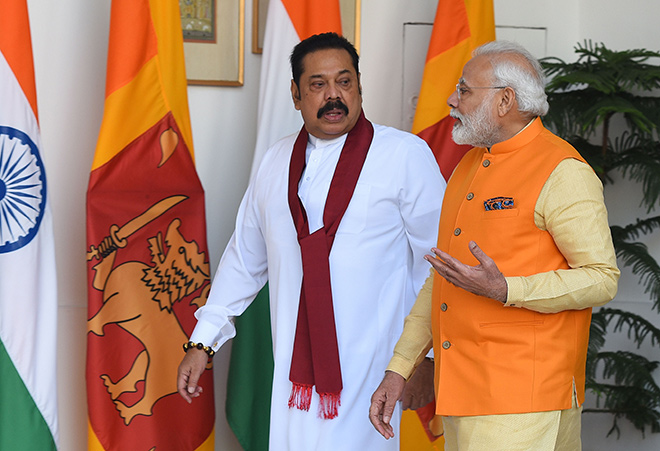 In the first Sri Lankan official reference to the nation’s ‘India First’ security policy after the 28 October Colombo visit of US Secretary of State Mike Pompeo, Sri Lankan Foreign Secretary Adm Jayanth Colombage (retd) quoted President Gotabaya Rajapaksa as telling the visitor that “as long as I am in power, I will never allow to harm India’s strategic interests”.

In the same vein, Colombage told a webinar, organised by the Asia Confluence, a Shillong-based think-tank, that India too needed to imbibe the message that Sri Lanka will not undermine the nation’s strategic security. “Our President and our government have been reiterating this again and again and again,” he quipped.

During his first overseas visit to India after becoming President last November, President Gotabaya reportedly told Prime Minister Narendra Modi that his government would follow an ‘India First’ foreign and security policy. Colombage said as much after taking over as the Foreign Secretary in August this year.

“We will not, we cannot be, we should not be a strategic security concern to India. Period,” Colombage said at the webinar. “We have to understand the importance of India in the region and we have to understand that Sri Lanka is very much in the maritime and air security umbrellas of India. We need to benefit from that,” he said, reiterating his nation’s position as he had delineated earlier, and almost to the last word.

Together, all of it seems to indicate Sri Lanka’s possibly growing impatience at having to prove itself on what it wants New Delhi to believe is Colombo’s unilateral commitment to the nation’s ‘India First’ security policy. The fact that President Rajapaksa took it up with a top official of a third nation, even if it is the US, could also imply that Colombo wants no third-nation, non-regional power to interfere in the affairs of Indian Ocean security. Neither Sri Lanka, nor the US, has publicised anything about exchanges in this regard at the high-level talks.

In the webinar, Colombage, who is also a scholar and author on security affairs, expressed Sri Lanka’s concern over the four-nation Quad, involving Australia, Japan, India and the US. “We are watching what is happening in the Quad. Do we really need a quad? Will Quad not give rise – not to a cold war – but at least a cool war in the Indian Ocean? These are some of our concerns,” he said.

Colombage quoted India’s External Affairs Minister Dr S Jaishankar that  the Quad is a very natural evolution outcome of a more multipolar world. “Well, if (there is) a more inclusive multipolar world, Sri Lanka as a small country will be very, very happy,” he added. These are (exclusive)  preserve of “major powers” in Indian Ocean, and/but Sri Lanka (a littoral nation) did not have any say in such things, he quipped, wryly – or, what seemed so in context.

For the Indian strategic community in the neighbourhood, such observations could imply that Sri Lanka, a key littoral nation in the Indian Ocean littoral, was neither consulted nor kept informed of the forming of the Quad. As Secretary Colombage, a former chief of Sri Lanka Navy (SLN), stated, the nation was at the intersection of two strategic policies in the Indian Ocean. “Unfortunately, or fortunately, Sri Lanka is at the crossroad of both”, namely, China’s BRI and America’s Indo-Pacific.

In this context, Colombage said that his nation was “very conscious of the militarisation of maritime …. It is a fact that from 2009 till now, 550 warships from 28 countries have visited Sri Lanka. That is a huge number. That is an indication of how militarised this region has become”.

The year 2009 was when the ethnic war in Sri Lanka ended, and the LTTE, with its powerful ‘Sea Tigers’ naval wing was completely neutralised, both on land and equally so in the seas. Incidentally, the figure that Colombage quoted was a result of then President Mahinda Rajapaksa’s — now the Prime Minister — ‘Mahinda Chintanaya’, or ‘Mahinda’ Thoughts’ poll manifesto for his first-term election in 2005.

The manifesto promised to make Sri Lanka a naval and maritime-hub, to be able to create jobs, family incomes and government revenues, in the services sector. In turn, this was an implied acknowledgement of the nation’s limited scope for setting up manufacturing industries, for job-creation and revenue-generation.

Read between the lines, Sri Lanka continues to be peeved at being taken for granted in matters of what Colombo seems to be perceiving as ‘militarisation’ of the neighbourhood Ocean. The message is clear: “You big players do it all in our backyard, and if it hurts any one first, it will be us, it will be us.”

This much became obvious when Colombage reiterated that Sri Lanka was a “neutral”, “non-aligned” country. As he has always been saying,  “We don’t want to be caught in this power-game.”

In yet another disclosure on some of what had transpired at Gotabaya’s high-level meetings on the subject, Colombage clarified that the President had conveyed this message to Secretary Pompeo and also the visiting Chinese delegation, led by Yang Jiechi, a top-ranking foreign policy official, last month.

India’s strategic community needs to read Colombage’s frankness in opening out, as he has been doing since taking over as the Foreign Secretary, in context and content. The trouble on this score was waiting to happen almost from the day the government of Prime Minister Manmohan Singh hurriedly signed a defence pact with the US in 2005 without taking smaller neighbourhood nations into confidence.

The ‘unilateral creation’ of Quad with implications for ‘helpless, hapless’ small Ocean neighbours like Sri Lanka, according to some sections of the Sri Lankan strategic community, has become a core concern for the nation’s foreign and security policy-makers. To some, it also indicates that India, despite being a large and most powerful nation in South Asia, both in political and military terms, has been ‘taking us all for granted”.

Some in the Sri Lankan strategic community, who have been avid India-watchers from before the ‘Bangladesh War’ (1971) and later the ‘forced induction’ of IPKF (1987), point to the existence of a national consensus on security and strategic issues within the country, especially among Sinhala political parties with possibilities of coming to elected power – just as in India, “where the incumbent Government of Prime Minister Narendra Modi is (only) taking forward the initiatives of ‘post-Cold War’ predecessors”.

If the question is about Sri Lanka offering Hambantota port contract to China, they are not tired of pointing out how it was offered only to India – and more than once. According to them, successive governments in Colombo at least from those days have been consciously keeping India’s security concerns in mind and have been working accordingly.

In this context, they argue that once India had showed dis-interest in investing on Hambantota, New Delhi cannot dictate whom we approach for funds and on what terms, especially when we guarantee that we would protect India’s security interests, which also ‘coalesces with ours’. According to them, “Anyway, then or now, only China has disposable funds for investments, and not one nation or international organisation that has reservations about Hambantota or other nice-funded projects in our country has ever offered that kind of funding…”

Colombo-based Sunday Times reported (1 November 2020) that the public sector Sri Lanka Port Authority has since handed over the management of Colombo Port’s Eastern Container Terminal (ECT) to India’s Adani Group. The tri-nation project, which included Japan, was left hanging after the Rajapksas returned to power, but Colombage in his first interview as the Foreign Secretary said that they understood New Delhi’s  reasoning as India accounted for 70 per cent of the port’s business.

In this overall background, the question arises why New Delhi chose not to take the ‘more friendly’ erstwhile Wickremesinghe leadership into confidence on a Quad-like security decision. Also, as Secretary Colombage said, quoting Jaishankar, if there is more to Quad than security cooperation among the four nations, the partners should have been more transparent on those matters, and should have also engaged other Ocean littorals like Sri Lanka, to convince them that there was no hidden agenda.