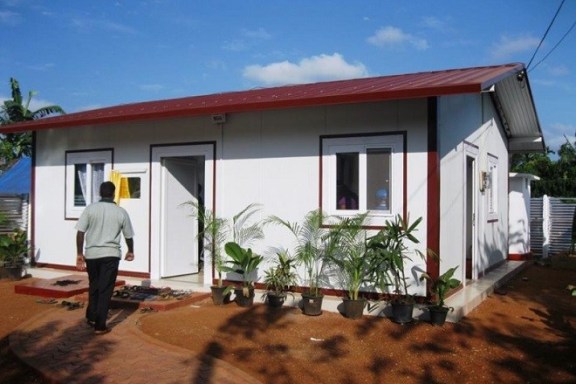 NewsIn.Asia    ArelorMittal prefabricated house using steel but no bricks or cement. Project abandoned after public said it was not habitable.

“Mankind has a perpetual and restless desire for power, a desire that ceases only in death” Thomas Hobbes

India is concerned by growing Chinese influence in the North and East of Sri Lanka. Some of this concern stems from a housing project recently awarded by the Sri Lankan Ministry of Resettlement, Rehabilitation, Northern Development and Hindu Religious Affairs to a Chinese construction company to build 40,000 houses in the North-East of the island. This infrastructure project – reflecting the Sri Lankan state’s development agenda, but to be carried out in significant part by China – will be a  security concern for India.

Fueling this concern was a speech delivered by the Chinese Ambassador in Colombo in May 2018. At a symposium titled From Millennium to the New Era: Jointly Build the Belt and Road and Embrace the Sri Lankan Dream, had stated China’s aims to boost Sri Lanka’s infrastructure as part of the former’s long-term global initiatives.

According to Vinay Kaura’s recent commentary, part of attempts to offset China’s presence in the island, the Indian government has used the Indian C-17 Globemaster aircraft to bring Sri Lankan military personnel and their families to the Buddhist site Bodh Gaya in Bihar. Commentator has noted that this act of military-cultural diplomacy is aimed at drawing Sri Lanka back towards India’s traditional sphere of influence. Given this, the importance of Sri Lanka’s delicate balancing of these spheres of influence will be part of its idealist foreign policy. However, a realist lens suggests balancing will be a challenging task and sometimes unachievable.

China’s efforts to project power through infrastructure development and mega projects also extend underwater. For 60 years it has developed strategic nuclear submarines, nuclear attack submarines, and conventional submarines organized into submarine bases and flotillas. It has also constructed PEACE (Pakistan East Africa Cable Express),a submarine cable reaching Djibouti and Gwadar in Pakistan, many African cities, and ends in France. Laid by a Chinese company, the cable carries upto 60 terabytes per second,creating a new information super-highway. The first stage to this ambitious plan was enhancing connectivity between the Western Indian Ocean and Europe.If a second stage comes to pass, it will likely connect the Eastern Indian Ocean – encompassing Sri Lanka, Bangladesh, and Myanmar –  with east Asia. The ring of the Chinese development reverberates through continents and oceans from east Asia to Europe.

According to international security analyst Ewen Levick, “Beijing is seeking new ways of intimidating or spying on other states.”This could occur through targeting vulnerable telecommunications cables criss-crossing the ocean bed that carry 98 percent of global internet and phone data and 95 percent of American strategic communications.

While China is expanding its global foot print developing infrastructure, across the world, internal political struggles are rife.The liberal values and norms upheld by US hegemony which undergirdthe international order are being questioned. The withdrawal of the US from the UNHRC revealed a sinister ethos behind the global decisions taken by the Trump administration. In response to tariffs imposed by the US on EU goods, EU import duties on US products have also opened another dialogue between China and the EU,which have agreed to form a group to update global trade rules. Trump’s weak policies recall Noam Chomsky’s 2006 characterization of the US as a ‘failed state’due to deficit of democracy. Chomsky refers to President Bush, who redefined what a failed state looks like, “the failed state include all aggressive, arbitrary or totalitarian states those with democracy deficit, lacking the institutions that work to fulfill the principles of democracy which Chomsky argues that the description fits US itself due to deficit of democracy”.

In Sri Lanka also deficit of democracy got the previous government out of office two years before the tenure. The change to the previous regime was based on not adhering to well defined limits of power and not respecting the limits of power. During the last presidential election the polity was in favour of policies geared towards recalibrating the Executive, legislative, and Parliamentary powers and define clearly its boundaries to reset the centralized authority of individual power towards the institutions. Today,three years later there is a tendency the same polity has decided to revisit what was lost and resurrect the centralized authority, shaming the executive who pruned his own power as a failure of delivery. Political discourse is shifting towards the next presidential election. Local voters may then create an enforcer, in the manner of Thomas Hobbes’ 17th century Leviathan, in the hope that life will be better with more centralized power than is presently the case.

The willingness of people to move to a stronger centralized authority could turn into a nightmare within a token democracy. In an expression of politics through religion, a Buddhist monk in a private religious ceremony called upon former Defence Secretary Gotabaya Rajapaksa to resurrect the authoritarian role he once carved out for himself and delivered results. This statement drew national attention and criticism from many camps. Many speak of the possibility of a presidential bid by Gotabaya Rajapaksa’s for 2020, but a decision is yet to be made formally by Rajapaksa himself.

Apart from geopolitical influence Sri Lankan polity in the next presidential race is certain to grapple with the twin thoughts, creating a centralized leader or a leader who believes in separation of power between the executive and legislature. As Lock’s Second Treaties of Government states, It is also worth to remember due to human fragility abuse of power is certain if powers are vested in one individual. The Island nation has experienced this in the past. To the pursuit of authoritarianism through the ballot,is a section of Sri Lankan voters, actively consenting to the rise of a Leviathan?