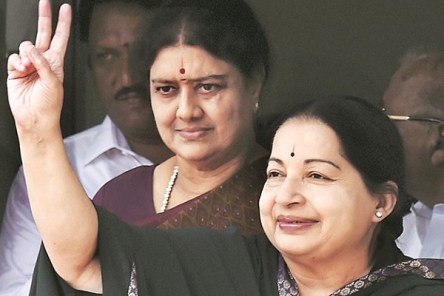 The All India Anna Dravida Munnetra Kazhagam (AIADMK) General Council on Tuesday adopted a resolution to sack VK Sasikala from interim General Secretary post. “Late J Jayalalithaa will be the permanent GS of the party,” the resolution said. It also abolished the GS posts.

In a bid to end confusion over the appointments and removals made by ousted TTV Dinakaran, another resolution declared that office bearers appointed by late Party supremo J Jayalalithaa would retain their posts.
The meeting also adopted a resolution to retrieve two leaves symbol frozen by Election Commission. It also ratified merger of O Panneerselvam and Edappadi K Palanisamy factions. The meeting also created new posts – Convenor and joint Convenor to coordinate the party affairs. Panneerselvam will be the Convenor, and Edappadi K Palanisamy will be Joint Convenor.

The powers of General Secretary will be given to Convenor and Joint Convenor and from A and B (election affidavit) will be signed together by EPS and OPS.

AIADMK factions led by Chief Minister K Palaniswami and rebel leader O Panneerselvam came together after a bitter split about six months ago and announced the merger.

It was as if Tamil Nadu was being treated to a morning show of its favorite prime time reality show Bigg Boss on Tuesday. With the voting rights vested in the 2,140 members of the AIADMK general council and 290 executive council members, VK Sasikala was finally eliminated from the House where she had stayed as captain aka interim general secretary for close to 35 weeks. In the meantime, the producers of this real life political reality show that started on 22 September last year, the night J Jayalalithaa was admitted to Apollo Hospitals in Chennai, had summoned Sasikala’s proxy TTV Dhinakaran several times into the confession room, asking him and his aunt to leave the House on their own.

When several eviction notices did not bear fruit, the party decided to resort to strong-arm tactics, with the muscle power in the form of numbers carrying out the ouster.

With this, the Panneerselvam-Palaniswami united faction has bitten the bullet. The decision ran the risk of desertions from the ruling camp, but it is a calculated risk. The ruling camp believes the Dhinakaran camp will not see a significant rise in numbers and many of the Mannargudi family loyalists over the past couple of weeks have been identified and wooed. These were the sleeper cells about which Dhinakaran kept bragging and he may find to his dismay that he no longer controls the password to activate many of them when the time comes.

The visuals from inside the meeting venue — where the decision to sack Sasikala was taken, followed by thunderous applause — will upset Dhinakaran. For the family that thought it owned the AIADMK, it was visual proof of the coup that had unseated them.

Rewind to December 2016, when as soon as Sasikala was elected the interim general secretary, banners with her photograph came up at the meeting venue to signify the new power regime. Then just about every AIADMK leader stood in line to fall at her feet, their backs suitably bent. On Tuesday, the rug was pulled from under Sasikala’s feet by the same combination of leaders.
What was unveiled in Chennai was a sequel to the turbulent month of February when OPS revolted against Sasikala. ‘AIADMK Returns’ has a new cast, with the late Jayalalithaa as the permanent general secretary. It is political insurance for the OPS-EPS duo to take all decisions in the name of Jayalalithaa, as it will help curb dissidence. Power will be vested in a steering committee with OPS and EPS to head the party.
What will this mean for the AIADMK? The plan is to project OPS and EPS as the inheritors of the Jayalalithaa legacy and portrays the Mannargudi clan as a group that was shown the door in the past by the former chief minister.

In the revolving door culture of the AIADMK, EPS who was appointed as chief minister by Sasikala has now officially stabbed her in the back to join hands with friend-turned-foe-turned-friend OPS. Unsurprisingly, Dhinakaran is seeing red and has vowed to “send the government packing.”

But can he? That is the question. While all resolutions passed by the general council will have to pass the legal scrutiny of the Madras High Court, the bigger challenge for Dhinakaran will be to carry out his threat. The DMK is likely to go to court this week asking for a floor test on the plea that technically, the EPS government is short of a majority by at least four MLAs. Dhinakaran’s future — and with it, the future of the Mannargudi family — will depend on whether he can together with MK Stalin, upset Palaniswami’s applecart. If they cannot, it will be political sunset at least in the immediate future for Dhinakaran.

The question is whether Dhinakaran, who claims to have the support of 21 lawmakers, can hold on to his strength. Many of the AIADMK legislators admit that chances of re-election are slim, given the dirty linen the party leaders have been washing in public all through 2017. So the urge to make the most of the next three-and-a-half years in power will be seen as a huge incentive.

Dhinakaran, it would seem, is also losing the perception battle. His aim to topple the EPS administration is being spoken of as a desire to overthrow “Amma’s government” and appoint a “Mannargudi regime.”
Dhinakaran, over the past few weeks, has been focused on controlling the party rather than the government. The two party organs, Jaya TV and Namadhu MGR, are in the family’s control. But the united party will have a better chance of getting back the frozen two leaves symbol from the Election Commission.

Jaya TV kept airing visuals of Sasikala announcing Palaniswami as the chief minister at the Koovathur resort on 14 February, the day she was convicted by the Supreme Court in the Disproportionate Assets case and ordered to go to Bengaluru Jail. Sasikala calls OPS a ‘drohi’ (betrayer) even as EPS is seen falling at Sasikala’s feet, gratitude written all over his face.

Tamil Nadu’s political theatre could not get more Shakespearean.

1. The AIADMK reported 95% attendance at the meeting of 2,000 party members; 18 lawmakers loyal to Sasikala skipped the meeting, which voided her appointment as interim general secretary and so also her appointment of Mr. Dinakaran as deputy general secretary last February. Mr. Dinakaran’s orders do not bind the party, party leaders said after the meeting.
2. The meeting ratified the appointment of Deputy Chief Minister O Panneerselvam as the chief of the 11-member steering committee of the party. It also formalized the merger between the factions led by Chief Minister E Palaniswami and Mr. Panneerselvam, which happened last month after long and bitter negotiations.
3. The expulsion of VK Sasikala was one of the key demands of the faction led by Jayalalithaa loyalist O Panneerselvam, who had rebelled earlier this year after VK Sasikala forced him to step down from the Chief Minister’s post.
4. After former Chief Minister Jayalalithaa’s death in December, VK Sasikala, her longtime live-in aide, had taken over the party. Mr. Panneerselvam, who had filled in for Jayalalithaa as Chief Minister on several occasions, had taken over the top post in the government.
5. Under the terms of the merger, Mr. Pannerselvam, who had been the Chief Minister before Mr. Palaniswami, was made his deputy — the key party post for him was seen as balancing out the come down.
6. TTV Dhinakaran, who has been making an all-out effort to claw back to power, claims to have the support 19 lawmakers and has sided with the opposition DMK to demand that Chief Minister Palaniswami face a trust vote.
7. DMK leader MK Stalin, who met the Governor on Sunday, says together with Mr. Dhinakaran, they have 119 legislators. The halfway mark in the 234-member assembly since the death of former Chief Minister J Jayalalithaa stands at 117.
8. The united AIADMK says they have the support of nine lawmakers from the Dhinakaran camp and hence a majority figure of 124.
9. TTV Dinakaran has said they want the Chief Minister to resign, “otherwise we will not hesitate to bring down the EPS government.”
10. Yesterday, a lawmaker in his camp filed a petition in the Madras High court asking that the General Council meet today to be put on hold. The court dismissed the petition but said any decision by the General Council would be subject to its decision, which may be announced during the next hearing on October 23.
11. J Jayalalithaa will be the AIADMK’s “eternal general secretary,” Tamil Nadu’s ruling party said today, scrapping the post and sacking VK Sasikala, who is in a Bengaluru prison. The party will be run by Deputy Chief Minister O Panneerselvam as Chief Coordinator and Chief Minister E Palaniswami as his assistant. Today’s meeting made a merger between factions led by the two leaders formal and ended the primacy of Ms. Sasikala – who took over as party chief after Ms. Jayalalithaa’s death in December last – and her nephew TTV Dhinakaran. Today’s decisions are, however, subject to the approval of the Madras High Court which allowed the meeting to be held, dismissing a petition by Sasikala loyalists to put it on hold.

Sidelined AIADMK leader TTV Dhinakaran, on Monday, fired a fresh salvo threatening to bring down the AIADMK government if their demand to change the CM and his deputy CM were not met. “We are trying to change CM Palaniswami. If not possible, we have resolved to bid a goodbye to the present government,” he warned.

Dhinakaran, who claims 21 party legislators behind him, said he would work towards bringing down the K Palaniswamy government. “You (Chief Minister Palaniswamy) and others have no moral right to sit in positions of power that was once wielded by Jayalalithaa. We will send this government home,” Dinakaran told a press conference.

Dinakaran also said, “DMK is our main challenger, and we’ll fight against them, and win the elections. The ruling faction is spreading the falsehood that we are in alignment with DMK.”
Following the death of Jayalalithaa, the party split into three factions led by Sasikala, Palaniswami and former chief minister O Panneerselvam. The Election Commission froze the party’s ‘two leaves’ election symbol due to competing claims.

Last month, the factions led by Palaniswamy and Panneerselvam merged. The merged group held a general council meeting on September 12 morning and voted to oust Sasikala as general secretary. Sasikala, a long-time aide of Jayalalithaa, is in jail in a corruption case.

The general council meeting was held at a time when the opposition led by the DMK has accused the AIADMK government led by Palaniswamy of having lost the majority in the assembly and demanded that it prove its majority on the floor of the house.

In the 235-member Assembly, there are 234 members, including one nominated member without voting rights. One seat remains vacant following the death of Jayalalithaa last year. Effectively, the number of legislators with voting rights in the Assembly is 233. The number of legislators opposed to the government is 119, including the DMK and allies with 98 and Dhinakaran faction’s 21.
CM Edapadi asked as to how can this TTVDhinakaran who is not even a primary member of AIADMK can remove party office bearers?

It is indeed shocking that even Sasikala and her nephew Dinakaran with their hidden agendas have managed some supporters to protest against their expulsion from the ruling party.
Are the people of Tamil nadu so naïve not to comprehend the politics of Sasikala-Dinakaran in the state?

Now that curtains are almost down to him and his aunt, will Dinakaran go to Karnataka where his supporting MLAs are kept as political captives? His presence in Karnataka would strength for his aunt in Bangaluru jail for their corrupt practices without even being an MLA?