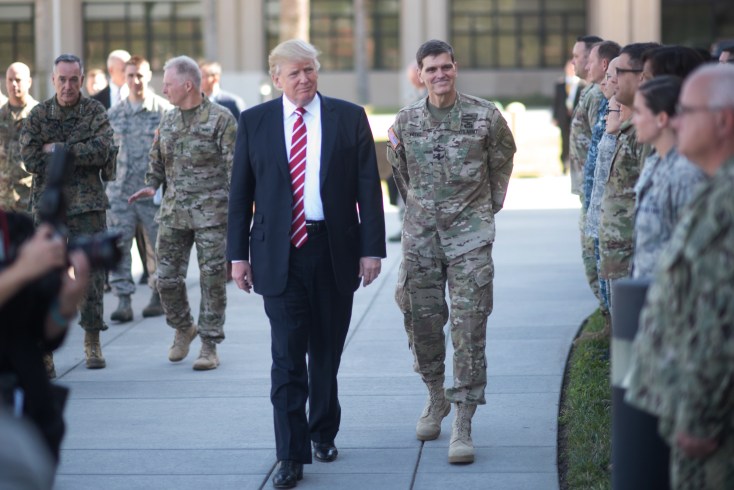 While the fighting continues and work remains to be done in Afghanistan, progress there shows the president’s South Asia Strategy is working, the commander of U.S. Central Command told Pentagon reporters Thursday.

Speaking from Centcom headquarters at MacDill Air Force Base in Tampa, Florida, Army Gen. Joseph L. Votel said Afghanistan’s security forces are improving, but need more time and support to contend with both Taliban and Islamic State of Iraq and Syria fighters.

“They are fighting and they are taking casualties, but they are also very offensive-minded, inflicting losses on the Taliban and [ISIS-Khorasan] daily, while expanding their capabilities and proficiency every day,” Votel said. ISIS-Khorasan — also known as ISIS-K — is the Khorasan province branch of ISIS, and it is active in Afghanistan and Pakistan.

Cause exists for “cautious optimism” that the strategy is working, the Centcom commander said.

The most dramatic evidence of success was shown recently when the conditions-based approach allowed Afghan President Ashraf Ghani and the Afghan national defense and security forces to set up conditions for the first nationwide cease-fire, he said. Although the cease-fire was temporary, all parties respected the terms and there were no reported breaches, the general added.

“The cease-fire demonstrated the increased desire for peace, not only from the Afghan people, but also from the belligerents in the conflict,” Votel said. “We saw numerous instances of this during the cease-fire, and we have seen many since its conclusion, even in the midst of ongoing combat operations. Our campaign approach of increasing military pressure provided the time and space for diplomatic and social pressure to pursue this opportunity.”

Other examples of ongoing military pressure include increased kinetic strikes in support of the Afghan forces, targeting Taliban revenue-generation mechanisms, and making great progress in expanding the coalition’s train, advise and assist mission, he noted.

“All six Afghan National Army corps have been frequently engaged in offensive operations simultaneously, and at one point this spring, they were conducting offensive operations in 13 of … 34 provinces at the same time,” the general said. “This is testament to the great work by not only our forces, but also others in the NATO-led coalition.”

“Through implementation of the inherent law, they are replacing older leadership with a new generation of Afghan officers and commanders whose principal experience is driven by the relationship with the United States and other coalition forces, and in association with our modern military education training models and practices,” the general explained.

And despite security challenges, the Afghans successfully registered nearly 9 million people — 70 percent of eligible voters — for the upcoming parliamentary elections, he said.

Since the Afghans took the lead for their security in August 2014, strong continued international support for the Resolute Support mission has been sustained, Votel noted. “This year, 29 of 39 NATO allies and partners increased their military or financial commitments to the campaign,” he said. “Significantly, we welcome our Gulf partners from the United Arab Emirates and Qatar to the Resolute Support mission.”

At the recent NATO summit, international partners agreed to extend funding to the Afghan security forces through 2024. “This is noteworthy and will provide us both time and resources to fulfill the intent of the president’s South Asia Strategy,” the Centcom commander said.

While taking a conditions-based approach, “we and our Afghan partners are moving forward with a sense of urgency and purpose to ensure that we don’t miss the opportunities that are being afforded by this continued support from the international community, or that have been created on the ground through activities like the recent cease-fire,” Votel said.

Overall, Resolute Support has witnessed remarkable changes in the environment, largely driven by the new strategy, the general emphasized.

The Afghan people and many Taliban members have become more ready for peace, he added, as evidenced by peace marches, local and international religious condemnations of the insurgency, broad diplomatic support to the Afghan-owned peace process, and the cease-fire, he said.

“This is a South Asia strategy, and cooperation from Pakistan remains key to accomplishing the overall objective of a durable political settlement in Afghanistan,” Votel said. “We continue to work closely with Pakistan to help them fulfill the important role that they have indicated they want to play. Now is the time for them to step forward.”

US Department of Defense