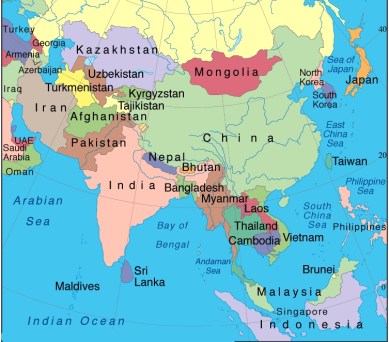 South Asia is one of the most unstable regions of the world. Last year, the subcontinent saw old issues becoming more complex and new problems that will continue to shape and influence its countries’ domestic politics and the security environment this year. This article aims to point out three critical prospects for South Asia throughout the year.

In India, eight crucial state elections are going to be carried out throughout the year in Meghalaya, Tripura, Nagaland, Karnataka, Mizoram, Chhattisgarh, Madhya Pradesh and Rajasthan. PM Narendra Modi will most likely continue to campaign for the BJP candidates, eyeing to spread his influence across the country and prepare the ground for 2019 general elections. Therefore, conflicts regarding caste, religion and social organized groups (such as farmers in Karnataka) will be the key in political speeches and actions.

Meanwhile, India’s regional geopolitical context might encourage it to act tougher towards its two complicated neighbors, China and Pakistan. About the former, the Doklam standoff in 2017 showed that India is willing to stand its ground on the border and water-related disputes, displaying a change of actions currently in course in India’s strategic calculations. While official statements highlight the “peaceful dialogue” between New Delhi and Beijing to resolve bilateral conflicts, military buildups are moving forward in Northeast India.

China’s close ties with Pakistan through the Economic Corridor (CPEC), the re-election of Xi Jinping and the launch of Belt and Road initiative – they all mean stretching the Chinese presence in South Asia and the Indian Ocean even further. India will be pressured to respond to these challenges from both the domestic dimension and the extra-regional powers, especially the U.S. The election of a communist leader in Nepal’s general elections makes the entire context a bit more delicate since New Delhi seems to be losing the influence of an important buffer state. The friendship with Bhutan, in contrast, seems more solid since the Doklam standoff.

Dealing with Pakistan, water will continue to undermine any attempts of conciliation between both countries. Kashmir will continue to be the spotlight: not only because of the presence of traditional extremism groups but also due to water energy projects of CPEC planned for some of the disputed rivers in the region. Additionally, India’s evolving ties with the U.S. in security matters also hamper Indo-Pakistani relations, as Islamabad looks for Chinese support to contain U.S.-India influence in South Asia. Like in the Cold War, South Asia tends to be, once again, swallowed by power competition – this time between China and the U.S. – having India and Pakistan as local areas of influence. If India wants to maintain its autonomy of actions and its multi-alignment approach, it is therefore vital for it to not let its regional and global aspirations to be manipulated by extra-regional countries.

The year of 2018 will also be crucial for Pakistan’s internal and external affairs, as it did end 2017 in bad shape in both levels. The ousting of former PM Nawaz Sharif without a proper trial displayed the interference of the Army in politics and led the country to a new cycle of institutional crisis. Furthermore, the release of Lashkar-i-Taiba’s and Jamaat-ud-Dawah’s (JuD) leader Hafiz Saeed showed yet again that the government is willing to continue providing safe havens for terrorists. The announcement of JuD’s political party – the Mili Muslim League – made by Hafiz Saeed himself right after his release is another example of the growing threat of extremists in Pakistan’s politics, especially if one bears in mind that it is a nuclear state in a state of fragility. The unfolding of events this year and how the current government will respond to these challenges need to be carefully watched by its neighbors since the access of terrorists to these weapons could be eased by their growing influence.

Pakistan’s foreign policy, on the other hand, will be profoundly influenced by the state of domestic affairs. At the present moment, it is dependent on China, and there is no evidence to believe this will change anytime soon. The ‘special friendship’ shared between both countries is rarely compared to a new kind of colonialism, as China gets the most advantage from its infrastructure entrepreneurship and also as Pakistan’s debt increases. The connivance of Islamabad with extremist groups resulted in the recent pressures by the U.S., which cut off much of the aid provided for the South Asian country. It probably won’t change much rather than push Pakistan closer to China, thus worsening its dependency pattern. There are some indications that Islamabad might reach further to Iran and Saudi Arabi to reduce its diplomatic isolation, but Beijing’s interests will continue to drive much of Pakistan’s foreign policy.

Third, the Rohingya refugee problem will continue to impact Bangladesh’s internal security with the potential for spillover to India. The Bengali government has signed an agreement with Myanmar, later in 2017, to send the refugees back to the Rakhine state. However, many Rohingyas are still crossing the border, running from persecution and genocide. Is it estimated that approximately 650,000 Rohingyas have reached Bangladesh since August 2017 and a few days ago, reports showed that 90 percent of the recent arrivals are undernourished, according to the Economic Times? The same report points out that nearly 48,000 new babies are expected to be born in the refugee camps, worsening the overpopulation issue of Bangladesh.

Since the Indo-Bengali borders are porous and still not sealed, many Rohingyas have also fled to India, with no concrete response from the government, with an estimate of 40,000 residing illegally spread across a few Indian states. As the international community pays little attention to immigrant humanitarian crisis outside Europe, it would be important for India to join forces with Bangladesh and Myanmar and lead the path to deal with the Rohingya issue. It is not only a matter of national security but also of regional leadership and prestige.

Last but not least, the war in Afghanistan has no solution in sight. Donald Trump’s ‘new’ strategy for South Asia highlights Pakistan’s role in providing a safe haven for terrorists, yet it doesn’t differ much from the previous document. There is no solution for Kabul without Pakistan, and even though Trump seems to have a more rigid approach, little has been done to force Islamabad to act against insurgents. The Afghan conflict also matters to India as it seeks to enhance its influence in Central Asia and the Persian Gulf. Last year saw the first shipping of wheat to Afghanistan through the Chabahar Port and the launch of an air corridor linking Mumbai to Kabul. New Delhi has welcomed the new strategy, but it is expected that it will keep acting as an independent actor in Afghanistan.
Whatever comes out from the events above this year, it indeed will be another complicated year for South Asia.