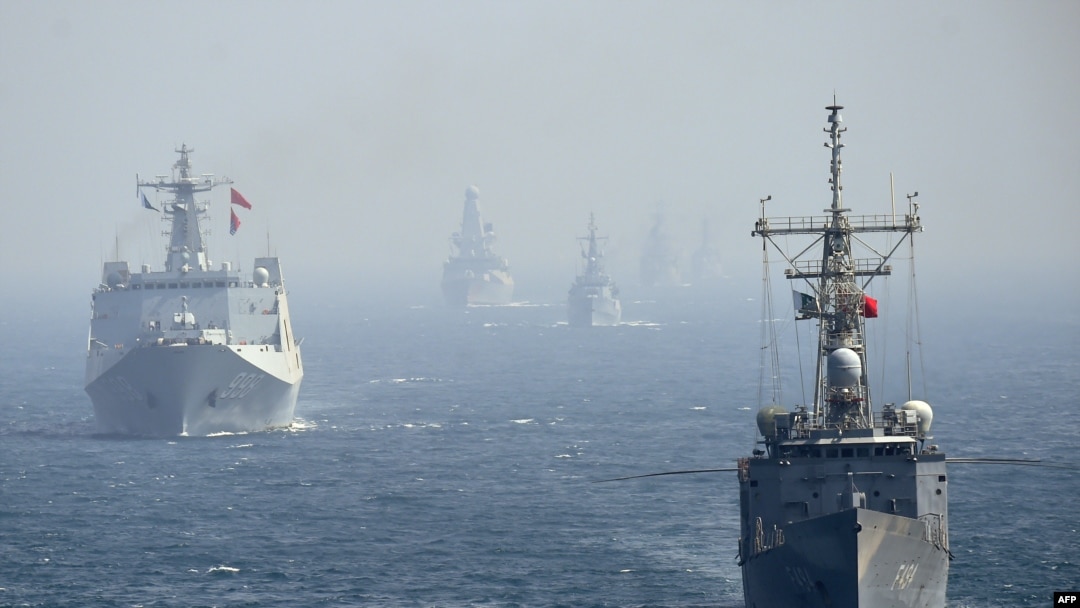 China and Pakistan kicked off a four-day joint maritime exercise on Sunday to bolster naval cooperation which some analysts see as a cause of concern for India.

PLAN spokeman Liu Wensheng told Chinese media that the exercise was “arranged according to the annual military cooperation plan of the two navies, has nothing to do with the regional situation and is not targeted at any third party.”

Participating ships from the PLA Eastern Theater Command include the guided-missile frigates Xiangtan and Shuozhou, the comprehensive supply ship Qiandaohu and one submarine along with one early warning aircraft, two fighter jets and a helicopter. Pakistan sent the frigate Taimur, the second of four Type 054A/P ships built by China for Pakistan’s navy.

The PLAN said the joint maritime exercise aimed to “push forward development of the China-Pakistan all-weather strategic partnership of cooperation.”

The drills follow last month’s visit to China by Pakistan’s chief of Army Staff, Gen. Qamar Javed Bajwa. During the trip, he held talks with Zhang Youxia, one of China’s top generals and vice chairman of the Central Military Commission.

“Naval cooperation between China and Pakistan has been going on for quite some time, but is gaining momentum now,” said Sana Hashmi, an Indian analyst and visiting fellow at the Taiwan-Asia Exchange Foundation in Taipei.

“This exercise in particular is being noticed in India as China’s reach in the IOR [Indian Ocean Region] will be bolstered with Pakistan’s assistance. Definitely a cause of concern for India,” she said.

The training is the second Sea Guardians exercise, the first was held in January 2020 in the North Arabian Sea.

The Press Trust of India (PTI) said the Arabian Sea is strategically important as major Indian ports are located there and it provides entry to the Indian Ocean where China recently built a logistics base at Djibouti in the Horn of Africa.

Beijing also has acquired the operational control of Pakistan’s Gwadar port in the Arabian Sea, which connects with China’s Xinjiang province by land as part of the U.S. $60 billion China Pakistan Economic Corridor (CPEC).

It also obtained a 99-year lease of Sri Lanka’s second largest port, Hambantota, and is developing it as part of the Belt and Road Initiative.

“CPEC exists primarily to extend and strengthen China’s reach to the IOR and that’s one of the reasons besides the sovereignty issues that India opposes CPEC,” said Hashmi, adding that the Sino-Pakistan growing ties “will further bolster the Quad and encourage them to strengthen maritime cooperation.”

The Quad, or Quadrilateral Security Dialogue, is a strategic security dialogue among Australia, India, Japan, and the United States.

Beijing has said the group represents an attempt to form an “Asian NATO.”

The Pakistan Navy ordered four of the frigates from China in 2017 – two were delivered this year. It also signed a multi-billion dollar deal to acquire eight submarines from China by 2028.

Reported by Radio Free Asia, an online affiliate of BenarNews.