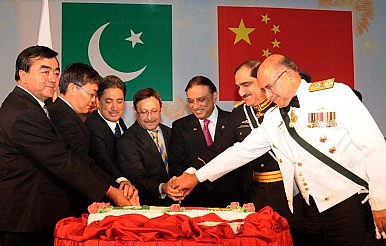 How much is Pakistan really benefiting from its “all weather friendship” with China?

In recent times, there has been a lot of talk that the China-Pakistan “All Weather Friendship” is at an all-time high. The strongest reiteration of this point has been the $46 billion China-Pakistan Economic Corridor (CPEC), which is being dubbed by many as a game changer not just for the bilateral relationship, but for Pakistan’s economy. There is not an iota of doubt that the China-Pakistan axis has strengthened in the strategic sphere, and if CPEC does go through it will have significant strategic and economic consequences. Yet it is also time to do a rational appraisal of the economic relationship between Beijing and Islamabad, and not view everything through the prism of CPEC.

The Beijing-Islamabad Relationship: Who Benefits?

While it is easy to use catchy terms and phrases to define the economic relationship, what is often obliterated by strategic analysts in Pakistan (and not watched closely enough by sections of the strategic community in India) is the nature of the economic relationship between China and Pakistan, and the increasing skepticism within the business community vis-à-vis this lopsided relationship. Despite a 400 percent increase in Pakistan’s exports to China within a decade, China still holds the lion’s share of trade value. In 2014, China was exporting goods worth $9.3 billion to Pakistan, whereas the latter’s exports to China were $2.62 billion.

Looking at the economic relationship between China and Pakistan, what clearly emerges is that Pakistan has not been able to benefit from the free trade agreement (FTA) signed with China.

The tariff concessions in the first phase of FTA were on raw material exports and finished goods imports from China. A study by the Pakistan Business Council in 2013 maintained that Pakistan did not benefit from the FTA with China for a number of reasons: Pakistan’s Ministry of Commerce was not well prepared and the business community, the most important stakeholder, was not consulted before signing the deal. Among the biggest casualties of this FTA has been Pakistan’s textile industry, which cannot compete with China, and is also simultaneously losing ground to its neighbors Bangladesh, Sri Lanka, and India.

Nasir Jamal,  in an article titled “Mother China: A ‘Chinese revolution’ sweeps across Pakistan” for Dawn, also highlights how undue concessions to Chinese investors are having an adverse impact on a number of sectors in Pakistan. For instance, an ongoing 1,000 MW solar project in Bahawalpur requires thousands of kilometers of cable, but the government waived duties on imports of goods required for solar projects, due to which local manufacturers lost a tremendous opportunity. The 2015 annual report of Pakistan Cables considers the China free trade agreement alarming and unfair to the local industry:

….benefits provided by the Pakistan government to power projects allows for the import of cables at reduced rates of duty and sales tax exemptions. Such benefits do not put the local industry at a level playing field with imports. If the government does not address these issues through policy change, your Company will face substitution from imports in certain areas.

Meanwhile, Pakistani Prime Minister Nawaz Sharif, who has been in favor of strengthening trade ties between India and Pakistan, had spoken about “trade not aid” after taking over as PM in 2013. Currently the economic relationship with China seems to be skewed in favor of Beijing, though large sections of the intelligentsia in Pakistan would be in denial. Needless to say, Beijing, unlike Uncle Sam, is not as generous in granting aid, and does not believe in any free lunches either.

The Need for Understanding This Skewed Relationship

Understanding the skewed relationship between China and Pakistan is important for a number of reasons. Pakistan needs to do so for its own economic interests, and if possible course correct, though currently this seems a far cry given the ever burgeoning strategic relationship between Beijing and Islamabad. At some stage domestic resentment is bound to increase,  and could lead to major upheavals.

Interestingly, the security establishment, a large number of analysts, and sections of Pakistan’s business community oppose a strong economic relationship with India on the grounds that it will hurt Pakistan and only benefit India. India’s experience with Bangladesh has been to the contrary. Dhaka’s decision to gradually open up its economy to India has resulted in an increase in bilateral trade, with the former’s share of exports rising consistently over the past decade. India’s investments in Bangladesh’s infrastructural sector too have increased.

While in the short run any fundamental change in the Pakistan-China economic relationship is unlikely, in the long run, it remains to be seen if the business community in Pakistan will continue to accept the unequal hand they have been dealt.